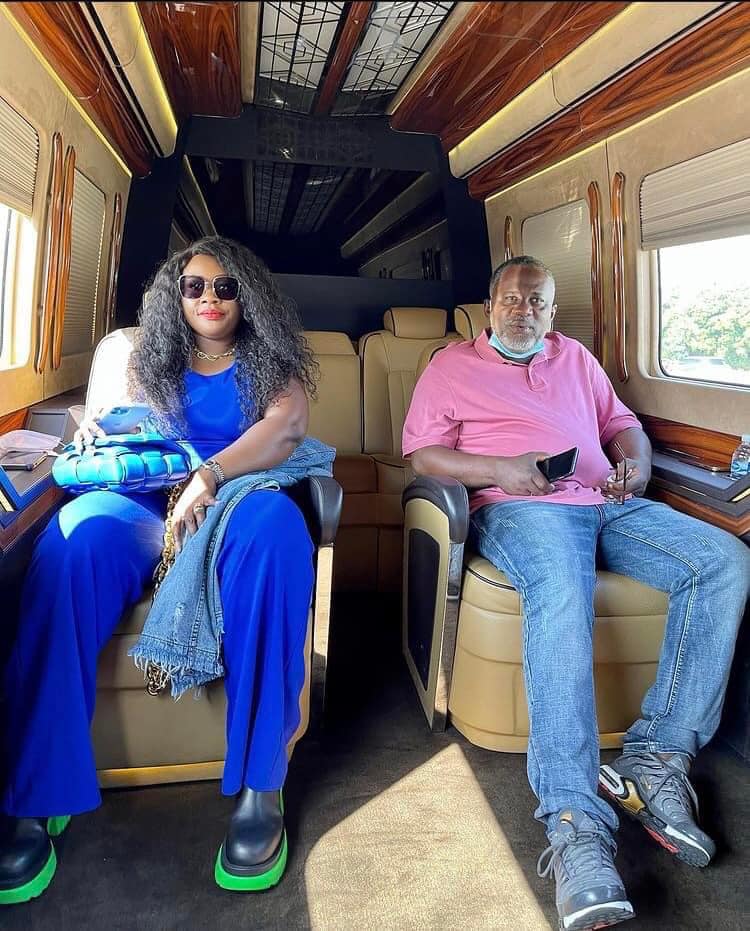 MONROVIA, LIBERIA– Liberian kleptocracies come apart for all sorts of reasons, but it’s a rare delight that the ordinary people’s anger to date is being triggered, in part, by Mrs. Vivian Innis-McGill’s freely decadent taste and history of luxury shopping while the share number of Liberian living below the international extreme poverty line (US$2.15 per person per day) has increased to 34.6 percent (2022) compared to 31.1 percent in 2019 and 27.6 percent in 2016.

Always the elegant dresser, Madam Innis-McGill, secretly given the moniker ‘Saint Laurent Vivian’ by young Liberians for her unending taste for expensive Saint Laurent Luxury handbags and other Luxury brand materials, is reported as being under scrutiny by international anti-corruption organizations and Women Rights Groups for her role as “wife” in adding and abiding “matrimonially” the corrupt actions of her now Global Magnitsky Act sanctioned husband, Nathaniel F. McGill.

“I don’t think of myself as a poor deprived “ghetto girl” who made good. I think of myself as somebody who from an early age knew I was responsible for myself, and I had to make good”. Mrs. Innis-McGill posted on her social on January 27, 2021.

Mr. McGill who was a few months ago, Minister of State for Presidential Affairs, was accused by local Anti-Corruption organizations and the United States Government of rampant corruption that threatened the democratic stability and peaceful development of Liberia.

In a report published on August 15, 2022, the U.S. Department of the Treasury’s Office of Foreign Assets Control (OFAC) designated Liberian government official Nathaniel McGill (and others) for involvement in ongoing public corruption in Liberia pursuant to Executive Order (E.O.) 13818, which builds upon and implements the Global Magnitsky Human Rights Accountability Act and targets perpetrators of serious human rights abuse and corruption around the world.

Through his corruption, Mr. McGill undermined democracy in Liberia for his “own personal benefit,” said the Under Secretary of the Treasury for Terrorism and Financial Intelligence.

As the wife of the now disgraced former Minister of State for Presidential Affairs, Mrs. Innis-McGill recently came to the attention of international Anti-Corruption organizations. According to people close to the “attention”, Mrs. Innis-McGill was not known among “upper-class” and “financially well-positioned” Liberians until her husband became Minister of State for Presidential Affairs.

Local reporters and observers said, Madam Innis-McGill became a regular in the world’s fashion capitals, and well known in high-end stores in Monrovia and beyond for her extravagant purchases of jewelry, collection of designer shoes, handbags, and not least, for her unquenchable appetite in expensive travels and exorbitant lifestyle. According to local reports, her habit of dropping “hard cash” in the best shops in Paris, Rome, Dubai, Singapore, New York, and London, is not surprising because of the direct support she got from her husband’s now-exposed corrupt finances.

Observer of “Saint Laurent Vivian” said she famously purchased the same luxury purse and shoes as the now infamous “Gucci Grace,” of Zimbabwe in Paris for an undisclosed amount which she flaunts on her social media.

It is rumored in Monrovia that Madam Innis-McGill once spent $40,000, a spree that many in her closed circle with knowledge of the event have chosen to remain tight-lipped about as a result of fear of being harmed by her powerful husband who has remained, “behind the cabinet” close confident to the President despite his international sanction and resignation but nevertheless her extravagant affairs masked under her “carefully crafted public image” have stuck in Monrovians imagination.

Sanction against her husband, Nathaniel F. McGill may have slowed their international shopping and expensive travels only somewhat since August 2022, but before the US government punishing sanction, Madam Innis-McGill and her husband Nathaniel F. McGill were welcome in many Capitals and could traverse fashion hotspots in the European Union.

As of this reporting, Madam Innis-McGill, remains, unquestioned and unlinked to her husband’s immoral actions, corrupt wealth, and properties despite being a direct influencer and beneficiary.

A source close to the McGills stated that Mrs. Innis-McGill wields immense influence over her husband, while he served as Minister of State for Presidential Affairs. The source also informed that she used her Public Policy expertise from the Heller School for Social Policy and Management at Brandeis University to provide “behind the curtain advise” to her husband on critical governmental and national security matters and persuaded his actions.

It is rumored that she is the architect behind his defiant current Margibi County senatorial bit, despite overwhelming objections from the Liberian public and international partners. A power move by the McGill’s to regain public office and remain relevant to President Weah and in the political conscience of Liberians.

A deceptive strategy she has carefully cultivated from her now infamous idol, the former first lady of Zimbabwe, Grace Mugabe, widely known as ‘Gucci Grace’.

It is also reported that Saint Laurent Vivian’s wardrobe is the envy of many high-valued women in Monrovia. Her extensive collection of Salvatore Ferragamo shoes ($4,500-$10,000), Jimmy Choo ($3,800-$5,000), Louboutin, Louis Vuitton, Fendi, Prada, Proenza Schouler, Bally, and Tod footwear, etc is one to marvel at. In fact, she wears shoes from mostly Italian designers.

It’s axiomatic that beneficiaries of kleptocracies routinely excuse themselves from the practice of altruism – rather, the idea is to keep raking in the cash, even if, as in the case of the McGill’s in Liberia; to the detriment of Liberia’s democracy, people and national development. There are much bigger discussions underway in Monrovia right now that Mrs. Vivian Innis-McGill is still in the position of Liberian Diplomatic and Official passports, which provides her diplomatic protection when in foreign countries despite her husband’s resignation from the government.

It was also reported on January 8, 2021, by local media in Monrovia that Mrs. Innis-McGill was allegedly using her husband’s account through his VISA and Master Cards to purchase several very expensive items online. The investigation through the GT Bank reconciliation of internal audit revealed that the extravagant online shopping went on for a couple of months before the international companies red-flagged the account for money laundering. The amount taken from the account is rumored to be to over $50,000 United States Dollars.

Investigative financial reporters in Monrovia have been informing the Liberian public that they believe Mrs. Innis-McGill may be in the possession of secret bank accounts for her husband. They believe that the hidden cash in these bank accounts amounts to over 4.5 million United States dollars. They have called on the United States Embassy in Monrovia and international organizations to put a no-fly sanction on Mrs. Innis-McGill and open a public financial investigation on her for aiding and abetting her husband’s corrupt actions.

Madam Vivian Innis-McGill, according to these investigative reporters is still welcome in the United States and the European Union despite her husband’s global sanction.