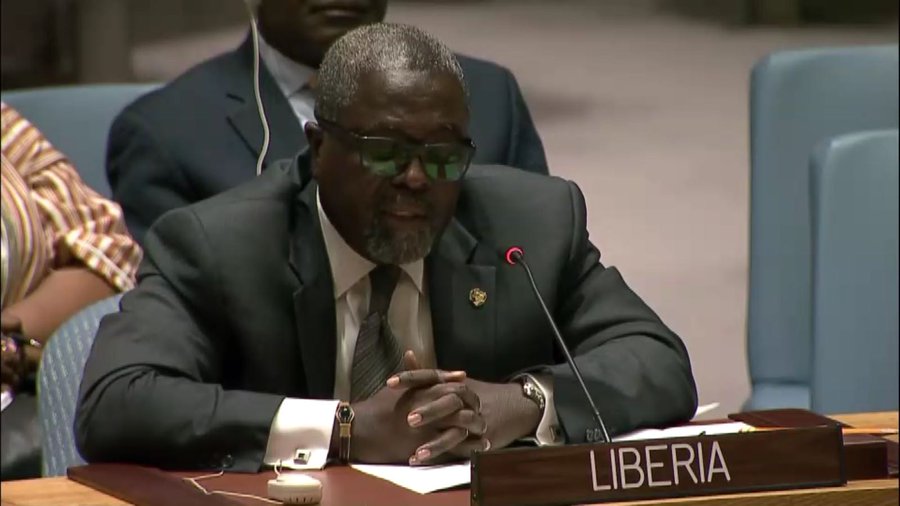 MONROVIA-LIBERIA, In a speech seasoned with eloquence, grace, intelligence, and history, former Information Minister and Liberia’s Ambassador to the United Nations, Lewis Brown pledged his unwavering support to the presidential vision of the popular opposition leader Alexander Benedict Cummings.

In a well-crafted live radio broadcast to the nation on the famous Truth FM in Monrovia, Mr. Brown, a formidable member of the National Patriotic Party (NPP) said, he has weighed the 2023 political landscape and adjusted rational options and concluded that he is throwing his weight behind Alexander Cummings, fashionably know as ABC, because of his appealing vision and leadership experience to get things done.

In a moving position crafted in the spirit of John Fitzgerald Kennedy’s style, Mr. Brown poised with confidence stated,

“I stand with ABC [Alexander B. Cummings] because he is right. He has the character, temperament, depth of understanding, integrity, and leadership credentials to move our nation into the future we seek,”.

He added: “I stand with ABC because of the boldness of vision, the freshness of ideas, the courage to continue to fight when it seems easier to surrender, and the quality of leadership experiences he has achieved to get things done.”

Cummings and the Collaborating Political Parties have gone through a turbulent period following the exit of the two constituent parties- the Unity Party headed by ex-vice president Joseph Nyumah Boakai and the All Liberian Party (ALP) of businessman Benoni Urey.

Dr. McIntosh, pledging his support, said he was disturbed and deeply concerned about the misdirected path Liberia is taking.

Following his footsteps, the former Information Minister said Cummings is the right choice for the changes Liberians must make to realize the tomorrow we seek.

He said that there are times in the life of nations when they must choose what is right over what is easy; noting that he was hopeful that in 2023, Liberians will choose “what is best for our nation, before we let ourselves be partisans, fighting for what is best for our parties.”

President Weah and his supporters say he will be the favorite to win owing to his “numerous development initiatives”, which also many ordinary Liberians, academics, and diaspora Liberians see as “presidential pet-projects” for political votes maximization instead of the People-Interests National Developmental Projects like modern Universities, medical centers, and public services efficiency systems.

But Brown said it does not really matter how many roads, bridges, and buildings may be constructed; if Liberians continue to remain poor, dependent, and without quality education, it embellishes the body of a stained soul.

“We thereby lose our way, undermining democracy, and risking the future peace and security of our nation,” he said.

He added that it was the right time to change the dysfunctional and discredited system of governance rather than continue to manage it and Cummings was the best alternative to do so.

“I stand with ABC because, in 2023, we must elect a leader to be President rather than elect a President we hope might become a leader. ABC understands this. He understands that we must fix the dysfunctional system that lifts leaders up and keeps people down. We must lift Liberians up, and offer the chance for all to improve their lives. In 2023, with ABC, we must stand up for Liberia. We must stand up for real change. We cannot lose hope. We cannot be frightened.”

Addressing the populace, the former Senatorial candidate of Montserrado County said irrespective of tribe, party, gender, or religion, it was the right time to get involved; adding, that together, “we can win for Liberia.”

He acknowledged that – “whatever sacrifice we must individually and collectively make – the cause to change the direction of our country is a historically just cause, for which, we cannot and will not fail.”