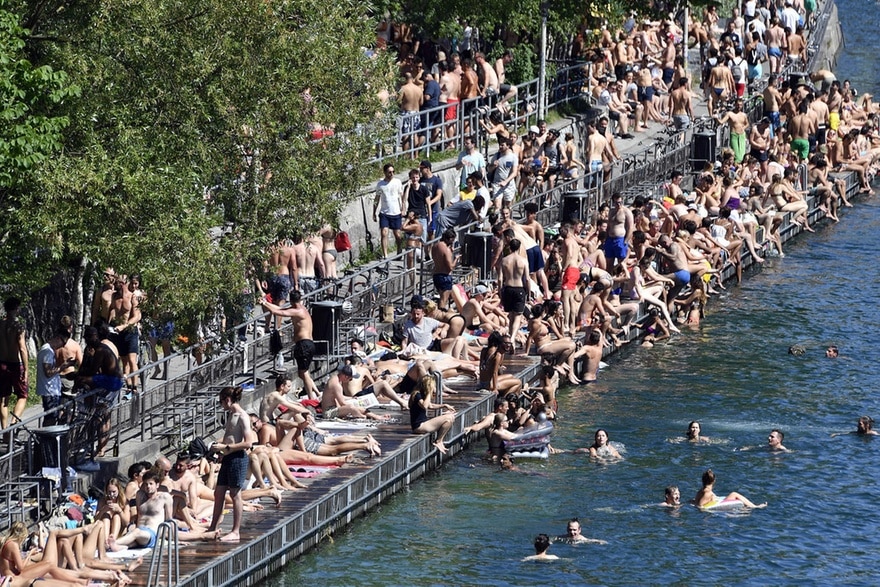 In France and the UK extreme heat warnings were issued while northern Spain recorded temperatures of 43C (109F) on Monday.

Deadly wildfires in France, Portugal, Spain and Greece have forced thousands of people to evacuate their homes.

The UK is expected to see its hottest day ever and experts say parts of France face a “heat apocalypse”.

Two people were killed by forest fires in Spain’s north-western Zamora region and trains in the area were halted because of fire near the tracks. An elderly couple died while trying to escape fires in northern Portugal.

Wildfires in recent days forced more than 30,000 people to flee, with emergency shelters set up for evacuees. A zoo with 1,000 animals was among the areas evacuated.

Gironde, a popular tourist region in the south-west, has been hit particularly badly, with firefighters from across France battling to control blazes that have destroyed nearly 17,000 hectares (42,000 acres) of land since last Tuesday.

“The idea that comes into my head is, it’s a monster,” said Jean-Luc Gleyze, Gironde’s regional president.

Temperatures that hovered around 40C on Monday are predicted to drop on Tuesday – but that may not bring immediate relief, as long as dry conditions and changeable winds persist, the BBC’s Lucy Williamson reports from Gironde.

The hottest temperatures have now moved to the north and east. Hundreds of people have had to leave their homes in the far north-west of Brittany, and fire has destroyed 1,330 hectares of vegetation.

The UK had one of its hottest days on record on Monday, with a high of 38.1C recorded in Suffolk, in eastern England. Forecasters say Tuesday could see temperatures top 40C, with extreme heat warnings covering central, northern and south-east England.

There were severe travel disruptions with trains cancelled and flights at London’s Luton Airport suspended when part of the runway buckled under the searing heat.

On Monday, the Netherlands recorded its hottest day of the year so far. In the south-western town of Westdorpe, temperatures reached 33.6C.

And it is expected to be hotter on Tuesday, with temperatures forecast to top 39C in southern and central regions of the Netherlands.

Forecasters say the heatwave is heading north, with Belgium and Germany expected to see temperatures around 40C in the coming days.

In Spain and Portugal, more than 1,000 deaths have been attributed to the heat in recent days. A forest fire in Losacio in the north-west left one firefighter dead on Sunday and the body of a 69-year-old shepherd was found on Monday.

Temperatures in Portugal hit 47C on Thursday – a record for July. Most of the country has been placed under high fire danger by the national meteorological office IPMA.

Several villages were evacuated after a fire in the Murça area of northern Portugal, where a man and a woman in their 70s died in their car while trying to flee the flames. Authorities are anxious to avoid a repeat of 2017, when 66 people were killed in wildfires.

In Spain, at least 20 fires are burning out of control. A passenger filmed the moment the train he was travelling on came to a temporary halt – as fires raged on both sides of the carriage near the northern border with Portugal.

Heatwaves have become more frequent, more intense, and last longer because of human-induced climate change. The world has already warmed by about 1.1C since the industrial era began and temperatures will keep rising unless governments around the world make steep cuts to emissions.