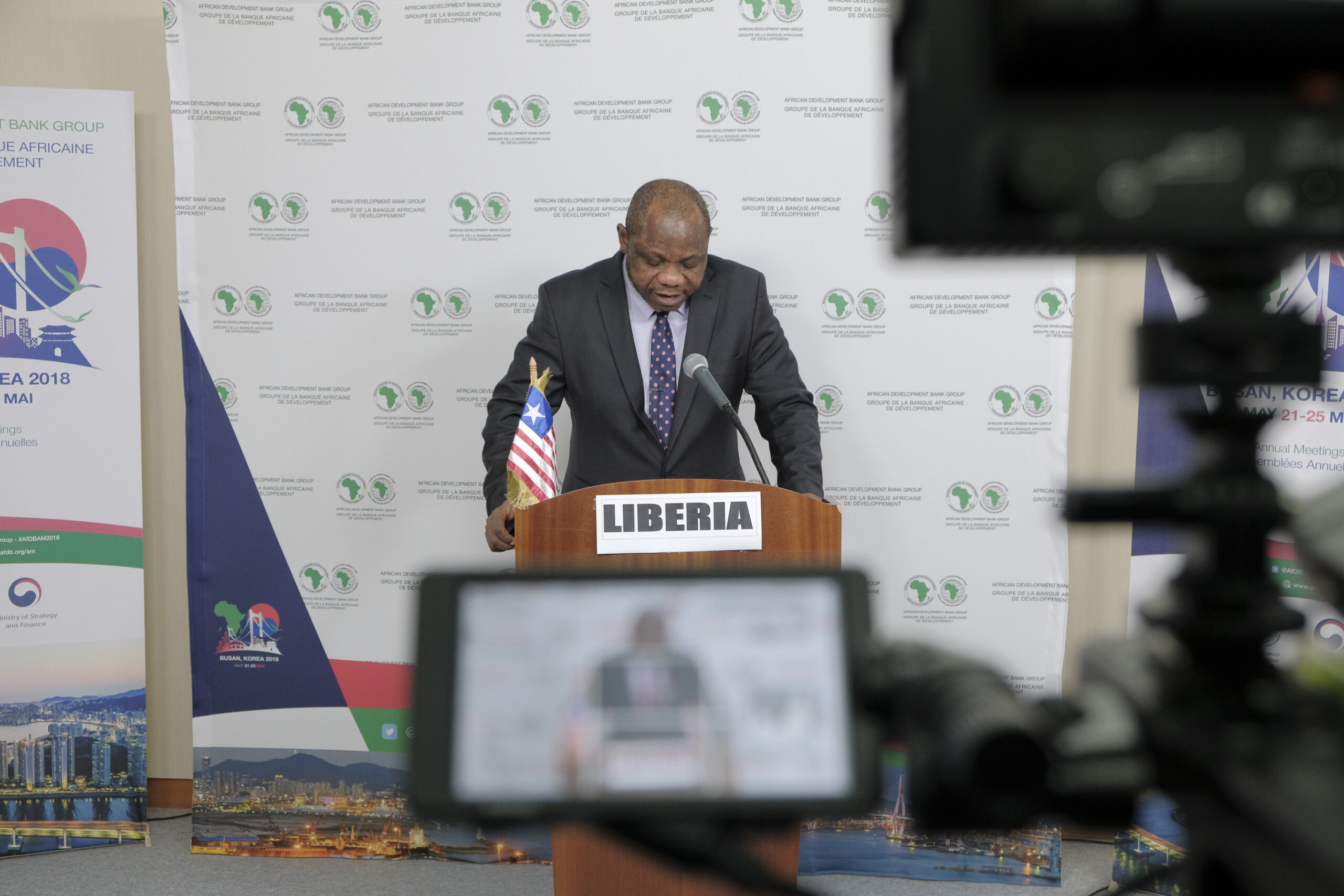 MONROVIA – Those who closely follow Liberia’s fiscal and monetary history in the last four years would not reject the proposition that the country, in the hands of a young political administration, was faced with an imminent catastrophe and doom, mainly economically and even politically. That was when a severe economic crunch hit the country owing to spiraled inflation and the propaganda of mission billions. Pundits say in real time it would take years if not decades for any political administration anywhere to beat and overcome the gloom of that magnitude hovering over the nation. But in barely two years, the Great Depression-like inflation and its attending shocks got ameliorated, setting the government and nation on a stable macroeconomic trajectory. How that magic wand was done can only be explained by the man who was in the heat of the depression, and he did so very colorfully and wittily at the ongoing Cabinet Retreat taking place in Ganta, Nimba County. The Analyst reports.

The Minister of Finance and Development Planning, Mr. Samuel D. Tweah Jr, has said there has been significant progress with the economy in the past years under the stewardship of President George Manneh Weah despite what he called the monstrous global challenges plaguing the world.

He noted that the government has managed to address some of the fundamental issues that have served as stumbling blocks to the progress of the nation.

Minister Tweah made the assertion on Monday, July 11, 2022 in Ganta, Nimba County when he gave an overview performance of the Pro Poor Agenda for Development and Prosperity(PADP), the five year flagship national development program of the government during the second day of the ongoing cabinet retreat to assess the achievements and challenges of the government and then set priority agenda to achieving set goals with the view of bringing meaningful developments to the country.

The tough-talking economist, in a synopsis of progress made during the period under review, listed stabilized wage bill of civil servants, increased revenue, the breaking of the obstacles towards a workable retirement pension system, the achievement of growth rate of 4%, fiscal discipline, prudent management of the economy, the strict adherence to the Public Financial Management law, good governance and a favorable business climate, rebuilding the confidence in the banking sector as well as the improving on the credit rating of the government from the highest debt distress status to a moderate distress status etc., adding that these feats were only made possible by the political will exhibited by President Weah.

On the challenges, he stated that it was important to note that the government inherited a broken economy with serious structural deficits, coupled with the Ebola crisis that had a turbulent imprint on the productive capacity of the country and the external shocks from the downward spiral of the prices of Liberia’s major export.

With the aid of a PowerPoint presentation, Minister Tweah displayed graphical analysis on the performance of the economy especially with the impact of inflation which was high in 2019 and measures taken by the government to trim it down to 5% and the growth trend of some of the indicators in the economy.

He explained further: “There was a peak period of inflation in 2019 but it has nothing to do with the outcome of any policy adopted by the government at the time. It has to do with the global shocks that also saw the prices of commodities going up and the macroeconomic disturbance that also affected a number of countries worldwide including our trading partners. The government was able to respond to these challenges by stabilizing the price of food and gasoline prices, which has on the one hand declined our revenue as a way of keeping inflation low and cushioning the effect of this instability.”

He praised the recovery period however stating that it is hoped that the Russian-Ukrainian war will cease because the crisis has a profound negative impact on the global economy which has an influence on the local business environment.

Amid applauds from his colleagues, Minister Tweah said that the country had a faulty record keeping system on the economy, but thanks to the administration of President Weah, there has been a paradigm shift on how the economy has been managed, referencing the measures taken by the government to consolidate all its obligations both domestically and internationally.

He said the total domestic debt of the government to date is $735m which he said extends as far back as the eras of successive administrations including William VS Tubman, William Richard Tolbert Jr,Samuel Kanyon Doe, Charles G. Taylor and Mrs. Ellen John son Sirleaf.

Giving specific examples of some of the domestic debt profile, he said the government of Liberia has a consolidated debt obligation of $500m to the Central Bank of Liberia which included borrowings dating back to years before this administration came on board and what it has also borrowed from the apex banking institution in the country. He said under a repayment term, the said debt is expected to be retired in 2029 at the pace of a refunding plan between the government and the CBL.

Minister Tweah said Liberia’s development partners are encouraged about the numbers coming out from Liberia and they are convinced that our administration is on track with how prudently it has managed the economy.

They are asking how we are doing the magic. The IMF and the World Bank and all our development partners are impressed with what we are doing despite the negative propaganda out there.

“People are even asking how it is possible that this man, George Weah whom people said he does not have the capacity to lead is doing well with the economy. So Mr. President, under your leadership this economy is changing. You inherited a broken economy and overtime you have been able to manage it for the benefit of the people and our partners are seeing it”, Tweah said.

In his post presentation interview with the media, Tweah discussed the structural challenge with the infrastructure deficit and identified roads and power supply as key areas the government is investing seriously to address because they are fundamental to changing the fortune of the country. He said the government is looking at investing $65m in the CLSG project, $20m of which has been committed for steady supply of electricity in the country while there are ongoing road projects through the country and more to be added.

He said in addition to this, the government is overstressing the fiscal envelope to employ 2,000 teachers and another sizeable number of volunteer teachers some of whom have been giving free services for up to 10 years in the country and added that all of these are indications of how the government has been striving to pay him premium to the human capital development of the country and bringing smiles on the faces of its citizens.

The Government’s fiscal chief slammed those who are in the constant habit of critiquing the government of corruption saying the detractors are basing on their allegation on the historical patterns of corruption to criticize the government and stated that during the session at the retreat, there was heated debate on the new laws being proposed by the government that will give prosecutorial roles to the Liberia Anti-Corruption Commission(LACC) in addition of having appointees at the commission been chosen from a list of people that will be chosen by a panel without President Weah or any other president having the luxury of nominating people for an appointment at LACC.

“Now you tell me, is that the government which you called not fighting corruption?”, he asked rhetorically amid cheers from the audience.

Meanwhile, at yesterday’s event a number of government officials spoke on various topics include on the topic, Revenue Performance and Mobilization Strategies by the head of the Liberia Revenue Authority(LRA), Thomas Doe Nah and the Governor of the Central Bank of Liberia, J. Aloysius Tarlue who spoke on the Status of Financial and Monetary Policies while the topic, Accountability and Transparency in Government was discussed by Mr. Garswa Jackson, Auditor General of the General Audit Commission, Cllr. Edward Kla Martin, Chairman of the Liberia Anti-Corruption Commission(LACC), Jarge R. Kowo of the Public Procurement and Concession Commission(PPCC) and Clarence Williams Director General of the Internal Audit Agency(IAA)

The retreat enters its third day today with more deliberations at the event.