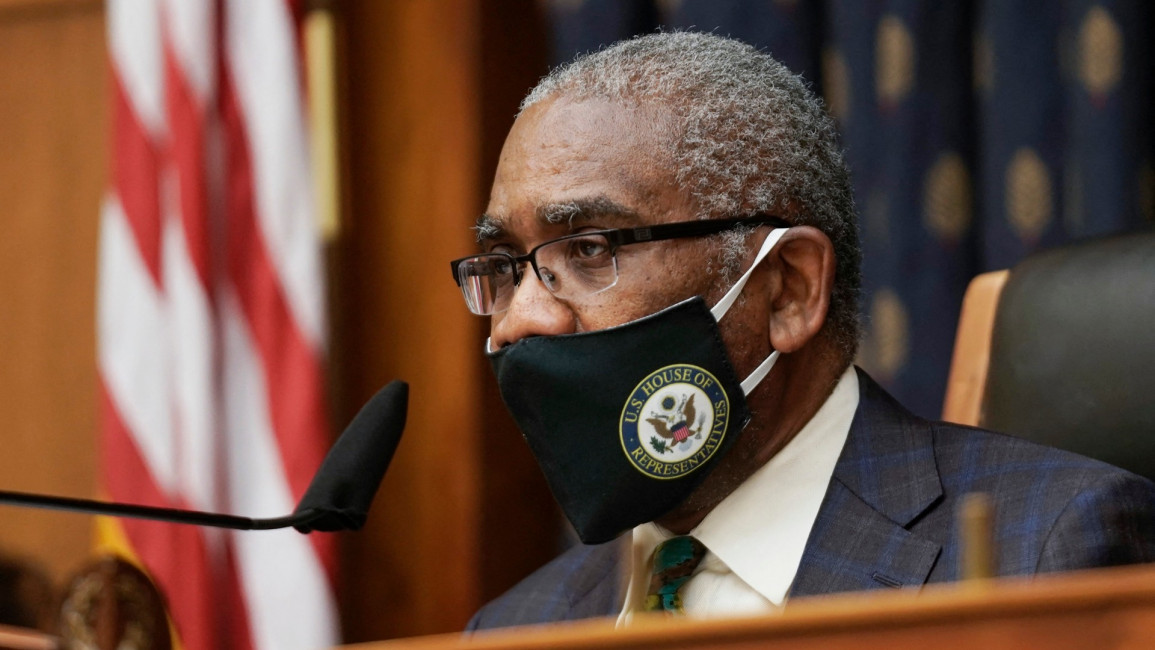 MONROVIA, LIBERIA – The Bicentennial Celebration which tends to commemorate 200 years since freed People from slavery in the United States of America settled on the Providence Island in search of universal freedom is taking the Liberia-America relationship to another level – even to the level where more sanctions on Liberian leaders and officials of government for corruption, sabotaging the economy and disrupting the peace of the country is being recommended at the U.S House of Representatives.

U.S. Lawmaker Gregory M. Meeks who chairs the Foreign Affairs Committee of the House of Representatives and the Congressional Black Caucus is sponsoring a Resolution, currently before the House, that targets sanctions on the Liberian government.

The Resolution has been dubbed “Reaffirming our commitment to support progress toward transparency, accountable institutions, and other tenets of good governance in the Republic of Liberia as it approaches the bicentennial of the arrival of the first free Black Americans to Providence Island, Liberia”.

It was submitted to the House by the Committee on Foreign Affairs on February 4, 2022 pending approval from the House.

The Resolution tends to foster relationships between Liberia and America based on its longstanding relationship and ties and improve governance in Liberia.

It calls on the U.S. government to remain committed to nurturing the enduring ties between the two countries and its people through the provision of United States support for strong civil society, reputable accountable institutions, transparency, and other tenets of good governance that would help lay a solid foundation for the 2023 presidential elections.

Despite recognizing ongoing efforts to address government corruption and other critical reforms in Liberia, Representative Meeks, in the Resolution, further admonished the Liberian government to increase its efforts in the fight against corruption and prioritize human rights issues, and implement critical economic reforms necessary to accelerate sustainable economic growth and human capital development.

Representative Meeks, in the Resolution, further admonished the Liberian government to increase its efforts in the fight against corruption and prioritize human rights issues, and implement critical economic reforms necessary to accelerate sustainable economic growth and human capital development

The Resolution, among other things, “calls on the Departments of State and the Treasury to continue to impose targeted sanctions and other measures against those responsible for undermining the rule of law as well as the faith and trust of the Liberian people through the conduct of corruption, gross violations of human rights, economic crimes and other acts that threaten the peace and security of Liberia…”

The Resolution calls on the U.S. Government to continue to work with the Liberian Government to advance the objectives of the Liberian Anti-Corruption Commission and other anti-corruption agencies and goals underpinning Liberia’s participation in the Summit for Democracies in December 2021.

During his participation in the Summit for Democracy 2021, President George Weah called on world leaders to strengthen democracy and protect the fight against corruption, and at the same time promote human rights.

The call for sanctions against corrupt officials of government and other disruptors of the country’s peace comes against the backdrop that the United States remains the largest and longest bilateral donor to Liberia, allocating more than US$3 billion in multiagency assistance since 2003 to support stabilization, economic recovery, development, and global health, including support for Liberia’s response to the 2014–2016 Ebola outbreak and the ongoing COVID–19 pandemic, during which the United States worked with partners to donate nearly 900,000 COVID–19 vaccine doses.

Liberia also remains a beneficiary of United States trade preferences through the African Growth and Opportunity Act and the 2007 Trade and Investment Framework Agreement, both of which affirm the importance of open and diversified trade and investment between the United States and Liberia.

Cllr. Sherman was accused by the U.S. Department of Treasury of offering bribes to judges to circumvent justice.

The U.S. Treasury said the senator has had an undisclosed conflict of interest with the judge who ultimately returned a not guilty verdict in July 2019 in his economic sabotage case involving Sable Mining as exposed by Global Witness. Sherman, according to the Treasury, routinely paid judges to decide cases in his favor, and he has allegedly facilitated payments to Liberian politicians to support the impeachment of Justice Kabina Jan’neh who has ruled against him.

In 2016, Sherman was indicted by the Liberian government, along with several other government officials, for their involvement in the US$950,000 bribery scheme while in 2019, the presiding judge acquitted all individuals accused of being involved in the bribery scheme.

In a statement, the Treasury Department stated that Cllr. Sherman’s acts of bribery demonstrated a larger pattern of behavior to exercise influence over the Liberian judiciary and the Ministry of Justice.

He is designated for being a foreign person who is a current or former government official responsible for or complicit in, or directly or indirectly engaged in, corruption, including the misappropriation of state assets, the expropriation of private assets for personal gain, corruption related to government contracts or the extraction of natural resources, or bribery.

In 2021, the influential former warlord and current Senator Prince Yormie Johnson was sanctioned by the U.S. Department of Treasury for alleged corruption.

The sanctions against Sen. Johnson was announced in Liberia in December 2021 to commemorate International Anti-Corruption Day, came under the Global Magnitsky Act, which authorizes the U.S. government to sanction those it sees as human rights offenders, freeze their assets and ban them from entering the U.S.

Mr. Johnson was responsible for the slaying in 1990 of President Samuel Doe, who had been captured by his forces during the country’s 14-year civil war. Mr. Johnson sipped beer as he watched his men torture and mutilate Doe who begged in vain for mercy in a widely circulated video.

“As a senator, Mr. Johnson has been involved in pay-for-play funding with government Ministries and organizations for personal enrichment,” the statement said.

“As part of the scheme, upon receiving funding from the government of Liberia, the involved government Ministries and organizations launder a portion of the funding for return to the involved participants.” The scheme involves millions of dollars, according to the embassy statement.

Mr. Johnson also receives an undeserved salary from the Liberian government as a salaried intelligence source yet he does not provide any form of intelligence reporting, alleged the U.S. statement.

He is being paid in order to maintain domestic stability, according to the statement.

Despite Mr. Johnson being the most mentioned name when it comes to Liberia’s gruesome civil war, there are other former warlords who the domestic and international media report little on despite their significant, horrible contribution to the death and destruction of the lives, peace, and properties of ordinary Liberians.

Most people cited in the TRC report deny claims that they committed atrocities; some defended their actions. Many have gotten involved in politics since the end of the civil wars.

Dan Morias who is listed in the TRC report for alleged abuses committed while he served as minister of internal affairs for the Taylor regime. He ran for senator and served for one term.

In 2012, Roland Duo, who was a general under Charles Taylor NPFL, was named coordinator for special projects in the office of the national security adviser

Another person recommended to be banned for public office was a former senator and now Liberia’s Ambassador to Belgium Isaac W. Nyenabo, II (LURD warlord) who was appointed in February 2015 as ambassador with accreditations to the European Union, Luxembourg, and the Netherlands. In his current position from Brussels, Mr. Nyenabo has praised the George Weah government in spite of the administration’s dismal domestic and international records.

With critical concern being expressed by US senators and Representatives on the current state of politics and rule of law in the country, Ambassador Nyanabo seems to hold a contrary view despite many indicators, ordinary Liberians, and international institutions in agreement, including the European Union.

In a recent interview, he stated that “the issue with Cummings is purely a matter of law” and that “all should allow the process to take its due course”. He explained that in a case where a private citizen alleges criminality on the part of another, the “Government is left with no option but to allow due process”.

Former member of the house of Representative Saah Richard Gbollie was a combatant in Taylor’s NPFL. He also served as deputy director of police in Taylor’s regime. During the transitional government, he served as assistant minister of justice. While in the legislature, he was the former chairman of the national security committee.

Kai Farley was a commander of the Movement for Democracy in Liberia (MODEL) rebel group. After the war, he was voted into the house of representatives. After his term in the legislature, Weah nominated him as superintendent for Grand Gedeh County. The TRC recommended Farley for prosecution.

Adolphus Dolo, who served as an army general during the presidency of former president Taylor, was elected in 2005 as senator for Nimba County but lost his seat during the 2014 elections.

George Dweh, who was a member of the Liberians United for Reconciliation and Democracy and MODEL warring factions, is a cousin of former President Doe. Following the Comprehensive Peace Accord in 2003, Dweh ascended to the post of Speaker of the National Transitional Legislative Assembly from 2003 to 2005. He ran for president in 2017 but only got 4,935 votes.