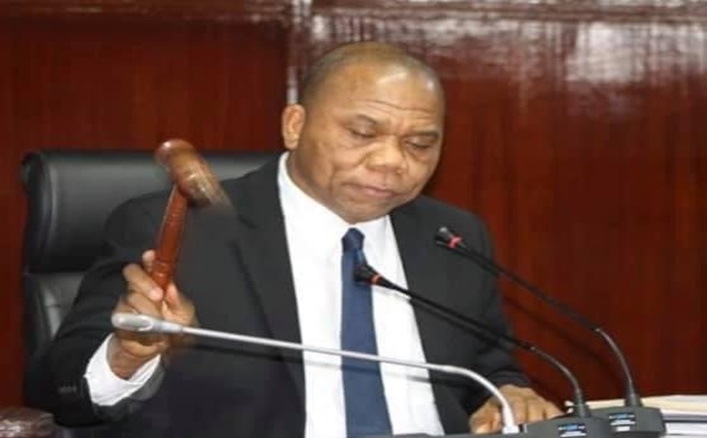 Introduction: The Liberian Senate adjourned sine dine on August 31, 2021, for the Fourth Session of the 54th Legislature. We have however cut short our annual break, returned to the Capitol, and will remain here for the next two months to deliberate on the 2022 National Budget which should come into force on January 1, 2022, and other issues of national concerns, such as the current security situation, as will be endorsed by Plenary. This is enshrined in Article 32(b) of the Liberian Constitution.

I thank you, fellow Senators, for the cooperation I received from you over the past year as we collectively took on our cardinal responsibilities in law-making, oversight, advocacy at the national and international levels, legislative engagements, and the implementation of variety of projects in our various constituencies. I thank you also for cutting your Annual Break short and return to the Capitol in the interest of your people. I wish to state, for the record, that this call is at the request of the Legislature and therefore the Treasury will not pay anything extra for the two months we will spend here.

The 2022 National Budget: Distinguished Colleagues: In line with the amended Public Financial Management Act, the new fiscal period will start from January 1 of each year and end on December 31 of the same year. Therefore as I stated earlier, the most cardinal purpose for which this Special Session is being convened is to work on the proposed 2022 National Budget which will be submitted to the Legislature by the President of Liberia shortly.

Let me hasten to add that Article 34 (d) of the Constitution empowers the Legislature “to make appropriations for the fiscal governance of the Republic”. I, therefore, challenge the Ways, Means, Finance, and Budget Committees of both chambers of the Legislature to take seize of the budget process. Although we should cooperate with the Ministry of Finance and Development Planning in the budget process, but we should always remember that appropriation is the responsibility of the Legislature and our people will hold us accountable for the performance of the budget and its implementation as we also have oversight responsibilities.

We have had several discussions in Plenary on the need for a program-based budget. It is time to implement this. For example, budget appropriations for roads should specify a particular segment of roads in the country and not blanket lump sum for roads. It is never late to make adjustments based on experience.

We recall that in the past Fourth Session, the Senate Plenary approved a proposal for Annual Budget Allotment for Infrastructure Development within the Political Subdivisions in Liberia. It is hard time that the decision be implemented starting with the 2022 National Budget.

With good indications coming from the fiscal managers of the economy that domestic revenue is performing, the Legislature needs to increase significantly the budgets of the security, health, and education sectors and consider significant appropriations for human trafficking, fight against sexual and gender-based violence, and other national priority programs such as the recent investment proposal from the University of Liberia.

Let me make a brief comment on the legislation we pass here.

Fellow-citizens, let me make it clear that this Liberian Senate does not approve or concur with laws and amendments to laws that are not in the public interest, most especially when it comes to the protection and distribution of natural resources.

In the now celebrated Act to establish the Land Rights Law of 2018, published on October 10, 2018, it was the Liberian Senate that introduced contemporary issues like the 5% undiluted free-carried interest in the rights of the concession for communities in which concessions are located.

There is a misinformation scheme being perpetrated by some former employees and managers of NOCAL and are now living in the diaspora, sometimes using innocent and good-intentioned Liberians, that one of the five principal amendments to the Petroleum Exploration and Production Law ( approved on October 9, 2019), : that is, Article 36, Citizens Participation in Revenue from Petroleum Agreements, is in not in the public interest. From our records, all the five provisions in the amendment approved by the Liberian Senate are very progressive and the added provision in Article 36 gives additional benefits to Liberians.

I urge the Committee on Judiciary which is reviewing the provisions in the amendment at the bequest of two of our Senate Colleagues, to expeditiously come out with its report so the matter can be laid to rest permanently.

DUAL CITIZENSHIP
There seems to be some level of confusion in the mind of some Liberians concerning the issue of Dual Citizenship; emanating from the letter of the Minister of Justice to the Minister of Foreign Affairs urging due notice in the implementation of the Revised Regulations to Govern the Administration and Issuance of Liberian Passports. The Justice Minister referenced the Opinion of the Supreme Court of Liberia sitting in its October 2019 term, against the automatic forfeiture of one’s Liberian citizenship without Due Process ( in the case: Alvin Teage Jalloh Petitioner vs Olubanke King Akerele et al).

For the records, let me state that a majority of Senators, including myself, support the concept of : “ once a Liberian, you will always be a Liberian”, in support of Article 27 (a) of the 1986 Constitution.

However, we are also of the opinion that the permanent way to lay the issue of Dual Citizenship to rest is thru a National Referendum to amend Article 28 of the Constitution. Unfortunately, this provision did not pass in the December 2020 Referendum. This provision of the constitution is regarded as prohibition against dual citizenship.

Therefore, the issue of Dual Citizenship in Liberia is yet to be resolved as far as we are concerned.

Going forward, the Liberian Senate will propose amendments to the 1973 Aliens and Nationality Law, especially to clarify the procedures for the loss of citizenship in line with the due process principle. Whatever amendments to the above law that may be proposed, it is clear that a National Referendum to amend Article 28 of the Constitution is the answer to the dual citizenship issue.
There is therefore a need to subject the Amendment of Article 28 of the Constitution to another round of national referendum.

SETTING THE AGENDA FOR THE SPECIAL SESSION
Distinguished Colleagues, besides discussion on the national budget and associated instruments such as financing and concession agreements, I would propose Plenary gives consideration to other national issues of grave concerns, including certain instruments in Committee Rooms: These include inter alia:

-Internal and external security issues;
-Primary and secondary roads rehabilitation;
-The various bills to enhance transparency and accountability in the public sector;
-Amendments to the New Elections Law of Liberia;
-Uncoordinated retirement of public school teachers, health workers, security personnel, and employees of the Ministry of Internal Affairs;
-Issues surrounding the Liberia Electricity Corporation and the power sector;
-Illicit mining throughout the country; and
-A Bill to provide budgetary appropriations to all cities within the Republic of Liberia;

During this Special Session, I encourage all Senators to work daily, especially on Mondays and Wednesdays which have been set aside for Committee Work, and clear all the instruments in Committee Rooms. The various Committee Rooms are flooded with legislative instruments which need to come to Plenary.

CONCLUSION
Let me conclude, Distinguished Colleagues, by thanking you once more for returning to the Capitol on this short notice to do the work of the Liberian People.