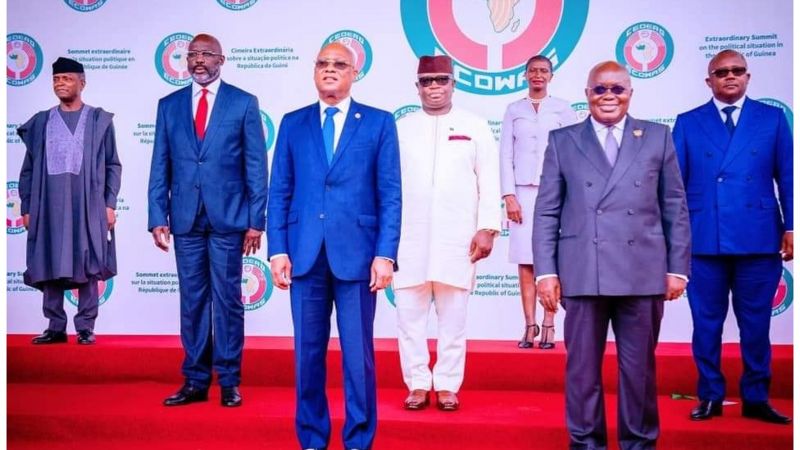 After many hours of review, ECOWAS Leaders on Thursday imposed sanctions against Guinea’s Military junta and actors slowing Mali’s transition. The new position of ECOWAS on Guinea and Mali is the strongest yet since the military takeovers in both countries. The position was resolved to respond in one voice to the military revolt in Conakry and slowing progress towards reinstating constitutional rule in Bamako and to send a signal to all groups that ECOWAS leadership and people prefer constitutional, democratic change rather than military.

ECOWAS leaders decided on sanctions that would freeze the financial assets and impose travel bans on Guinea’s junta members and their relatives while insisting on the immediate release of President Alpha Conde. The transition to constitutional rule is backed by the National Committee for Reconciliation and Development (CNRD), which has shown apparent commitment to work towards a swift return to constitutional order.

ECOWAS Commission President Jean-Claude Kassi Brou at a briefing said “In six months elections should be held,” in Guinea. ECOWAS also showed strength in Mali’s review demanding that the transitional government stick to the agreement to organize elections for February 2022 and present an electoral roadmap by next month, according to the post-summit communique.

In six months elections should be held,

Anyone in Mali hindering preparations for the elections faces the same sanctions as those imposed in Guinea, it said.
Leaders who took part in the summit hailed this more hardline stance. West and Central Africa has seen four coups since last year – political upheaval that has intensified concerns about a backslide towards military rule in a resource-rich but poverty-stricken region.

“I welcome the strong actions of the summit to safeguard democracy, peace, security, and stability in the subregion,” Senegalese President Macky Sall tweeted.

I welcome the strong actions of the summit to safeguard democracy, peace, security, and stability in the subregion

The President of Liberia, George M. Weah, on September 5, 2021, expressed deep concern about unfolding political development in Guinea and called on all sides in the ongoing political situation to refrain from violence, uphold the rule of law and ensure calm.

Coup leaders in Guinea are holding consultations this week with various public figures, groups, and business leaders in the country to map a framework for the transition.