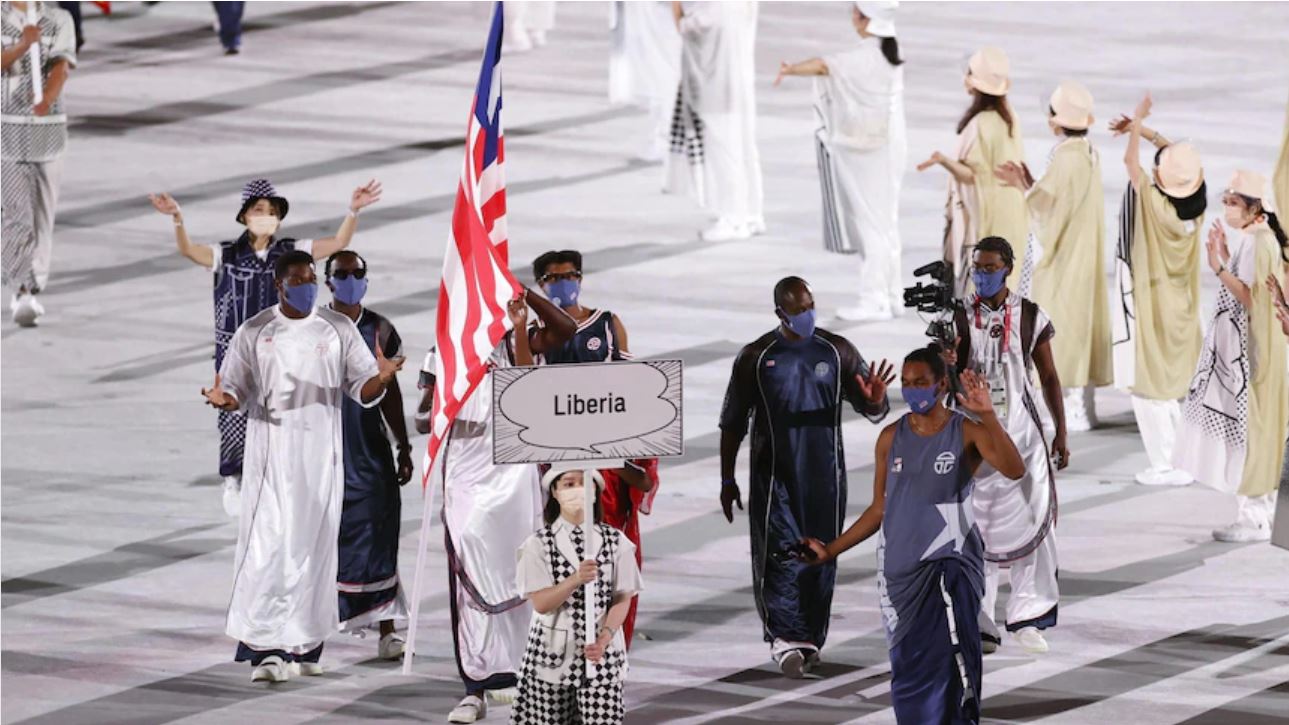 Three athletes will be at the track and field competition today, and while you may not recognize them, you will want to know more about them.

One of the smallest teams at the Tokyo Games is Liberia. They’ve been competing regularly since the Melbourne Olympics in 1956 with little support or fanfare.

This time around it is different.

A chance introduction of a friend of a friend suddenly saw Liberian-American handbag designer, Telfar Clemens, agree to outfit the team, making them one of the stars of the opening ceremony.

He’s thought of everything, including designer face masks. For the first time, they also have their own media reporting from the Games.

Janelle Addy is the co-founder of Go Team Liberia, a blog that became a website dedicated to Liberian Olympians after she could find no info on her brother’s athletic pursuits.

“In Beijing 2008, my brother was competing for Libera as a decathlete, and we could find no news on him… so we started our own website called Go Team Liberia.

“Our team has three athletes — one woman, Ebony Morrison our hurdler, and sprinters Emmanuel Matadi and Joseph Fahnbulleh.

“Emmanuel Matadi is our veteran, this is his second Olympics.”

“As far as sponsorship goes, this is actually our first year that we’ve had a very big sponsor.”

Addy says it was “like destiny” for Clemens to become involved with the athletic team for the Tokyo Games.

“He not only designed their opening ceremony uniform, but he also did the tracksuit, he did their sweats, everything that they could possibly need, Mr Clemens handled that for them.”

His involvement sparked a whole package of support, including a song being written for the team by a group of Liberian artists including Grammy award nominees.

Addy hopes the attention is positive, spurring the team on to success, rather than it feeling like a burden or pressure.

“You know every Olympic games athletes feel the pressure of having to come in and ‘go win the medal, go win the gold’.

“We have such a community of Liberians that have come together and started to lift these three athletes to win a medal.

Liberia’s best hope is 19-year-old Fahnbulleh, a champion in the American college system who has run a personal best of 19.91.

“He’s going to be growing, so success is going to be that they have bared the lone star [from the flag] and they’ve waved it high and they’re going to have a community of people that are rooting them on.”

Addy says the athletes are a new breed, too, one that is redefining what ‘perfect’ and ‘performance’ is all about. Take for example American gymnast Simone Biles, and the reclaiming of who she is and what she’s prepared to do or no do.

“For someone like Simone Biles it could be that she just turned up for her team and was helping them even if she withdrew, that could be her perfect performance,” she said.

“I think that seeing athletes speak up for themselves is something that is commendable and admirable.

“Especially in a world where we’ve gone through so much in the past year.

“For them [the athletes] to still travel, to still prepare, to get mentally strong for the biggest stage is something we have to pay attention to and give them the grace to be human.

Ebony Morrison will race the heats of the hurdles on Saturday, July 31.

Emmanuel Matadi will contest the 100m heats on Saturday, July 31 and the 200m heats on August 3.

Joseph Fahnbulleh will contest the 200m heats on Tuesday, August 3.