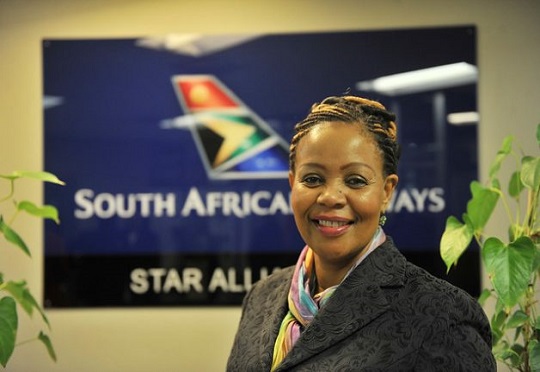 The Board of Directors at South African Airways (SAA) announced today that it has accepted the request from Zuks Ramasia, SAA Acting CEO, for early retirement.

“On behalf of the Board, I would like to thank Zuks for her leadership, passionate commitment and selfless contribution during her illustrious 27 years at SAA. Her journey was truly an example of how a number of women are progressively moving up the ranks in previously male-dominated industries.

We extend our sincerest gratitude to Zuks for her contribution at SAA and wish her success in her future endeavours,” said Thandeka Mgoduso, Acting Chairperson of the SAA Board.

Ramasia started as a cabin crew member in 1992, rose to the ranks of Senior Cabin Crew Member, then Safety and Emergency Procedures trainer, before taking up her first management position at Crew Movement in 2000.

She advocated for the aviation industry through her various international directorial roles at the Coordination Services Limited and International Air Transport Association Operations Committee.  She actively participated as aviation panellist speaker, owing to her vast proficiency and contributed in the fight against women discrimination and gender inequality in aviation.

Ramasia made an indelible mark on those she worked with at SAA, inspiring and mentoring several employees in their quest for aviation career advancement. She especially motivated women in their aviation careers and was unflinching in her commitment towards transformation of the industry. She amongst others, appointed Daicy Demas, as the first woman airport manager at SAA’s hub, OR Tambo International Airport, and Siyabonga Sithole as the first woman in the same role at King Shaka International Airport, in Durban.   She also appointed two other women as first women in managerial positions at GOCC.

In recognition of her contribution and influence as a leader, Ramasia was a finalist in the 2019 Standard Bank Top Women Awards.

The Board will make an announcement in due course on an interim successor during the Business Rescue process.