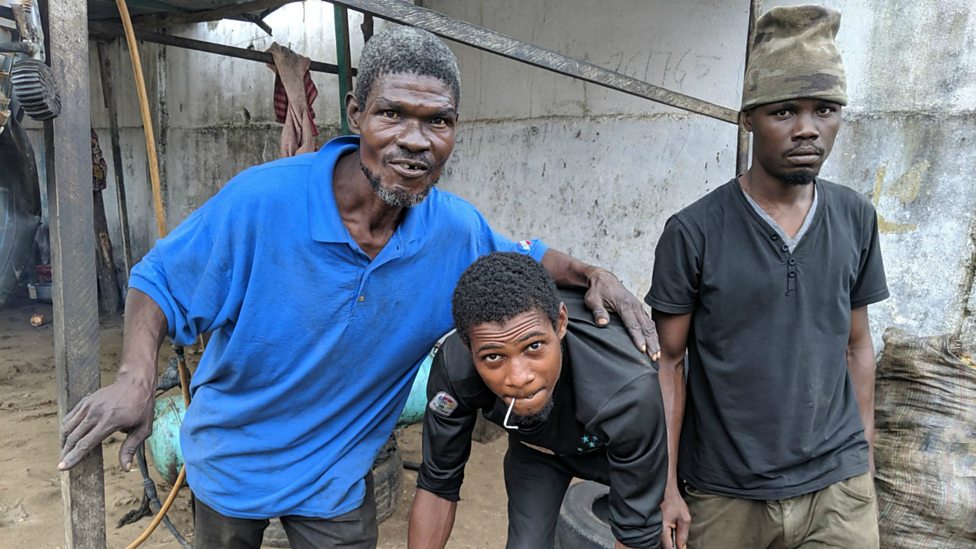 “Boulevard, Junction, Redlight!” Pacon calls out the names of stops as he directs likely passengers to share an empty taxi. When the taxi is full with passengers, the driver gives him 20 Liberian dollars (about 10 euro cents). For Pacon — real name Mohammed Saliba — what he earns per day is barely enough to eat and feed his drug addiction.

After his elder brother brought him on the streets at age 11 to sell snacks and fruit, Pacon got introduced to drugs and never left. At night, Pacon, who is now 27, sleeps in an abandoned building that he shares with other drug users and homeless youths.

In Liberia, Pacon and many like him are referred to as “zogos”, a derogatory term used to refer to disadvantaged people who eke out a scanty living on the streets. Most of them struggle with homelessness, violence, drug addiction and a lack of access to basic social amenities.

Although zogos can be of either gender, a 2019 survey by the Liberian government found that 91 percent of them are men. They have to navigate masculinity within a patriarchal Liberian society that puts men on the top rung of society while zogos are ranked among the lowest.

A United Nations study on gender norms and masculinities in Liberia found that many Liberians associate masculinity with taking on the role of breadwinner, physical strength, providing protection, making decisions, hiding emotions, and being hard and dominant.

For Pacon, being a man is tied to his ability to “live, hustle and make money”. However, he says that he doesn’t earn enough to fulfil this role.

“I am on the street hustling; I don’t have money so I depend on whatever people give me. I am suffering, so I smoke (marijuana and other drugs) to remove my mind from it.”

Zogos have to deal with discrimination and inhumane treatment, including police raids of the ghettos and dilapidated buildings where they live.

This is confirmed by another zogo known as Fifty, while his real name is Prince Barclay.

“Because I am living on the street, some people don’t see me as a man,” Fifty says. “Some treat me like I am not a human being, but because I need their help I take whatever they say. Sometimes tears come to my eyes because of the way I am living and the way some people treat me.”

Like Pacon, Fifty lives on the streets of the capital Monrovia, where he washes cars and begs to survive.

Neither Pacon nor Fifty is married and they no longer communicate with their families.

Stigma of being labelled ‘zogo’
For both, earning a living is made more difficult by the fact that zogos are stigmatised as criminals. While they accept that some do engage in petty theft, they insist that the stereotype is unfair.

“We are not all criminals; we just live on the street. When we see criminals we call the police,” says Fifty.

Being labelled as criminals also puts zogos such as Fifty and Pacon at risk of violent reprisals.

In 2019, a resident of Redlight — an area with a large market in Monrovia — died from stab wounds during an altercation with a zogo who tried to rob him.

Unable to identify the actual robber, Redlight dwellers retaliated by attacking zogos on the streets indiscriminately, killing four and destroying the shacks where they lived. No one was prosecuted for the murders.

The stigma of criminality is influenced by the incorrect perception that zogos are all former child soldiers, many of whom committed atrocities during Liberia’s 14-year civil war.

During the bloody conflict from 1989 to 2003, rebel fighters forcibly recruited thousands of children to serve as soldiers, many under 10 years old. They participated in monstrous acts of violence and became deeply traumatised.

The false generalization that all zogos are ex-combatants and criminals is widely repeated by the national media, fuelling violence against them.

While thousands of child soldiers and unaccompanied youth ended up on the streets after the Liberian civil war, many zogos including Pacon and Fifty do not have this background. However they all have to deal with the collective stigma.

“When we beg on the streets, some people would tell us to leave them because we are ex-combatants or rebels. But I just live on the streets, I did not fight any war, I am just trying to hustle and survive,” Pacon says.

Lack of mental healthcare
Both men say that despite the fact that they want to leave the street, they see no alternative.

While outreach workers occasionally approach them with offers of social services and rehabilitation, most never follow up on their promises, they complain, and there is little or no access to mental healthcare.

An official at Liberia’s Ministry of Youth and Sports told Euronews that it offers psychological counselling and practical help to young people who are living on the street and using marijuana. After a period of monitoring, suitable candidates are offered training in vocational skills.

While there is no specific programme aimed at zogos, The Carter Center, a human rights group founded by ex-US president Jimmy Carter, works extensively with the Liberian government to improve policy on mental healthcare and access to treatment.

Speaking to Euronews, Benedict Dossen, the head of the Center’s mental healthcare programme in Liberia said: “We don’t work directly with zogos. However, we train mental health clinicians. We also work with journalists as regards proper reporting for mental health issues.”

Most of the direct work with zogos is done by local NGOs, but this is limited by a lack of adequate funding and rehabilitation centres, making it hard to break the cycle of homelessness and drug addiction.

“I want to leave the street, but they would have to give me a place to sleep,” Fifty says.

“If they help me to leave the drugs, but they leave me sleeping on the street, I would go back to the drugs.”