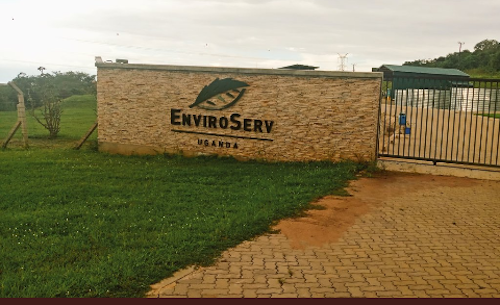 Waste management firm EnviroServ runs a disciplined operation in Nyamasonga village, Bugahya county in Hoima district. At the entrance gate, The G4S security guard reminds visitors to wash their hands and drive slowly once they enter.

Inside, men in blue overalls and reflector jackets with helmets make quick steps around the compound. Others drive around industrial trucks while the sound of a plant humming can be heard to give an allure of beehive-like activities.

Only that it is not the case. “It looks like a lot is going on but there isn’t,” quipped Peter Odil, the plant supervisor.

EnviroServ, a merger of South Africa’s EnviroServ and Uganda’s Green Albertine Limited, was set up to manage Uganda’s industrial waste, mainly from oil activities. By March 2015, the company says, it had finished construction and thus ready for work.

But there wasn’t too much waste to handle because oil activities had slowed down. Today only about 30 per cent of the company’s plant is currently being used. Officials told us: “We are being underutilized. We are not utilized.”

The only waste at the plant is what was generated earlier during the exploration stage – from Total E&P, Tullow, and China National Offshore Oil Company (Cnooc) activities. This exploration stage ended around 2012. With EnviroServ operating below capacity and running short of funds, it has had to make painful decisions.

Albert Kyaligonza, the EnviroServ Safety Health Environment and Quality manager, said the company has cut its staff to just 14 from 33 in Hoima. Community programmes have also been cut because of the lack of money to sustain them.

“We’ve been ready since 2015 around March. That is when we finished construction of the first phase. The delay [in oil activities] has not put us in a good position. We have had to lose our people. That is a very big problem,” Kyaligonza said.

Yet EnviroServ is but a portrait of the many companies that invested early in anticipation of the first oil. But all seems not well with extended delays and uncertainty that shrouds the industry.

When Uganda discovered commercial oil reserves in 2006, the government urged Ugandans to prepare to supply the sector, with technocrats estimating that the country would kick off production as early as 2009. The country has failed to beat every target since then.

With the target for the first production becoming more uncertain, companies have scaled back on activities, laid off staff, and made some of their assets redundant, among other painful decisions.

Oil companies too – Tullow Oil, Total E&P, and China National Offshore Oil Company – have not been spared. In Hoima town, the hitherto fizzy office of Cnooc is shut, symbolic of the uncertainty that has hit the sector.

Tullow has laid off some staff, with one of those retrenched anonymously telling us; “I never thought this could happen.”

Total has cut foreign staff at its Kampala office from 20 to 10, according to a knowledgeable person. The local staff could also be cut too, we have been told. The company has also suspended its initial procurement activities for the crude oil pipeline to Tanzania.

Dennis Kakembo, a lawyer and managing partner of Cristal Advocates, says the impact of the slowdown has been both at a personal and business levels. He left a lucrative job at global audit firm Deloitte to start a law firm focused on oil and gas.

From 2017, Kakembo and his colleagues took on prime space, hired staff and readied themselves for the industry to take off. It was not to be, he said.

“In 2018, it was particularly hard for us,” he added. “I was lured to come back to Uganda towards the end of 2017. I stepped out of Deloitte because I thought I had gotten sufficient exposure to stand on my own and we started Cristal Advocates…we borrowed some money to enable us take off. We didn’t see the Final Investment Decision (an agreement needed to unlock capital for the oil industry). Life was very difficult for us to keep afloat,” said Kakembo.

As government told Ugandans to prepare for up to $20 billion to be spent in the market when the activities in the oil sector begin, shrewd Ugandans reasoned housing and hotels would be on demand. Many reached out to banks for credit. The banks obliged. Yet, many people who borrowed paid the price of seeing their businesses foreclosed.

“This was speculation,” said Judy Rugasira, the managing director of estate agent Knight Frank Uganda. “We have seen more and more empty spaces available on the market.”

Indeed, the Knight Frank reporting showed that in 2018 when the hopes for reaching the Final Investment Decision (FID), which technically means oil players are confident to release money and start actual investments, faded, many upscale apartments fell vacant as many idle expatriates went back home.

Yet if there is one industry whose appetite to cash in on the oil and gas industry ended in tears, it is the logistics sector. Some players entered into partnerships with global companies and bought assets like trucks, ridge carriers and other assets. Many of these assets are either rusting away or have been sold at less than half the price they acquired them at.

Initially, during the exploration stage, many cashed in, according to different players. A single truck would be paid up to $1,000 per trip. Things were looking up and many invested before everything came crumbling, according to Hussein Kiddede, the chairman of the Uganda Freight Forwarders Association.

He told URN that “it has been a painful journey.”

“There has been hope since 2014. The industry is capital-intensive and in preparation of that, people stretched [by borrowing] and it has not yielded. This has affected the entire [logistics] industry,” said Kiddede.

For some, when the sector slowed, they took their trucks to South Sudan, Kiddede said. However, this was short-lived as in 2016, the fighting between rebels and the government broke out again. They hauled their assets back to Uganda, where they have been parked ever since or sold off. For many, the assets have been redundant as bankers came after the owners.

Kiddede said an asset of $150,000 is being sold at $40,000. Eng. Patrick Bantumbya, the director of MBW Consulting Ltd, said while consultants as himself were not as hurt as those that bought physical assets, they have been forced to lay off workers and roll back on capacities they were developing for the sector.

The government of Uganda acknowledges the delay has been painful for many companies. Bank of Uganda advises companies to renegotiate their terms with their bankers.

Bank of Uganda executive director for Research Adam Mugume said they are aware of the pain oil and gas suppliers are going through. He advised suppliers to renegotiate terms of their loans since even when there is the uncertainty, the oil will eventually come out of the ground.

“Unfortunately that is the bad news… some of the businesses that borrowed are in trouble. But if they can renegotiate their borrowing terms, that is better. For now, we agree they have problems.”

Kiddede, however, said it was not practical that suppliers can renegotiate bank loans. He said politicians and public officials were making political statements but impossible to implement, arguing that banks can’t wait for ten years to get their money back.

For the government and some suppliers, the delay has come with costs but some opportunities too. On the cost, for instance, the workers laid off by different organizations means there was tax foregone on the workers’ income. Cristal Advocates has, for instance, calculated that layoffs and foregone tax in corporation earnings could have cost the government up to $300 million in taxes annually.

On the good side, the government argues that it was able to enact necessary laws for the industry, renegotiate some agreements and develop capacities to take on complex things, including tax disputes.

Joe Oloka Onyango, a law academic at Makerere University, wrote recently that the legal regime in Uganda appears to be determined to avoid the debt trap associated with oil-producing states in Africa.  He says that regulation placed in different government agencies means it will be hard for one agency to mismanage the resource.

Hoteliers in Hoima say the delay has helped them ready themselves. Richard Ojiambo, the manager of Kontic hotel in Hoima, said they have managed to construct more rooms and a conference centre in preparation for the sector. He said oil and gas activities have become important in that they constitute at least 30 per cent of the hotel’s revenues.

At Glory Summit hotel, the owners said while the visitors – mostly workers of oil companies’ and contractors – have slowed down over the years, with 2019 seeing the biggest drop, they are more prepared to handle big orders.

It is uncertain when key projects can finally kick off. And for EnviroServ, every month that production is delayed is a cost on them. Even with no work, it has to buy reagents, update certifications, and fly in expatriates to make sure machines remain functional.