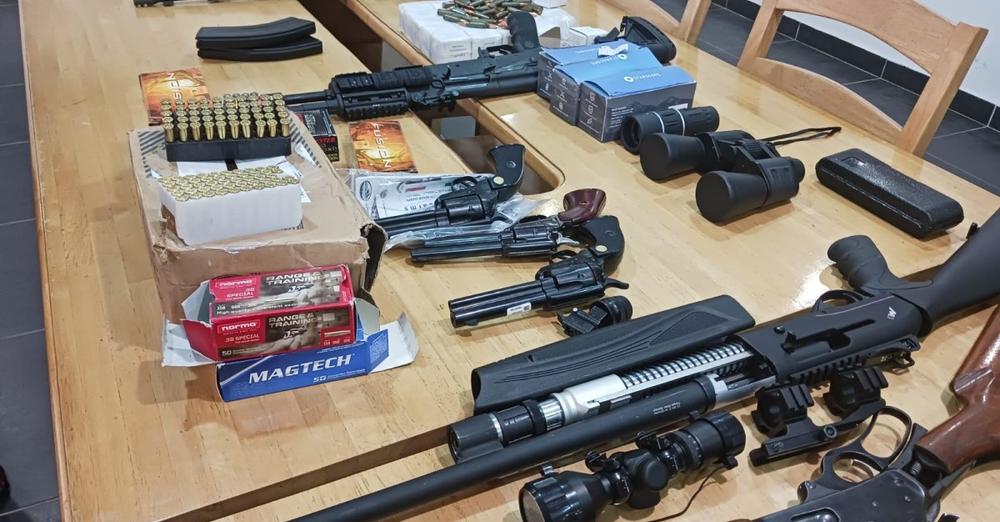 Monrovia – The Liberia National Police (LNP) said in a major press conference that through their intelligence sources, they are vigorously investigating the unpatriotic motive behind the illegal importation of weapons of war (AR-15, AK-47) and ammunition in the country.

Speaking to a full room of international and local reporters,  the Inspector General of Police, Col. Patrick Sudue said that the weapons were discovered after they were offloaded and Custom cleared in the Freeport of Monrovia. Col Sudue went o to inform reporters that the weapons of war were found in several caches loaded onto a container by what he called suspicious individuals.

The Inspector General of Police, through a joint security operations, managed to legally confiscate the container which is believed to be allegedly shipped by a Liberian residing in Texas, USA. The owner of the container is identified as Mr. Boye Benjamin Baker. Based on public information, Mr. Baker works for American Airlines (company has no link to the allegation).

“We had the intelligence so we went to the Freeport and confiscated the container, opened the container – the first few boxes that were searched, we saw some heavy weapons, a lot of them, we’re talking about military weapons. As we speak the container is sealed up, we’re going to search the entire container,” he said.

Col. Sudue disclosed that at least 15 assorted riffles have been discovered so far. “But those 15 weapons if you get them you can destabilize this country because those are high-ferocity-powered firing weapons. We’re talking about weapons that use 20-caliber rounds, 30-caliber rounds – those are not joking weapons,” Col Sudue said. Several ammunitions were also discovered.

The Inspector General disclosed that some of the ammunition discovered did not match the weapons they have confiscated. He said, they had to halt the inspection of the container for national security reasons but would continue the inspection today, Friday, January 6, 2023.

He also disclosed that the investigation will now focus on the unpatriotic motive behind the importation of the weapons of war.

We need to know who are those behind the importation of those weapons and who were those going to use the weapons.

The arms and ammunition were uncovered following the issuance of a search and seizure warrant in connection with a classified leak of information from an unidentified source. Three individuals have so far been remanded into high security custody in connection with the high profile case that is now gripping the attention of all Liberians ahead of the 2023 national elections.

According to the LNP, Mrs. Barbra Debba of the Old Road community who was to allegedly receive the consignment is among those arrested. The broker identified as Ms. Melvina has also been arrested. During the search of the alleged consignee’s home (Mr. Boye Baker) in Brewersville, more weapons were discovered in the attic. Also found hiding in the attic is a male individual identified as Mr. Tamba who is also in police custody.

While the LNP have beef-up scrutiny due to national security concerns as to how Weapons of war and ammunition have being smuggled into the country, with fear of consequences it may have on the pending elections if tough security measure is not put into place, the LNP has announced a major inspection of vehicle across the country to avoid security threats.

As part of security parole, LNP said it will remove unauthorized security features from vehicles across the country.

Thursday security seizure uncovered over ten document-preserved boxes loaded with the stock of the rifles discovered according to security sources mounted with long-range lance glasses including M203 launcher gadgets, American-made M16, and AK47, among others.

The Weapons of War and ammunition discovered in the Freeport on Monrovia near the capital is enough to set off a high intensity, quick impact, street-to-street warfare on ordinary citizens before the National Police and the Armed Forces of Liberia can adequately respond.

In recent times, Liberians have seen their “fear gauge” dramatically increase as a result of threats made by former warlord politicians to their Liberty, Peace, security and stability.

Ordinary Liberians are now left with many unanswered questions for the government of President George Weah. Are they safe, in their own country?

Are their children and Love ones safe in the country? Why is the government weak on National Security? Can they trust the government of President Weah to provide peace and security in the upcoming 2023 General Elections and are former Warlords who have become politicians, using their financial resources to intimidate the ordinary people of Liberia ahead of 2023 elections?

In a newly published report, Human Right Watch stated that at various times, President Weah has said that those responsible for civil wars-era crimes should face justice, but in recent years, he has gone silent or been dismissive about establishing a court.

Prince Johnson, a former warlord implicated in civil wars-era crimes in Liberia, who is now a senator and is subject to US Treasury Department sanctions due to his alleged role in corruption in Liberia, has led much of the opposition to the creation of a court.

According to reports, Isaac W. Nyenabo, another former warlord implicated in civil wars-era crimes in Liberia who is now an Ambassador for Liberia to the European Union under the Weah led Government also opposes the creation of a Court.

Notorious figures implicated in civil wars-era crimes who have lived in the US but have returned to Liberia face no imminent threat of being held accountable, the groups said. George Boley, a former warlord who was deported from the US due to his alleged role in recruiting child soldiers in Liberia, now serves in Liberia’s House of Representatives. Moses Thomas fled to Liberia while being sued in the US for his role in one of the single worst incidents during Liberia’s wars, the 1990 Lutheran Church massacre, during which more than 600 people were estimated killed. The court held him responsible and ordered him to pay survivors US$84 million in damages, which he has yet to do.

President Weah should request international and regional expertise to determine the best legal and structural requirements for a war crimes court that could operate fairly and effectively in Liberia, the groups said. Such efforts can build off existing proposals for a court, including one made by Liberia’s Truth and Reconciliation Commission in 2009 that would be composed of international and Liberian judges, prosecutors and other staff and another made by Liberia’s National Bar Association.