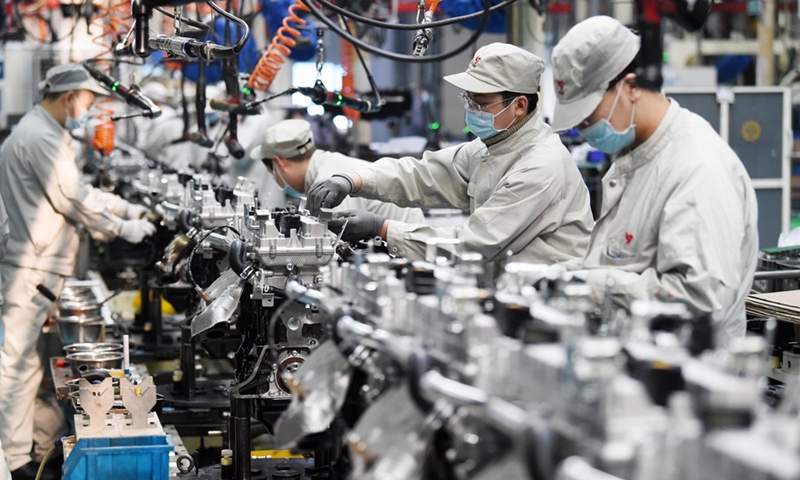 The global economy is facing risks and opportunities next year from rising interest rates to China’s reopening.

As the worst of COVID-19’s effects on public health receded, the war in Ukraine and China’s tough “zero COVID” curbs injected new chaos into global supply chains. Food and energy prices soared as inflation in many economies hit four-decade highs.

After a tumultuous year, the global economy heads into 2023 in choppy waters.

On the positive side of the ledger, China’s reopening after three years of strict pandemic curbs offers a confidence boost for the global recovery — albeit tempered by fears that the rampant spread of the virus among the country’s 1.4 billion people could give rise to more lethal variants.

Inflation and interest rates
Inflation is expected to decline globally in 2023 but nonetheless remain painfully high.

The International Monetary Fund (IMF) has predicted global inflation will hit 6.5 percent next year, down from 8.8 percent in 2022. Developing economies are expected to have less relief, with inflation projected to only ease to 8.1 percent in 2023.

“It’s likely that inflation will remain stubbornly higher than the 2 percent that most Western central banks have set as their benchmark,” Alexander Tziamalis, a senior economics lecturer at Sheffield Hallam University, told Al Jazeera.

“Energy and raw materials will remain expensive for some time. The partial reversal of globalisation means more expensive imports, shortages of labour in many Western countries leads to more expensive production, and green transition measures to combat the greatest threat our species faces are all leading to higher inflation than we’ve been used to through the 2010s.”

Slowing growth and recession
While price growth is expected to ease in 2023, economic growth is certain to slow sharply alongside rising interest rates, too.

Many economists are more pessimistic and believe a global recession is likely in 2023, barely three years after the downturn caused by the pandemic.

In a column last month, Zanny Minton Beddoes, editor-in-chief of The Economist, painted a grim picture that was summed up by the article’s unequivocal title: “Why a global recession is inevitable in 2023”.

Even if the global economy does not technically fall into recession — broadly defined as two consecutive quarters of negative growth — the IMF’s chief economist recently warned that 2023 may still feel like one for many people due to the combination of slowing growth, high prices and rising interest rates.

“The three largest economies, the US, China and the euro area, will continue to stall,” Pierre-Olivier Gourinchas said in October. “In short, the worst is yet to come, and for many people, 2023 will feel like a recession.”

With draconian restrictions inside the country a thing of the past, China’s international borders are set to reopen from January 8.

The reopening of the world’s second-largest economy — which has slowed dramatically during the last year — should inject new momentum into the global recovery.

A rebound in Chinese consumer demand would give a boost to major exporters such as Indonesia, Malaysia, Thailand and Singapore, while the end of restrictions offers relief to global brands from Apple to Tesla that suffered repeated disruptions under “zero COVID”.

While Beijing has stopped publishing COVID statistics, hospitals across China have been flooded with the sick, while morgues and crematoriums have reported being overwhelmed with the influx of bodies.

Some medical experts have estimated that China could see up to 2 million deaths in the coming months.

With the virus spreading rapidly among China’s colossal population, some health experts have also expressed concerns about the emergence of new and more dangerous variants.

“Barring this very disruptive opening up, I think that the market will do great,” Alicia Garcia-Herrero, chief economist for Asia Pacific at Natixis, told reporters.

“The other thing to watch is if there’s a major mutation, and mutations can be either less lethal but they could also be more lethal, and I think if the latter happens, and we start seeing closures of borders again, that would be traumatic for investor confidence.”

Bankruptcies
Despite the economic devastation wrought by COVID-19 and lockdowns, bankruptcies in fact declined in many countries in 2020 and 2021 due to a combination of out-of-court arrangements with creditors and large government stimulus.

That trend is expected to reverse in 2023 amid rising energy prices and interest rates.

Allianz Trade has estimated that bankruptcies globally will rise more than 10 percent in 2022 and 19 percent in 2023, eclipsing pre-pandemic levels.

“The COVID pandemic forced many businesses to take on substantial loans, worsening a situation of increasing dependence on cheap loans to make up for the loss of Western competitiveness due to globalisation,” Tziamalis said.

“The survival of highly indebted businesses is now called into question as they face a perfect storm of higher interest rates, higher energy prices, more expensive raw materials and less consumption spending by consumers … It is also worth pointing out that the appetite of Western governments for any direct help to the private sector has been curbed by their increased deficits and prioritisation of support for households.”

Fraying globalisation
Efforts to roll back globalisation accelerated this year and look set to continue apace in 2023.

Since its launch under the Trump administration, the US-China trade and tech war has deepened under US President Joe Biden.

In August, Biden signed the CHIPS and Science Act blocking the export of advanced chips and manufacturing equipment to China — a move aimed at stifling the development of the Chinese semiconductor industry and bolstering self-sufficiency in chip making.

The passage of the law was just the latest example of a growing trend away from free trade and economic liberalization towards protectionism and greater self-sufficiency, especially in critical industries linked to national security.

In a speech earlier this month, Morris Chang, the founder of Taiwan Semiconductor Manufacturing Company (TSMC), the world’s biggest chip manufacturer, lamented that globalization and free trade are “almost dead”.

“The West, and particularly the US, are increasingly threatened by China’s economic trajectory and respond with economic and military pressure against the emerging superpower,” Tziamalis said.

“An outright war over Taiwan is highly unlikely but more expensive imports and slower growth for all countries involved in this trade war are a near certainty.”