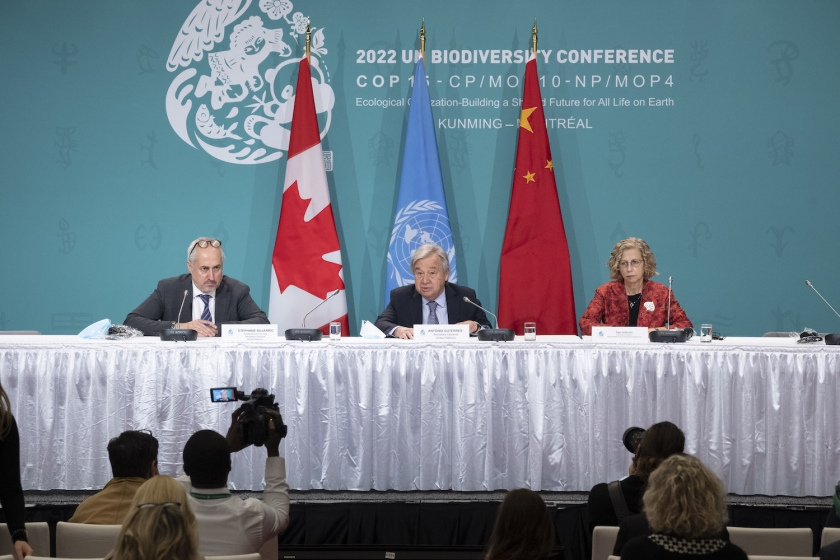 The agreement at Cop15 in Montreal contains a commitment to protect 30% of land and water considered important for biodiversity by 2030.

Negotiators have reached a historic deal at a UN biodiversity conference that would represent the most significant effort yet to protect the world’s lands and oceans and provide critical financing to save biodiversity in the developing world.

The global framework agreement comes a day before the United Nations Biodiversity Conference (Cop15) is set to end in Montreal.

China, which holds the presidency at this conference, released a new draft earlier in the day that gave some momentum to the sometimes contentious talks.

The most significant part of the agreement is a commitment to protect 30% of land and water considered important for biodiversity by 2030.

Brian O’Donnell, the director of the conservation group Campaign for Nature, told reporters: “There has never been a conservation goal globally at this scale.

“This puts us within a chance of safeguarding biodiversity from collapse. We’re now within the range that scientists think can make a marked difference in biodiversity.”

As part of the financing package, the framework calls for increasing to at least 20 billion dollars (£16.4 billion) annually by 2025 the money that goes to poor countries – or about double what is currently provided. That number would increase to 30 billion dollars (£24.7 billion) each year by 2030.

Some advocates wanted tougher language around subsidies that make food and fuel so cheap in many parts of the world. The document only calls for identifying subsidies by 2025 that can be reformed or phased out and working to reduce them by 2030. Andrew Deutz, director of global policy, institutions and conservation finance for The Nature Conservancy, said: “The new text is a mixed bag.

“It contains some strong signals on finance and biodiversity but it fails to advance beyond the targets of 10 years ago in terms of addressing drivers of biodiversity loss in productive sectors like agriculture, fisheries, and infrastructure and thus still risks being fully transformational.”

The ministers and government officials from about 190 countries have mostly agreed that protecting biodiversity has to be a priority, with many comparing those efforts to climate talks that wrapped up last month in Egypt. Climate change coupled with habitat loss, pollution and development have hammered the world’s biodiversity, with one estimate in 2019 warning that a million plant and animal species face extinction within decades — a rate of loss 1,000 times greater than expected.

Humans use about 50,000 wild species routinely, and one out of five people among the world’s population of eight billion depend on those species for food and income, the report said.

But they have struggled for nearly two weeks to agree on what that protection looks like and who will pay for it.

The financing has been among the most contentions issues, with delegates from 70 African, South American and Asian countries walking out of negotiations on Wednesday.

Brazil, speaking for developing countries during the week, said in a statement that a new funding mechanism dedicated to biodiversity should be established and that developed countries provide 100 billion dollars (£82 billion) annually in financial grants to emerging economies until 2030.