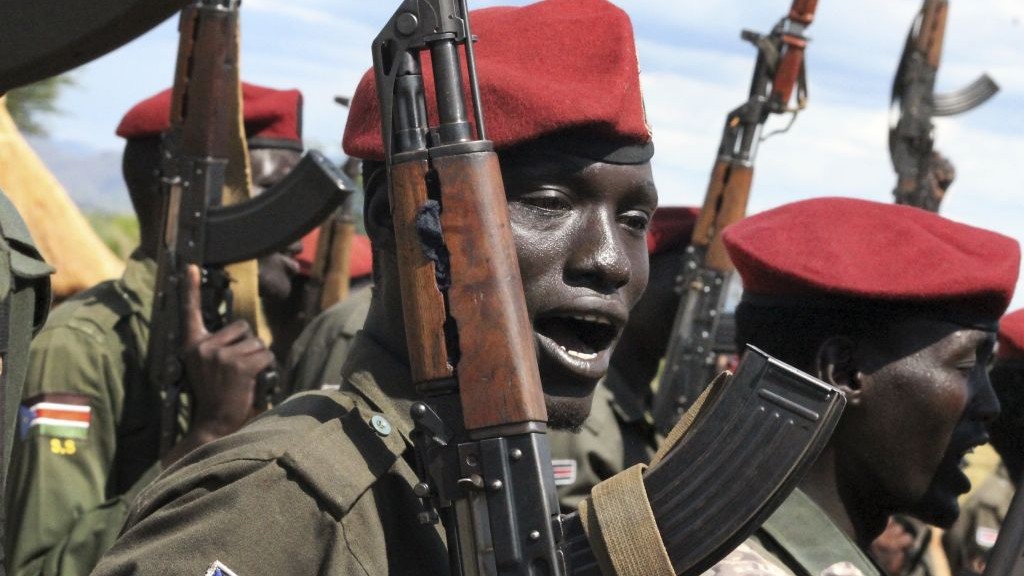 The U.S. counterterrorism strategy in Africa isn’t working, and it hasn’t for decades. It’s time for a new approach.

The U.S. counterterrorism strategy in Africa isn’t working, and it hasn’t for decades. The United States and the international community have poured billions of dollars into fighting terrorism on the continent, with bleak results: Extremist violence in Africa has increased by 300 percent in the past decade, and violent events have doubled since 2019. If that weren’t bad enough, the increase in violence has hurt efforts to address the climate crisis, food insecurity, education needs, and poverty.

As the White House convenes the first U.S.-Africa Leaders Summit since 2014 and implements its recently unveiled U.S.-Africa strategy, there’s no better time to rethink Washington’s failed counterterrorism approach on the continent and replace it with a plan that addresses the underlying problem and focuses on investing in good governance.

When I worked in the U.S. State Department’s Bureau of Conflict and Stabilization Operations, I compiled empirical research on the factors contributing to violent extremism and found that security forces’ abuses and human rights violations are some of the biggest drivers of violent extremism. And yet, the international community, including the United States, has trained, equipped, and partnered with forces across Africa that have committed human rights violations while conducting counterterrorism operations. The irony is that not only do these partnerships reflect poorly on America’s character and harm U.S. credibility on the continent, but they also fuel the very violent extremism that Washington is aiming to counter.

Poor governance—as well as the alienation and bitterness it fosters—is a major enabler of violent extremism in Africa and around the world. Where citizens are marginalized, government services are limited, and corruption is rampant, extremism can easily take root. But too often, counterterrorism strategies support military forces that attack their own citizens and further exacerbate grievances that led to extremist violence to begin with. As others have argued, it’s this very “state predation” and the insecurity it engenders that allow “violent extremist groups to engage with ‘desperate citizens’—and thrive,” in the words of former State Department Senior Conflict Advisor Marc Sommers.

This is exactly what we’ve seen across the African continent in the last decade. In Mali, Burkina Faso, and Niger, when security forces have killed civilians, there has been little to no justice for the victims’ families. I saw this firsthand when I worked on Nigeria policy at the State Department in 2015. The Nigerian military’s abuses fueled the Boko Haram insurgency’s recruitment, yet the United States partnered with the military anyway in the name of counterterrorism. Just this year, despite no observable improvements in the Nigerian government’s respect for human rights, the United States approved a nearly $1 billion weapons sale to the Nigerian military.

In Somalia, the U.S. strategy continues to be military focused despite little evidence that it’s turning the tide against the al-Shabab insurgency and in the face of a record of civilian casualties from U.S. airstrikes, joint military operations, and the Somali military that fuels al-Shabab propaganda. And the United States continues to provide security assistance to the Cameroonian military despite its egregious human rights abuses.

In all of these countries, violence has only increased since the start of U.S. counterterrorism support.

In the face of these failures, it’s clear it’s time for a new strategy—one that focuses on good governance, not guns. A landmark 2017 study from the U.N. Development Programme found that addressing conflict and decreasing the risks and instances of violent extremism and terrorism require focusing on and investing in governance.

Delivering good governance means building trust between the state and marginalized communities, prioritizing state accountability, addressing corruption, and ensuring justice in the security sector. When citizens feel like the deck isn’t stacked against them and that everyone has an equal shot at opportunity and is treated equally under the law, they’re less likely to view the government negatively and turn to violent extremism in an effort to change the status quo.

Good governance is more than a technical exercise that can be fixed with programming—it’s inherently political. Reforms that seek to foster an independent judiciary, expand access to justice, make government transparent, counter corruption, and improve civil service weaken elite control and are thus often met with stiff resistance from the ruling class. As such, U.S. engagement with governments can’t just prioritize counterterrorism and ignore everything else. The United States needs to prioritize improvements to governance, using diplomacy and incentives to move the needle, and make sure U.S. actions—and dollars—convey that this is the priority.

This isn’t to say that the United States shouldn’t invest in security assistance. A fundamental part of good governance is a legitimate and accountable security force. But a functional military is more than one that can shoot straight—it’s one that provides effective security to both the state and the people and respects the rule of law and human rights. No one should be surprised that there’s a strong relationship between violence and illegitimate security institutions—which means Washington needs to provide security cooperation more strategically to incentivize governments to make needed reforms in the governance of the security sector rather than just improve tactical proficiency.

The United States can take a big step toward new and sustained investments in governance through thoughtful implementation of the Global Fragility Act, which became U.S. law in 2019. While it’s in the early stages of implementation, the Global Fragility Act “directs the President to devise and implement a plan to combat global fragility” over 10 years and establishes funding for such efforts. The law aims to reform how the United States addresses conflict and to ensure that resources flow from strategy—not the reverse. It recognizes many of the lessons learned from decades of failed military interventions and responses to conflict by rebalancing investment away from the military and toward diplomacy, addressing underlying grievances, and applying a conflict-sensitive approach to security assistance. In coastal West Africa and Mozambique, for example, the United States has the chance to steer away from the overmilitarized approach taken in the Sahel and instead focus policy efforts on addressing governance challenges, with local communities taking the lead.

Washington also needs to think strategically about how to react to increased Chinese investment and recent Russian paramilitary operations in Africa. Both certainly pose challenges to U.S. long-term goals, but trying to match them one for one on the continent is a reactive waste of resources. How and where to engage around the world should make strategic sense for U.S. interests. Not every Chinese or Russian investment in Africa warrants an immediate U.S. response. While some of China’s Belt and Road projects have been positive for host communities and underline the need for U.S. investment, many have been wasteful for the host nations and often have failed to advance Chinese interests at a sustainable price.

The United States’ real power comes from its ability to build international coalitions that further its goals. The key to that leverage is maintaining America’s reputation as a defender of democracy and human rights, which is one of the United States’ major comparative advantages over China. Empowering abusive governments undermines that credibility and harms U.S. national security because it weakens Washington’s ability to maintain partnerships and creates blowback.

African populations in some countries are already seeing the negative consequences that come from partnering with Russia’s Wagner Group: In addition to committing major human rights violations across the continent, the Wagner Group has failed to stabilize the conflicts in Mozambique and Mali.

Washington shouldn’t assume that any pause in U.S. weapons sales to African countries will automatically result in Russia or China filling the vacuum or that those two countries can provide an effective alternative to U.S. partnership. Leaders tell me time and time again that they prefer U.S. weapons and the larger U.S. commitment on things like training and maintenance that come with buying those weapons. Rather than shying away from imposing preconditions on recipient countries, the United States should use them as leverage to push for its priorities.

Washington’s inclination to match China and Russia on the continent no matter what is eerily reminiscent of the United States’ Cold War era mistakes—propping up authoritarian regimes in exchange for fleeting geostrategic alignment. Although Washington forged the military partnerships it wanted, when the autocrats were gone, the United States was left without a partner and with a local population deeply suspicious of larger U.S. ambitions. From Chad and Angola to Zaire (now the Democratic Republic of the Congo), U.S. efforts to counter the Soviet Union and its proxies led to increased violence, enabled dictators, and left a stubborn legacy of meddling and interference on the continent. A 2018 Rand Corp. study found that U.S. security assistance in Africa during the Cold War increased civil wars and insurgencies because Washington partnered with corrupt and authoritarian governments as long as they were not allies of the Soviet Union.

In the long run, these types of overtures fueled instability and fomented resentment against the United States and the regimes it supported, and they often undermined the very geostrategic objectives Washington was trying to achieve. Few look back fondly on U.S. President Ronald Reagan’s open embrace of apartheid South Africa, and the years of U.S. support for Mobutu Sese Seko in Zaire not only enabled one of the world’s most corrupt regimes but also helped lay the groundwork for decades of conflict that the United States is still trying to address.

Just as Washington’s Cold War mistakes are remembered by today’s populations in Africa, current U.S. policy on the continent will have long-lasting consequences. Most Africans are under 30 years old and are disillusioned with their governments. The worst thing the United States could do is be the chief ally, arms dealer, and enabler of corrupt and abusive regimes that are in power now but won’t be forever. Why risk ruining relationships with young Africans, civil society organizations, and democracy advocates that will become more powerful in the years ahead?

Following the current path will continue this painful cycle of poor governance and subsequent mistrust, hostility, and violence. It will hurt U.S. national security and create further harm to Africans. I’ve seen this pattern up close and on the ground myself. It’s long overdue to change course and take advantage of this moment—at the first U.S.-Africa Leaders Summit in nearly a decade—to change the trajectory of America’s legacy and relationship with African nations by investing in good governance. If the United States says that strong, thriving, and vibrant democratic governance is its driving mission, then it should stand by it—in Africa and around the world.