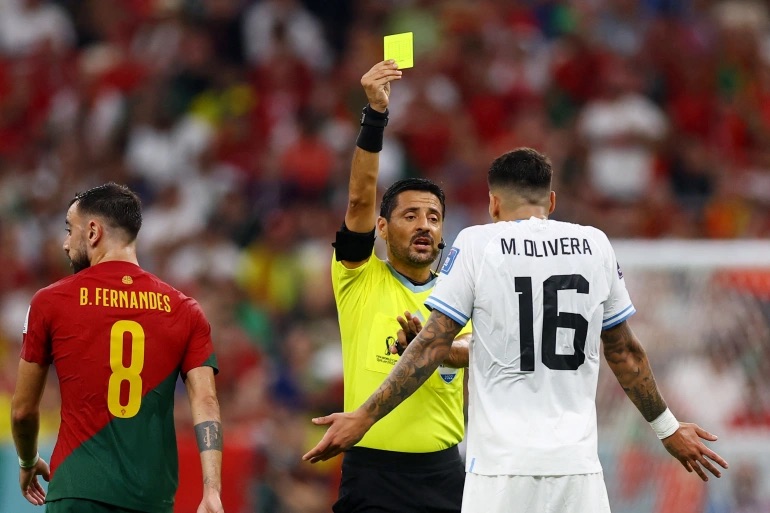 Day nine of the World Cup in Qatar has witnessed some of the most dramatic matches so far, with Cameroon making a stunning comeback in a battle with Serbia where six goals were scored and still neither side emerged victorious, the teams having to settle for a 3-3 draw.

A heartbroken South Korean team left the pitch on Tuesday — with some players in tears — after their 3-2 defeat to Ghana in a game where the Koreans threw everything at the Ghanaian’s goal in the second half but could not break through their defences.

The frustration felt by the team on the pitch spilled onto the sidelines, where the South Korean manager received a red card after a final-whistle tirade against the referee.

Brazil beat Switzerland 1-0 in a match win that guarantees the Brazilians a place in the knockout stages of the football World Cup in Qatar. The win at Stadium 974 means Brazil, already five-time world champions, have now qualified comfortably for the Round of 16 and with a game against Cameroon still to play in their group stage of the tournament.

Portugal’s 2-0 victory over Uruguay also puts them through to the last 16 of the World Cup with a group game to spare.

Here is a quick guide recapping all you need to know from day nine — Monday, November 28 — of the Qatar World Cup 2022.

Cameroon vs Serbia
In a match described as the most exciting game of the World Cup in Qatar so far, six goals were scored when Cameroon and Serbia faced off on Monday. That excitement surged when Cameroon staged an impressive comeback to finish with a 3-3 draw against Serbia in a game that saw Cameroon replace their goalkeeper Andre Onana at the very last minute.

Cameroon’s Coach Rigobert Song said he dropped his starting goalkeeper for “disciplinary reasons”, but did not give further details and replaced Onana with Devis Epassy, who was making just his sixth international appearance.

The inauspicious start did not detract from what would be a thrilling game and a surprise six-goal draw.

Cameroon took the lead in the first half through central defender Jean-Charles Castelletto’s 29th-minute tap-in but then conceded two goals to the Serbians in quick succession.

Serbia’s Strahinja Pavlovic’s was the first, heading in a free kick to level the score before Sergej Milinkovic-Savic struck from 20 metres (66 feet) just two minutes later. Serbian striker Aleksandar Mitrovic made it 3-1 at the start of the second half after Serbia opened Cameroon’s defense with a series of quick passes.

Cameroon was down 3-1, but second-half substitute Vincent Aboubakar turned the dramatic game with a goal and an assist. He lobbed Serbia goalkeeper Vanja Milinkovic-Savic in the 64th minute to score his 34th goal for the Indomitable Lions, and he then set up striker Eric Maxim Choupo-Moting two minutes later for the 3-3 equalizer.

“The lion roared today,” Aboubakar said after the match. “I dedicate this result to the squad, and to the people of Cameroon.”

But the result suits neither side. Both sides lost their opening games, with Serbia beaten 2-0 by Brazil and Cameroon losing 1-0 to Switzerland.

Cameroon and Serbia each have one point after two Group G matches, two points behind Switzerland after the Swiss lost 1-0 to Brazil later on Monday. That win by Brazil — the record five-time World Cup champions — sent them into the Round of 16 and still with a match to spare.

Switzerland now needs a win in their last match against Serbia to be guaranteed a spot in the next stage. A draw may be enough, but that will depend on the outcome of the match between Brazil and Cameroon on Friday. Serbia will also likely need a win if they hope to advance.

“We were not smart enough to finish the match to our own advantage,” Serbia coach Dragan Stojkovic said later.

Brazil vs Switzerland
Five-time World Cup champions Brazil overcame the absence of their injured star player Neymar to beat Switzerland 1-0 with a late goal on Monday and, in doing so, made it to the tournament’s Round of 16 with a match to spare in Group G.

Casemiro got the only goal in the 83rd minute of a game in which Brazil had difficulties creating scoring chances without its main striker Neymar. Casemiro, a defensive midfielder, scored with a shot into the far corner of the Swiss side’s goal, using the outside of his right foot for a shot that deflected slightly off defender Manuel Akanji.

It was an even match early on in the game, with both teams trying to control the ball but not creating many significant chances. Without Neymar, Brazil struggled to get near Switzerland’s goal until Casemiro took his shot. The assists came from Vinicius Junior and Rodrygo, the Real Madrid players who until recently had Casemiro as their teammate. Casemiro now plays for Manchester United.

Vinicius Junior had thought he had given Brazil the lead with a shot from inside the penalty area after a pass by Casemiro in the 64th, but a video review determined there was offside in the build-up. Few had noticed it until the VAR call was announced at Stadium 974.

“Of course we miss a player like Neymar,” Tite said after the match. “The team loses a lot without him. But we also have other players who can get the job done, as we saw it today,” he said.

Switzerland coach Murat Yakin said his team have done a “good job for quite some time”.

“I don’t think it’s a disappointment. We have a lot of good takeaways here. The next game is something we have control over,” he said.

Switzerland, which had no attempts on goal during the match, now needs a win in their last game against Serbia to be guaranteed a spot in the Round of 16. A draw may be enough depending on the match between Brazil and Cameroon on Friday.

Portugal vs Uruguay
Two goals from Portugal’s Bruno Fernandes sent his team through to the last 16 of the World Cup on Monday after a 2-0 win over a lacklustre Uruguay.

Fernandes scored with a cross intended for Cristiano Ronaldo that sailed fortuitously into the net in the 54th minute. He then converted a penalty in stoppage time to put his side into the group of 16 knockout stage with a match remaining.

Portugal had the lion’s share of the possession and dominated for most of the match, but struggled to create clear-cut chances until the second half in a game where Uruguay looked sluggish and off form.

Ronaldo set the tone for the match with some early showboating when he used a shoulder to redirect a long throw into the path of William Carvalho, whose powerful volley sailed over the bar.

Portugal looked threatening but struggled to create goal-scoring chances in the first half.

And it was Uruguay who had the best shot in the 32nd minute of the first half when Rodrigo Bentancur picked up the ball and ran half the length of the field, skipping around three defenders before firing off a low shot that was blocked by the advancing Portugal keeper Diogo Costa.

Bentancur was at the centre of the action again a few minutes later when his outstretched leg met a cross from the left from Mathias Olivera, trickling through to Darwin Nunez, who failed to convert from close range.

Portugal finally broke the deadlock when Fernandes’s cross floated past Uruguayan goalkeeper Sergio Rochet, who was rooted to the spot as Cristiano Ronaldo rose to head the ball and initially celebrated the goal as his.

A grinning Ronaldo threw his arms in the air, suggesting he got the final touch, and was embracing Fernandes as multiple close-up replays were being shown on the big screens in Lusail Stadium.

Alas for Ronaldo, the goal wound up being awarded to Fernandes, who added a second from the penalty spot in stoppage time after a handball by Uruguay’s Jose Maria Gimenez.

Uruguay had a brief rally to try to get back into the match after a raft of substitutions, with Facundo Pellistri making an instant impact, Luis Suarez coming close, and Maxi Gomez hitting the post.

But the match belonged to Portugal and Fernandes, who coolly converted a penalty in stoppage time after a handball in the box that required a VAR review.

Hungry for more, Fernandes almost scored a hat-trick deep into stoppage time, with his effort saved at the near post by Rochet and a strike in the dying moments that cannoned off the post.

Portugal are now the third team to reach the last 16 after France and Brazil.

Uruguay has one point from two matches and needs to beat Ghana on Friday to stand a chance of advancing. Even a draw against South Korea in their final Group H match on Friday will secure first place for Portugal. For Uruguay, it will be a must-win game against Ghana.

“We’ll need to gamble more. We need to be a bold team,” the Uruguay coach, Diego Alonso, said after the match on Monday.

South Korea vs Ghana
Ghana survived a furious late siege of their goal to revive their World Cup chances in a dramatic match on Monday against South Korea, where the African side secured a 3-2 victory that was greeted with as much relief as celebration.

Ghana’s Mohammed Salisu scored the opener in a roller-coaster match at the Education City Stadium, and teammate Mohammed Kudus headed home another as Ghana took a 2-0 halftime lead, only for South Korea to come fighting back with two goals in three minutes from Cho Gue-sung.

Cho’s goals were both powerful headers as the Ghanaian defence was overrun, first in the 58th minute and, with the Korean supporters behind the Ghana goal already in delirium, a second following just three minutes later.

South Korea then made changes at halftime that put them right back in the match, even if talisman Son Heung-min, again playing with a black face mask to protect his facial fractures, proved surprisingly ineffectual.

Beginning the second half, the South Koreans fought back in spectacular style, but one second-half error ultimately proved costly when Ghana snatched back the lead as Kudus delivered the winning goal.

A goal ahead, Ghana then sat back and were besieged for about half an hour, with Lawrence Ati-Zigi making several good saves and his defenders putting their bodies on the line as they blocked efforts from all angles from the South Koreans.

Ten minutes of stoppage time added to the game only served to heighten the drama, culminating in a contrast of emotions at the final whistle as an exhausted Ghana celebrated and the Koreans were left in tears.

Son Heung-min was visibly upset at the final whistle and with South Korea’s World Cup hopes hanging by a thread.

South Korea’s manager Paulo Bento was red-carded as his frustrations boiled over at the final whistle in a verbal tirade at English referee Anthony Taylor.

Bento was furious South Korea were denied a corner when Taylor ended the game after the allocated 10 minutes of stoppage time.

“The result is totally unfair, even a draw would be unfair. We deserved a win,” South Korea’s assistant coach, Sergio Costa, said after the match.

Ghana coach Otto Addo said after the match that the Black Stars would seal their entry into the group of 16 by beating Uruguay when they meet on Friday in their final group H match.