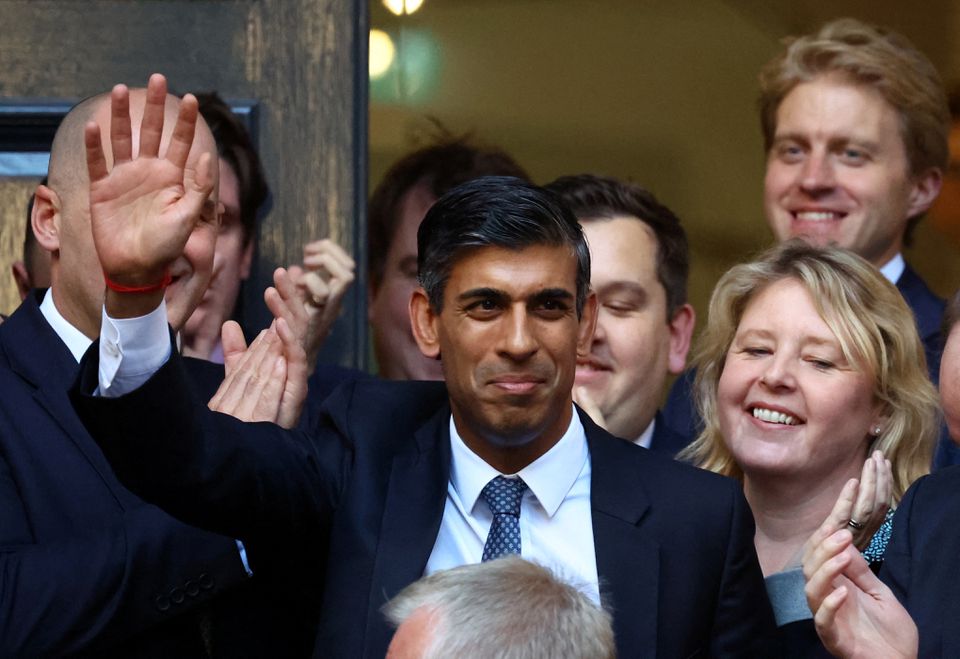 LONDON, Rishi Sunak will become Britain’s youngest prime minister in modern times after he won the race to lead the Conservative Party, tasked with steering a deeply divided country through an economic downturn set to leave millions of people poorer.
He replaces Liz Truss, who only lasted 44 days before she resigned, needing to restore stability to a country reeling from years of political and economic turmoil, and seeking to lead a party that has fractured along ideological lines.

He told his lawmakers in parliament on Monday that they faced an “existential crisis” and must “unite or die”. He told the country it faced a “profound economic challenge”.
One of the wealthiest politicians in Westminster, Sunak, 42, will become the country’s first leader of colour – and its third prime minister in less than two months – as he takes over during one of the most turbulent eras in British political history.

“We now need stability and unity, and I will make it my utmost priority to bring our party and our country together,” he said.

The multi-millionaire former hedge fund boss will be expected to launch deep spending cuts to try to rebuild Britain’s fiscal reputation, just as the country slides into one of the toughest downturns in decades, hit by the surging cost of energy and food.

A recent mini budget by Truss, which triggered her downfall, pushed up borrowing costs and mortgage rates, and sent investors fleeing. British government bonds rallied aggressively in the run-up to Sunak’s victory, and extended their gains on Monday.

Sunak, likely to be appointed prime minister by King Charles on Tuesday or Wednesday, will also have to work hard to hold Britain’s dominant political party together after some accused him of treachery earlier this year when he resigned from the cabinet of former leader Boris Johnson, triggering his downfall too.

Other Conservatives say he is too rich to understand the day-to-day economic pressures building in Britain, and worry whether he could ever win an election for a party that has been in power for 12 years.

“I think this decision sinks us as a party for the next election,” one Conservative lawmaker told Reuters on condition of anonymity.

PERMA-CRISIS
Britain has been locked in a state of perma-crisis ever since it voted in 2016 to leave the European Union, unleashing a battle at Westminster over the future of the country that remains unresolved to this day.

Johnson, the face of the Brexit vote, led his party to a landslide victory in 2019, only to be driven out of office less than three years later after a series of scandals. His successor Truss lasted just over six weeks before she too was forced out.

Historian and political biographer Anthony Seldon told Reuters that Sunak had the most difficult economic and political inheritance of any British leader since World War Two, and would be constrained by the mistakes made by his predecessor Truss.

There is no leeway on him being anything other than extraordinarily conservative and cautious,” he said.

He added that Sunak had shown composure when he became finance minister just as the COVID-19 pandemic hit Britain.

Amid the turmoil, polls show that Britons want an election. The Conservatives do not have to hold one until January 2025.

Angela Rayner, deputy leader of the opposition Labour Party, said the Conservatives had “crowned Rishi Sunak as prime minister without him saying a single word about how he would run the country and without anyone having the chance to vote.”

Labour has held record leads in opinion polls of more than 25 points ever since Truss’s budget sent shockwaves through financial markets.

Economists and investors welcomed Sunak’s appointment, but questioned whether he can tackle the country’s finances while holding the party’s warring factions together.

Many Conservative lawmakers appeared relieved that the party had at least selected a new leader quickly.

Penny Mordaunt, who lost out to Sunak, said his election was an “historic one and shows, once again, the diversity and talent of our party,” she said. “Rishi has my full support.”

Veteran lawmaker Crispin Blunt told Reuters after Sunak met lawmakers in a room in parliament: “The party will remain united, not least because we don’t have a choice. In there, he showed a capacity to marshal the whole party.”

INDIAN ORIGIN
The first real test of unity will come on Oct. 31, when finance minister Jeremy Hunt – the fourth person in the role in four months – is due to present a budget to plug a black hole in the public finances that is expected to have ballooned to up to 40 billion pounds.

The task will be helped by a recovery in the bond market, with the 30-year gilt , which suffered unprecedented losses after the mini-budget on Sept. 23, now recovered to levels seen that day before the announcement.

Sunak’s appointment is another first for Britain – he will become the country’s first prime minister of Indian origin.

His family migrated to Britain in the 1960s, a period when many people from Britain’s former colonies moved to the country to help it rebuild after World War Two.