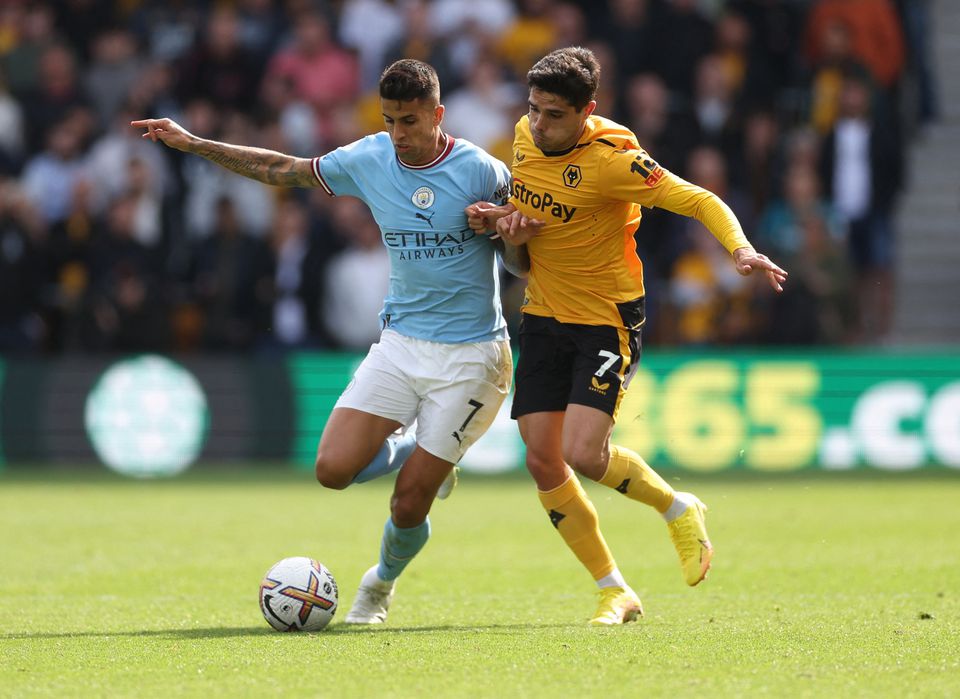 Jack Grealish scored inside the first minute and Erling Haaland netted his 11th Premier League goal of the season as Manchester City eased to a 3-0 victory over 10-man Wolverhampton Wanderers at Molineux on Saturday.

Phil Foden added a third in the second half as City moved to the top of the table with 17 points from seven games, while Wolves are in 16th place having won only once this season.

The home side were reduced to 10 men on 33 minutes after a horrendous challenge from defender Nathan Collins, who launched himself studs-first into the midriff of Grealish and could have no complaints about the straight red card.

There was a minute’s silence ahead of kickoff following the death of Queen Elizabeth and the majority of fans kept a respectful silence, while there was warm applause on 70 minutes from all around the ground to mark the number of years the monarch was on the throne.

The opening goal after 55 seconds was a first of the season for Grealish, who has come under criticism this week for his failure to both score and provide assists since his 100 million pound ($114 million) move from Aston Villa last year.

“It was nice to get off the mark this season and get the three points at a difficult place to come against a top team,” Grealish told BT Sport.

“This Wolves team is so underrated and they showed that in the second half, so it is a great result for us.

“I should be scoring goals and getting more assists. I’m always going to have people talking about me with the amount I was bought for.

“But even at Aston Villa I did not score as much as I should have. It is something I want to add to my game.”

The champions took the lead when Kevin De Bruyne’s inviting cross into the six-yard box was turned home by Grealish, before Haaland scored his 14th goal in all competitions with a scuffed shot from the edge of the box after Wolves defender Max Kilman stood off him.

The Norwegian striker became the first player in Premier League history to net in his first four away games, and the points were sealed when De Bruyne was again the architect with another low cross into the six-yard box which was turned home by Foden.

The win sees City unbeaten in their last 22 away Premier League games, a club record, and was achieved despite a lethargic second-half display in which they were not at their sizzling best.