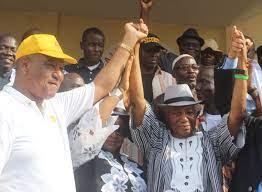 When the surprising news came down from the Treasury Department in Washington that three officials in Liberia’s current government would be added to the sanctions list, for once, Liberia’s opposition looked united in their response – they were all gleeful and giddy with excitement!

Alexander Cummings, the leader of the Alternative National Congress and the presumptive standard bearer of the Collaborating Political Parties, issued numerous statements denouncing the sanctioned individuals as “rogues,” then going forward to promise that if he were ever to be elected president, he would never tolerate misconduct or associate himself with anyone under current or former sanctions.

“Justice must not and will not discriminate,” Cummings said in his statement, which in no way will ever backfire upon him in the future. “ It must and will be served equally and blindly to the big and small as well as to the haves and have-not, alike.”

Nyonblee Karnga-Lawrence, who describes herself as the leader of the Liberty Party though that claim is disputed, joined the chorus with Cummings, saying that she “welcomed” Washington’s decision and further stated that she hopes the names of individuals who transacted with those officials will become public.

Former Vice President Joseph Boakai probably went the furthest with his reactions, convening a press conference at the Unity Party headquarters to denounce the immorality of associating with sanctioned people, demanding that they immediately be sacked.

“These sanctions are the latest in an unending list of evidence pointing to how a group of individuals in the government hold the country in a stranglehold and created for Liberia a reputation that undermines its standing in the international community,” Boakai said. “The threat and the potential consequences of these sanctions go beyond the corridors of power in Washington D.C; it reverberates in the capitals of countries in the sub-region and the world, and undercut the investment climate to woe serious people to do business in the country.”

Well, yes indeed Mr. Former Vice President, and it does seem in fact that President Weah agrees with you as it was announced on September 12th that the three officials had resigned and had been removed from the administration, and likely there will be further investigations into the vague and unsubstantiated claims brought forward by the US government.

But isn’t is also true that what’s good for the goose is good for the gander? Do we still uphold the very basic, very minimum standard that one should practice what they preach – especially if they intend to run for public office?

For if we are demanding that President Weah permanently disassociate himself from those sanctioned – and that seems to a uniform consensus loudly heard among the opposition – then WHY is it therefor “ok” for Joe Boakai to continue to nurture a close personal and financial relationship with the formerly sanctioned accused war criminal Benoni Urey?

The so-called “Urey Problem” has become a major headache and embarrassment for Boakai, growing larger each day as the next election approaches and he begins considering options for the vice president slot on his ticket as well as potential cabinet members. The toxic stain of partnering with an alleged war criminal and taking his dirty money has driven away Boakai’s support base in hordes – so much so that his party cannot even win seats in his Lofa stronghold.

The facts and the case against Urey are much much worse than the rumors brought against the three officials this summer – and even more concerning, they are proven. Benoni Urey, when he served as Maritime Commissioner under his political godfather Charles Taylor, was found by the United Nations to have diverted funds to purchase all variety of arms from the notorious Russian weapons dealer Viktor Bout – weapons which were used to murder thousands of Liberians in the second Civil War.

The fact that Urey managed to get himself “de-listed” from the sanctions in 2015 after investing hundreds of thousands of dollars into shady lobbyists in Washington does not erase his crimes – if anything there are very credible rumors he may be making his way back onto the list.

But does associating with such a disreputable alleged criminal and “rogue” as Benoni Urey trouble Joe Boakai?  Not even a little bit?

It’s not as though Boakai can claim that he’s unaware of what’s going on here. In a much discussed interview with the magazine Africa Briefing, he was asked the direct question: “Would you continue to support the war crimes tribunal if charges were hypothetically filed against your own political allies, such as Benoni Urey?”

Boakai’s answer did not inspire confidence.

“I will not sit here to judge anybody because I don’t know what each person did and to what extent. That’s why I believe if I knew that someone did something wrong and they know that whatever happens they know the public is aware, they should take the initiative to correct that wrong.  I recall Benoni Urey to be very frank, I don’t know to what extent,” Boakai said, indicating that maybe, if he had to, he’d let his friend be prosecuted.

But that seems like a very forgiving tone, doesn’t it? Maybe right now Joe Boakai is at his desk, writing letters on his nice former VP stationary to the recently sanctioned officials, letting them know that he does not judge them.

Until Boakai can man up and publicly force Benoni Urey to “resign” from active politics and promise no further association, than any claim he has about the George Weah administration is just simply not to be taken seriously.