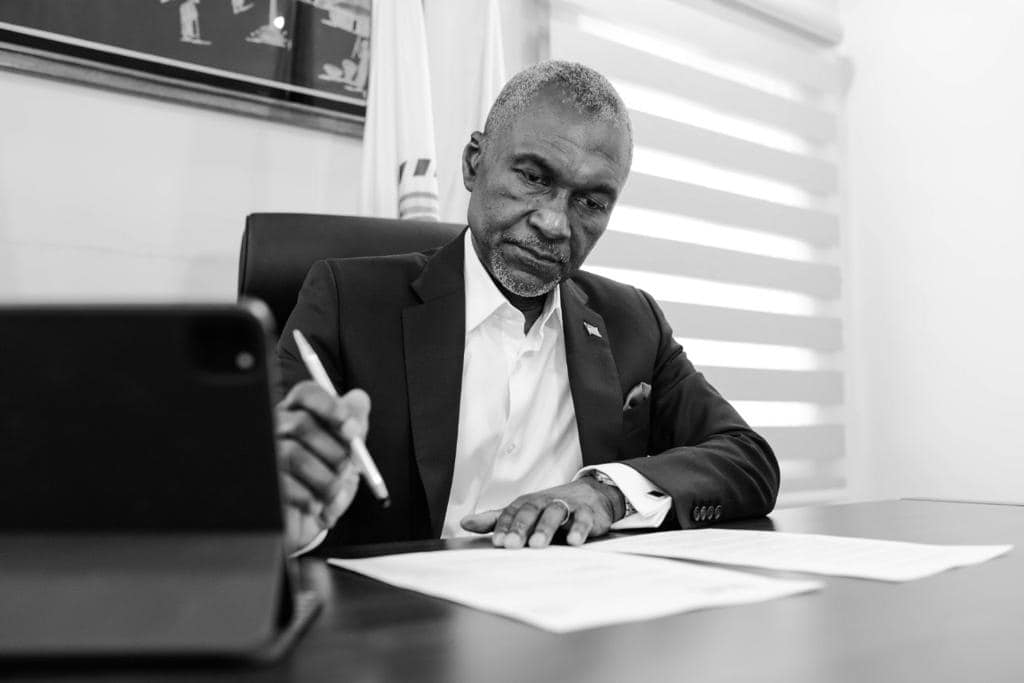 Mr. President:
I present my compliments and I feel compelled to draw your attention to three matters of urgent national concern. Firstly, last week, the United States Government announced sanctions on three senior officials of your administration including the Minister of State and Chief of Office Staff, the Solicitor General and the Managing Director of the National Port Authority. The designation of these close and powerful members of your inner circle for acts of stealing and abuse of their offices is of serious embarrassment to the presidency and our country.

Your response, Mr. President, is not commensurate with the magnitude and gravity of this international scandal and national shame. Mere suspension of these officials is tantamount to thumping your nose at the United States and our most important development partner. Those involved are your close confidants and partisans. Your lack of decisive action could raise suspicion of your personal involvements in these activities and receipt of benefits from the thievery and abuse. It has serious implications for yourself and smears the image of our country.

No serious investor would consider Liberia as a destination for investment to ease the hardship on Liberians through job creation and employment for our people, if your reaction continues to be weak, indecisive and not equal to the seriousness of the allegations.
Therefore, Mr. President, I again urge you to dismiss the designated individuals and request the Government of the United States to provide your administration with the information needed, if you do not possess them already, to immediately pursue their prosecution.

Mr. President, let me assure you that this is not a national concern over which the Liberian opposition intends to be divided, distracted, and therefore, dismissive. We stand together and will not stand aside on this grave matter over which the welfare and wellbeing of Liberians hang in the balance. We will continue to demand you respond as you should on this important matter in the best interest of the Liberian people. Enough is enough – there must be consequences for dereliction of duty and commission of crimes in our country.

The second matter, Mr. President, is that at your recent campaign rally in Montserrado County, Representative Solomon George, a CDC partisan, asked you to appoint him Police Director so that he can use that office to cause the “disappearance” of Liberians known to be in opposition to your administration. This was a dangerous, reckless, hate-filled, and incendiary statement. It should have been immediately and publicly condemned by you. That you applauded it was most disappointing and troubling.

I should remind you of your oath as President to protect lives and properties as well as preserve our hard-won democracy. We have already seen many suspicious deaths and mysterious murders under your leadership of our country. We have heard threats of bloodletting by the head of your party’s youth league and Mayor of the City of Monrovia. We have seen the violent reactions, including by organs of your party, to peaceful protests by Liberians, and recently to students of the University of Liberia, one of whom is still struggling for his life.

Mr. President, every Liberian life is precious. Our peace and democracy were earned on the sacrifices – voluntarily and involuntarily – of Liberian and other lives. We will not compromise our peace and democracy nor accept to be silenced in the protection and exercise of that for which many paid the ultimate price so that all Liberians can have, enjoy, protect, and preserve for generations to come.

The final matter, Mr. President, is the recent decision of the Liberian Senate to remove and replace all electoral magistrates who are trained and experienced. This decision is not recommended by the National Elections Commission, and is unsupported by any reasoning that advances our nation’s need for increased fairness and improved credibility in our electoral processes.

Even worse, it positions the Senate, if not the entire Legislature, to meddle into the employment of election magistrates, which is the duty of the NEC. This therefore leaves the unfortunate impression that it is unhelpful, if not even hurtful to the conduct of free, fair and credible elections in 2023, a process that is pivotal to the consolidation of peace, security and democracy in our country.

I therefore urge you to veto this decision of the Liberian Senate should such unhelpful decision reach your desk. This will be the right thing to do for Liberia, for the Liberian people, and for our cherished peace, democracy and security.
Sincerely,
Alexander B. Cummings