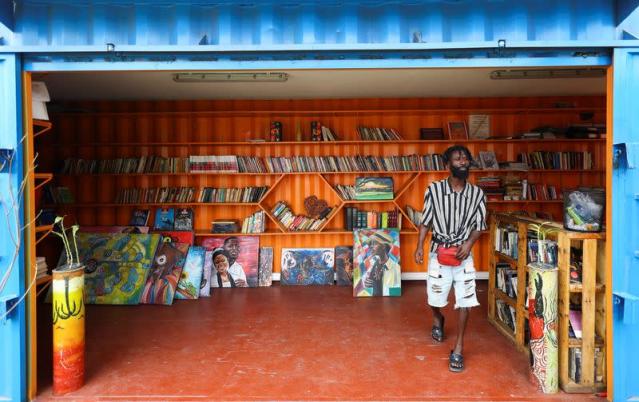 LUANDA-Two years ago, Francisco Mapanda and Arante Kivuvu were jobless during the COVID-19 pandemic so they started selling whiskey and cigarettes under a bridge in Angola’s capital, Luanda.

To ease the boredom, they read books, and when they realized others also wanted to read, they got more — until their hawking spot in the suburbs of Luanda turned into a makeshift library of nearly 4,000 titles.

Now, as Angola approaches its closest and tensest election since multi-party democracy arrived in 1992, the “library” has also become a spot where young Angolans debate their country’s future — and lament its many failures.

Mapanda, 33, stood before a big blue container full of books, bemoaning that so few young people had prospects.

“This space is an alternative to fill a void,” he said.

“A lot of people are unemployed. We, young people, need jobs so we don’t end up (just) wandering around,” he said.

Despite nearly five decades in power and billions of dollars worth of oil pumped, the MPLA-led government has failed to lift Angola’s overwhelmingly young populace out of poverty – under-25s make up 60% of the population, and more than half are unemployed.

UNITA, a rebel group turned opposition party led by Adalberto Costa Jr., is hoping to capitalize on these frustrations, as millions of youths vote for the first time on Wednesday.

It is promising more jobs and better education than has been provided by the party that has governed Angola since it won independence from Portugal in 1975.

Since taking power in 2017, President Joao Lourenço has taken a tough line on corruption and promised to reform Angola’s oil-addicted economy so that it works for everyone.

‘HARD LIFE’
The country emerged from a 27-year civil war between the MPLA and UNITA in 2002, but its youth barely remember this history, and worry more about economic ills.

“The vote of these young people is key because most want change,” said Zola Bambi, head of a social cohesion and justice watchdog.

Elson Caluewo, 27, had to drop out of college when he ran out of money. He used to support the MPLA but now wants change.

“It’s a hard life,” he said. “The state … does not create conditions for a decent way of living.”

The danger of all this youthful enthusiasm, analysts say, is that their frustrations could quickly boil over if, as in past polls, the MPLA wins an election seen as fraudulent — something the electoral commission has promised won’t happen.

A report by the Institute for Security Studies said that in that case, violent demonstrations would likely follow.

“Even if there are no protests immediately after the election, the challenges the government faces in addressing basic economic needs are still going to put the country at a high risk of protests (in the future),” said Justin Pearce, senior lecturer in history at South Africa’s Stellenbosch University.