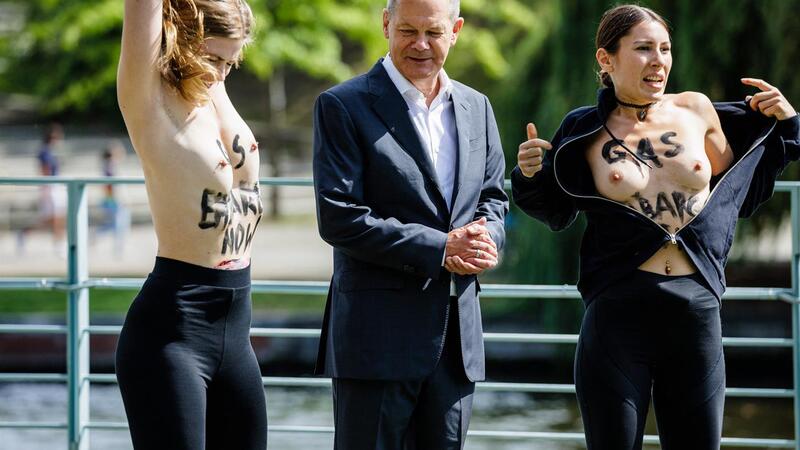 The two activists, who took advantage of the government open days held over the weekend to gain access to the German chancellor, were quickly taken away by security agents.
Two activists took German Chancellor Olaf Scholz by surprise, taking a picture with them on Sunday before stripping naked without warning and posing topless to demand a “gas embargo now” against Russia.

The two activists, who took advantage of a government open day held over the weekend to gain access to the German chancellor, were quickly detained by security agents after their action denouncing Moscow’s invasion of Ukraine.

Despite desperately seeking another way, Germany, which is heavily dependent on Russian gas, has so far been unable to impose a full embargo on Russian gas.

Efforts made by Berlin to find an energy alternative

Questioned by the public on Sunday, Olaf Scholz recalled the various efforts made by Berlin to find alternative sources of energy, including liquefied natural gas, whose first terminals, which Berlin is preparing to build, could be operational by early 2023.

“So our security of supply issue may be resolved by early 2024,” he continued.

Germany, like many of its European neighbors, will experience power shortages this coming winter.