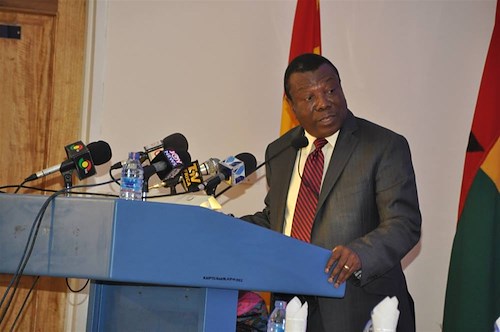 MONROVIA – Dr. Toga Gayewea McIntosh has endorsed the presidential bid of former Coca-Cola executive, and ANC political leader, Alexander Cummings. In his endorsement statement at noon on Wednesday, August 3, 2022, Dr.McIntosh, a principal representative of the Liberia People Democratic Party (LPDP) on the CDC’s governing council, argued that he is disturbed and deeply concerned about the misdirected path Liberia is taking.

He has also directed that the LPDP withdraws his appointment from the Governing Council of the CDC and replace him with another partisan.

It seems to me that the leadership of the coalition, including members of the Governing Council, did not, or cannot adequately manage the misdirection in which our dear Mama Liberia is going

Dr. McIntosh said Liberians overwhelmingly voted in 2017 for the CDC as a testimony of their burning desire for change but have been let down by both the government and the leadership of the ruling coalition. “Elections are far gone”, he said, and the “promised hope” for our people has become a “lost hope”.

Dr. McIntosh a former Minister of Foreign Affairs and one of Liberia’s most accomplished economists argued that though faces and names might have changed in the governance landscape, “the promised hope for our people has become an “illusory hope” to many”.

The revered economist said Liberians under the CDC administration are not moving sufficiently in the change direction which was set forth in the coalition’s manifesto, adding that all social and economic indicators show “that we are far from taking Liberia to where we had promised, leaving our people disillusioned and heartbroken”.

The ex-foreign Minister noted that the ingredients for lifting Liberia up, are sadly in short supply in today’s Liberia. This and many other signs led him to a troubling question: “what is going on, and why is it going this way?”

I concluded in my search for a realistic answer, that any needed result or outcome from a governance process depended heavily upon the demonstration of the leadership team that is possessed with a clear visionary path, uncompromising commitments, and a collective sense of purpose. My assessment of the presidential candidates shows that Mr. Alexander B. Cummings (ABC) has most of all that it takes, to serve adequately as captain of a well-prepared team to save our dear country, Liberia, out of the doldrums of the woes and depression we are experiencing today. It is against this conviction that I, Toga Gayewea McIntosh do hereby, through this platform, publicly endorse the presidential bid of Candidate Alexander B. Cummings of the Alternative National Congress (ANC) and to pledge my support in the ABC Real Change Revolution.

He said his choice of Cummings for President was not a wild choice, but a deliberate decision taken following a series of consultations and reflections.

Given where Liberia is today, Dr. McIntosh acknowledged that all conscious-minded Liberians must look and act beyond party politics, family relations, and friendships in the interest of our motherland as Liberians have no choice but to regroup and work harder and honestly to rescue the country from the current deep hole she finds herself in.

Dr. McIntosh said, “as a citizen, but also as someone who helped get the current leadership elected, I feel a bounding duty to my fellow Liberians to call a spade a spade. Things are bad and only getting worse. Our mama Liberia has entered a state of comma. The priority on the Liberian agenda must therefore be one of saving our dear Liberia. What is most important in this case is putting Liberia first in whatever we do. We have a duty to change what we can change now to create the future we sought for our country”

Dr. McIntosh underlined Liberia needs “a new kind of thinking” in its approach to growth and development, rewrite a new narrative to ensure survival and development, and redefine the political structures and economic directions of the nation-state.

“I am not talking about merely changing party names and actors only to repeat the past failures. We need a good break from the past to create a new Republic of Liberia. This is a must and precondition, if our people are to be lifted out of abject poverty, and if our dear country is to be taken off the slope of underdevelopment”.

Alexander Benedict Cummings Dr. McIntosh explained has exhibited uncommon wisdom, remarkable vision, and exemplary and purposeful leadership to bring about Real Change that would liberate Liberia and her peoples from the current strangulation.

According to Dr.McIntosh “,ABC brings to the table his wealth of administrative and managerial experiences, and his extensive international contacts, particularly, in the global business community. He has a proven spirit of hard work, commitment to duty, and a clear vision to lead the charge for Liberia to recover all the lost years that our country has experienced.”

Meanwhile, Dr. McIntosh has cautioned that 2023 presents another opportunity to rescue the country, and this Liberians must do because the country has “been brought down on its knees during the last four and a half years.”

“Liberia is technically bankrupt in the various sectors of our economy and society which requires higher levels of international and domestic confidence in Liberia that will lead to renewed investments, and respectability to begin the process of revitalization, growth, and sustained development”.

He expressed thanks to the Political leader, the Advisory Committee, the Executive Committee, and partisans of the Liberia People Democratic Party (LPDP), for the political space given him within the party, highlighting that his decision to support candidate ABC is a “personal one and does not in any way mean that he was leaving, or has left the party”.