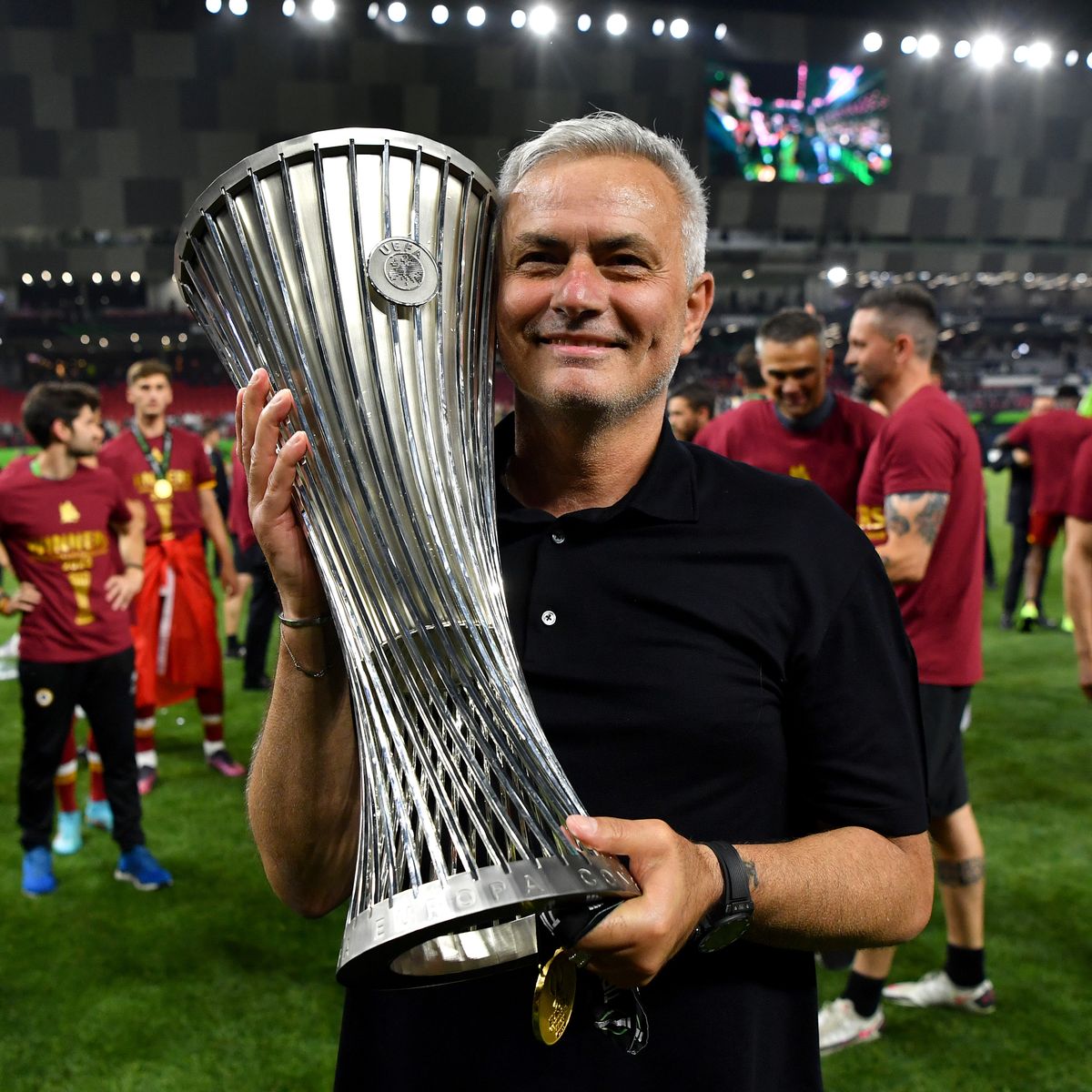 Jose Mourinho showed he retains the Midas touch in European finals as his Roma beat Feyenoord 1-0 to become the inaugural winners of the Europa Conference League.

Nicolo Zaniolo stylishly scored the only goal in the 32nd minute at Tirana’s National Arena.

Roma’s first European title was the 16th different trophy of Mourinho’s decorated career as he made it five wins out of five in continental finals.

Feyenoord pushed their Serie A opponents hard after halftime, but this is how Mourinho’s men refused to be denied.

Mourinho tactics give Roma the first-half edge
Once upon a time, Mourinho was the coach in his early forties taking a young team swaggering into European finals. In some respects, the extent to which the 59-year-old’s Roma side nullified Feyenoord only served to underscore what a phenomenal achievement it was for him to win UEFA Cup and Champions League with Porto in 2002/03 and 2003/04, respectively.

In Tirana, Feyenoord’s 43-year-old coach Arne Slot played the role of new kid on the block and it took his side until early in the second half to assert itself — twice hitting the post as Roma ‘keeper Rui Patricio made a pair of wonderful saves.

“The Special One is an old story,” Mourinho said, slightly wearily at the pre-match news conference, when his old self-declared nickname was brought up. “When you have more maturity and stability you think much more about the people and less about yourself.​ I can just do what every coach can do and try to help the team.”

Lining up in what has become Roma’s customary 3-4-3, Mourinho certainly did help his players. Feyenoord looked to attack in a narrow 4-3-3, with Arsenal loanee Reiss Nelson to the fore in the early exchanges. But the open spaces offered to wingbacks Rick Karsdorp and Nicola Zalewski were a puzzle the Eredivisie side never truly solved in the first half.

Karsdorp and Zalewski did not make major attacking contributions themselves, but Feyenoord falling deep to cover them was part of the reason right-sided central defender Gianluca Mancini had so much time and space to pick out Zaniolo for the decisive goal.

Chris Smalling makes his England case
The sort of doggedness Mourinho expects from his defensive units was in evidence when Feyenoord found their voice in the second period. The experienced Rui Patricio showed exceptional reactions to deny Guus Til and then tipped Tyrell Malacia’s rasping long-ranger onto the same post that Mancini inadvertently hit a few moments earlier.

It was a familiar sight for those who observed Mourinho’s Manchester United and Tottenham sides retreat into their shells to defend slender leads — Lorenzo Pellegrini shepherding the ball to the corner flag with 80 minutes on the clock lurched dangerously close to self-parody — but the Serie A side had the defensive muscle to see the job through. Roger Ibanez made a perfect last-ditch intervention to deny Cyriel Dessers with an hour played.

That came after Roma center back Chris Smalling lost his footing — arguably the only time the England international made a wrong move, and even then he managed to partially inconvenience Dessers. During the first half, Smalling’s positioning, anticipation, pace and strength were all on display to drive the competition’s top scorer to distraction.

At 32, Smalling’s days with the Three Lions appear to be over, but as Harry Maguire struggles for form and John Stones emerges from an injury-hit season, England manager Gareth Southgate should know he has a resurgent option available in the Italian capital, as his superb block to deny Dessers his 11th goal of the competition nine minutes from time proved.

Tammy Abraham’s future is at Roma
The most famous English success story in Rome this season has been Tammy Abraham, the former Chelsea youngster who has hit 27 goals in all competitions — including nine in 13 Conference League outings. Had he added two or three to that tally in Tirana, the headlines would have been easy to imagine, the clamour for a return to the Premier League hard to resist.

In that context, Abraham maybe produced the perfect performance in the final. There were no money-spinning fireworks, but he led the line expertly, which is no easy task once a Mourinho side becomes reactive. He was isolated at times, but he tirelessly ran the channels when he lacked support through the middle.

At the end of one such foot race with Marcos Senesi, he beat his chest and fired up the Roma support, who roared back in approval. When Abraham got the better of Senesi, who endured a truly torrid time at the hands of Roma’s No. 9, in the 53rd minute he was through on goal and crudely pulled back The lack of either a red card or a VAR intervention was inexplicable and, frankly, an advert for diving.

Thankfully Abraham did not have to reflect upon that with anguish as he added to his UEFA medal collection, although he did not feature in either of the Champions League or Super Cup showpieces with Chelsea last year.

At Roma, he is integral and exactly where he needs to be. At 24, there is no need to gamble a career on a sharp upward trajectory in the transfer market.

Nicolo Zaniolo makes up for Italy heartache
Their Premier League links are certainly strong, but Roma’s maiden European trophy was sealed by one of Italy’s brightest young talents. Few people will begrudge Zaniolo being the hero after the injury nightmare he endured in 2020.

The attacking midfielder was in line to feature as part of Roberto Mancini’s Azzurri squad that marched all the way to glory at Euro 2021, only to be laid low by a second anterior cruciate knee ligament injury in the space of eight months in November 2020. Italy’s subsequent shock elimination in the playoffs for Qatar 2022 means he will have to wait even longer to shine on the biggest stage with his country.

Zaniolo’s wonderful chest control and deft finish for the only goal left no doubt that he possesses the talent to do just that when the time arrives. All the hours of agonising rehabilitation made worthwhile in one golden moment.