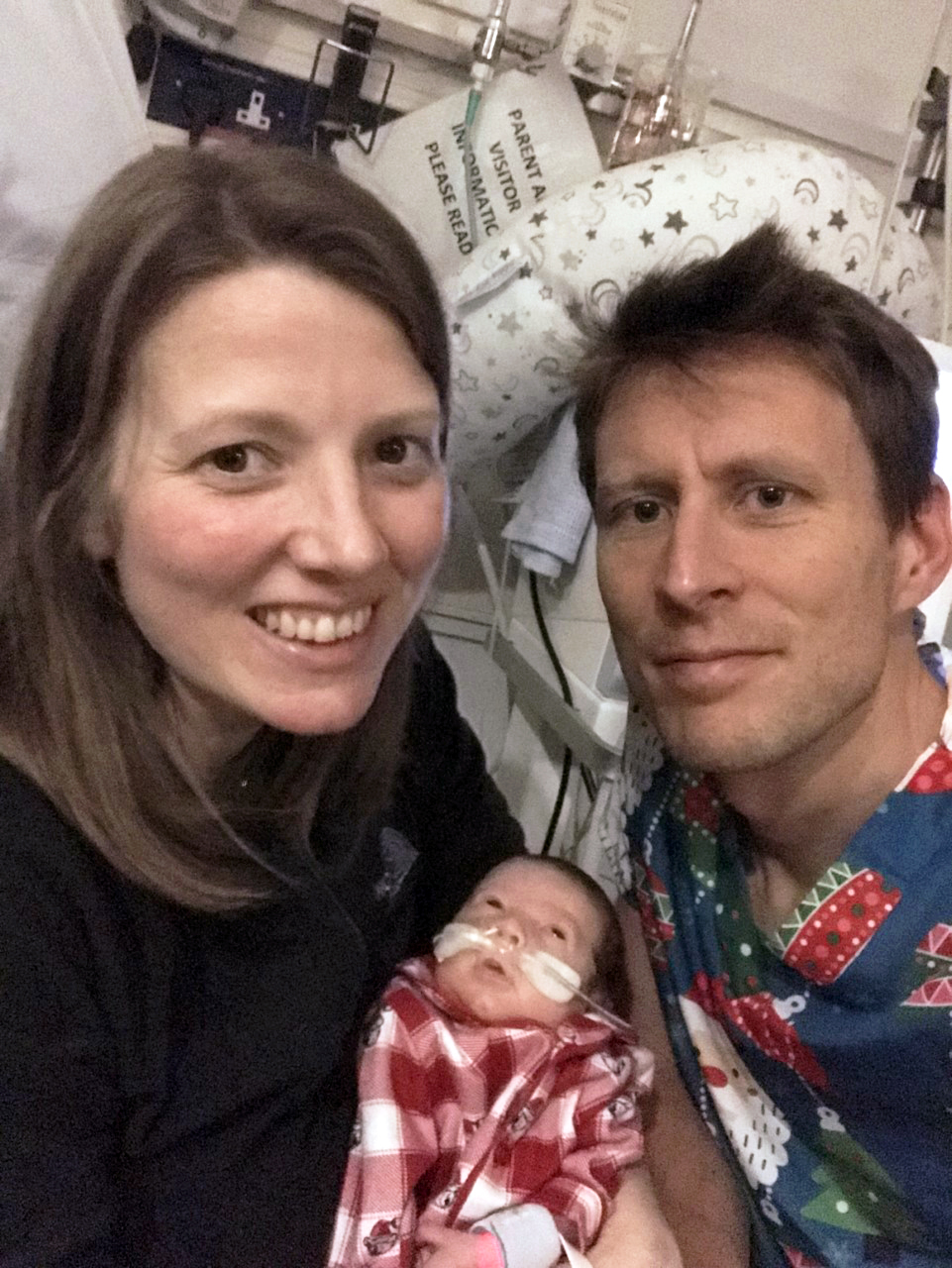 A doctor working in Monrovia, Liberia had to race halfway around the world to get back to the UK after his wife went into labour 11 weeks early.

Doctor Mikey Bryant, 36, who works with malnourished children, watched the birth of son Finley over video-link in November while hurriedly booking flights home to join his young family.

The family’s experience has inspired them to launch a medical campaign to raise more generous funds for the neonatal unit they set up in a hospital in Liberia so mothers and their newborns get the same excellent emergency care their son got and many newborns in the UK get on a daily basis.

Mr. Bryant said he had just completed his rounds on the hospital’s malnutrition ward and was about to do the same on the newborn ward when he had a message from home to say his wife Bethany had gone into labour.

He said: “I called one of Bethany’s friends who is a midwife in Singleton. She answered and I watched the whole thing on WhatsApp video.

“The team at Singleton knew I couldn’t make it there and they very kindly allowed that to happen.

“I obviously had to fly straight back so there was some frantic running around in between watching Bethany go through the labour and getting a flight, and getting a Covid test to get out of the country and back here.”

The journey involved a drive of several hours to the Roberts International airport in Liberia, followed by two flights, with the trip taking a total of 24 hours door-to-door.

Self-isolation rules at the time meant he then had to wait a further two days before he could finally visit the hospital to see his wife and baby.

“What was so strange was going from caring for these tiny babies in Liberia to suddenly having one of our own in the unit in Singleton – a very odd, sudden change,” Mr. Bryant said.

For almost two months the pair commuted to and from the hospital every day from Pontardawe, in the Swansea Valleys, before they were finally able to take him home in January.

Mr. and Mrs. Bryant, a junior doctor, arrived in Liberia, a country considered by the World Bank as “among the world’s poorest countries” where child mortality rates are among the highest, in January 2019 to set up a programme working mainly with malnourished children at the ELWA Hospital in the capital Monrovia.

They said they could not have imagined that months later their own son would need the same life-saving treatment they were administering to children living thousands of miles away.

“The newborn area in the Liberian hospital is very basic, with only one working incubator, but at least it exists now,” Mr. Bryant said.

“What we’re trying to do is make sure we have enough supplies and medicines and various feeding tubes and things to actually keep people going. It’s a huge challenge.”

They have created a JustGiving page in the hopes of raising £10,000 to continue their work in Monrovia, Liberia.

Mrs. Bryant, 34, said: “We were so fortunate for the outstanding care that Finley received at the Singleton unit and we want newborns in Liberia to get the same care he did.

“These babies’ lives can be saved if we work together. We are so thankful for the care and encouragement many have shown in supporting the work to care for the children in Liberia.”

Since the programme started, child deaths due to malnutrition have fallen significantly. Training is also being provided to upskill Liberian healthcare staff, with 300 of them already attending a World Health Organisation Emergency Triage Assessment and Treatment course.

Mr. Bryant and his team have also created a five-bed pediatric emergency department and a busy clinic for children under five.

The project was expanded last November with the creation of a six-bed neonatal care unit with a new oxygen system, fluid management protocols and organized treatment plans for unwell newborns.

The fundraising page can be found at https://www.justgiving.com/fundraising/michael-bryant11.
Finley weighed 4lb at birth and needed support with breathing and feeding.