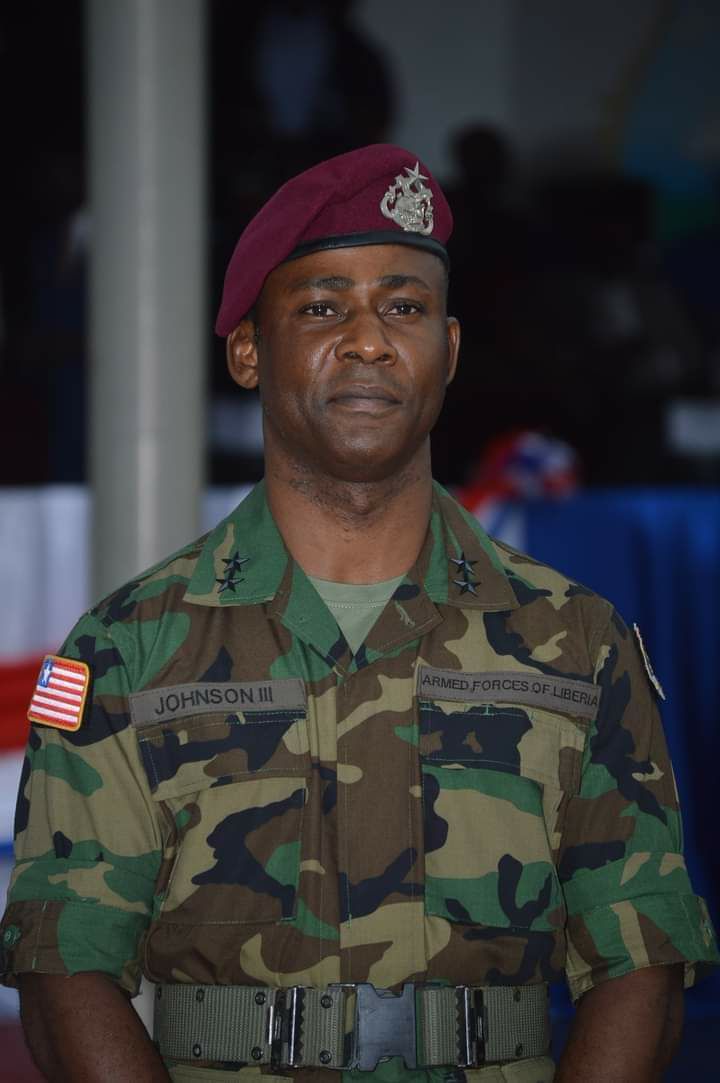 MONROVIA, LIBERIA-The Armed Forces of Liberia has successfully fought to shred its bad boy wartime image since 2003 and is now labeled a “Force for Good” due to so many tangible reasons including the AFL’s acclaimed ongoing peacekeeping stint in troubled Mali, now seems to be engaged in a new battle on the home front, very much related to the Army’s Mali engagement, which could offset the gains of the past two decades of peace in Liberia. AFL Chief of Staff Major General (Maj/Gen) Prince Charles Johnson, caught venting his frustrations in leaked audio, has exposed Finance Minister Samuel Tweah’s decision to interfere in military affairs as gravely dangerous to the national security of the state and active duty men and women fighting terrorism in Mali. He also went on to imply that such a position of interference shows the incompetence of the Finance Minister as a member of President George Weah’s cabinet, who should be more focused on straightening the country’s economic problems than on provoking operational instability and international/regional/ domestic embarrassment on the military.

According to Army Chief of Staff General Prince C. Johnson who seemed to be addressing a gathering of AFL personnel expected to be deployed in Mali, had no business making a policy statement regarding the AFL soldiers’ 20 percent compulsory salary deduction when in fact the Government of Liberia has not provided support for the Army’s Mali operations in the national budget. Many Liberians see Minister Tweah’s action and decision toward the military as a clear sign of the lack of civility in accountability and responsibility in Liberia. Others see his action as a clear manifestation of the political gangsterism spreading in the country and the freeloading of Liberians.

In a highly exasperated statement, the foremost respectable (Maj/Gen) Johnson said it was sheer tomfoolery for Finance Minister Samuel Tweah to make a policy statement that the “Government of Liberia will provide budgetary support for the operations of AFL soldiers assigned in Mali” under the aegis of the United Nations Peacekeeping engagement, but only on the condition that the “Army scraps the 20% compulsory salary deductions”.

“We think it is very silly, very stupid of the Finance Minister to make a policy pronouncement and not plan for the adequate implementation and consequences. “Again, I will say it was very stupid and silly”, whether it was for political business. “This is a clear example of what happened to the University of Liberia, I want to believe. People make pronouncements, and today we see the struggle at the University of Liberia and what they are going through”.

“The Finance Minister was stupid in saying that. He should have allowed the Minister of Defense or the President to make the pronouncement and not him”. He is not an expert when it comes to defense matters. He’s not supposed to make policy statements on the AFL or on behalf of the AFL. Imagine me coming to make public statements on financial issues when I am not a financial man”. “He was silly, he was stupid”. I have made my case to the appropriate authority and made the person understand that the Finance Minister was stupid in saying that. We will just wait for the government. When the government puts the money there, we will rent your house,” COS (Maj/Gen) Johnson said to the gathered AFL soldiers apparently awaiting deployment to Mali.

Explaining the importance of the AFL’s compulsory twenty percent (20%) salary deduction to his audience, COS (Maj/Gen) Johnson intimated that the AFL had dipped into the pay cut to offset contingency payments for Liberian peacekeepers, noting that the UN does not provide funds for issues such as soldiers’ housing, medical bills, etc.

COS (Maj/Gen) Johnson informed the gathering that the Army often had to “dig a hole, cover hole”, by using the proceeds from the soldiers’ compulsory twenty percent pay cut to satisfy other contingencies.

“Do you know that the $63,000 that was used to send Titus to India when he got injured came from the compulsory savings? The UN is always owing, even now, the UN owes like seven months,” (Maj/Gen) Johnson indicated.

Surprisingly, the Army Chief of Staff also likened the current predicament facing the Mali-bound Liberian peacekeepers to the situation with the former Defense Minister Brownie Samukai.

Meanwhile, credible information coming out of Mali speaks of the acute downgrading of morale amongst members of the Liberian Army contingent serving in that troubled West Africa nation. It is alleged that AFL personnel are now sleeping in the streets because they have not been provided funds for housing.

In the wake of the leaked audio which showed the Liberian Army Chief of Staff infuriated over the lack of budgetary support for soldiers deployed and expected to be deployed in Mali while Finance Minister Tweah calls for halt to the 20% compulsory pay cut that has been used to offset myriads of contingencies, concerned Liberians have been speaking their mind on the issue.

According to Varmah Christopher Kanneh, “The Chief Of Staff is a military man and he spoke like one. The Finance minister has no right to speak on military issues in the public. Everything about the military must be channeled by the President through the Ministry of National Defense, not the Finance Minister.”When the head of the military who isn’t a politician begins to register disappointment and frustration about how the government is proceeding with his men and women, then it speaks volumes that the government should be careful,” says Dudley Debois.

But Dasie Davies has an issue with the whole audio, especially the part that has to do with former Defense Minister Brownie Samukai.

“Government finish eating that money and got the nerve to make noise about Brownie Samukai,” Dasie Davies vented.

As for Mohammed V. Foday, the audio has too many security implications. “The security advisor to the President needs to meet the President urgently. This is serious. I can feel the frustration in this guy’s voice,” Mr. Foday lamented. All efforts to speak with the Minister of Finance, Samuel Tweah proved futile up to press time. We also sent him a text, but no response.

Originally published by the Analyst News