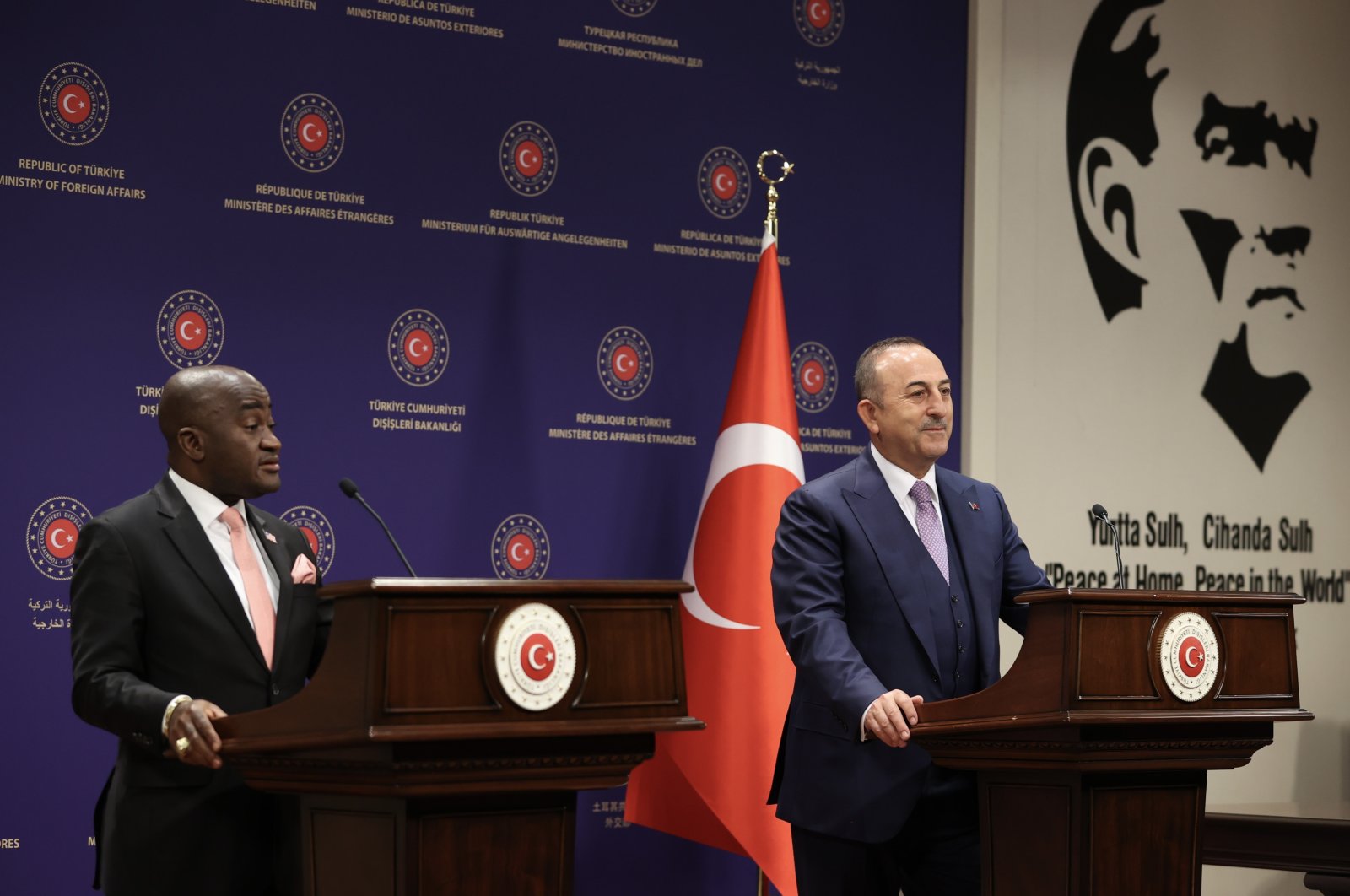 ANKARA, Turkey plans to improve its relations with the African continent, and take tangible steps to deepen ties with regional organizations such as the African Union and Economic Community of West African States (ECOWAS), the foreign minister said on Thursday.

They discussed all aspects of bilateral ties, developments in Africa, security issues and the Russia-Ukraine war, Çavuşoğlu said.

The measures against the Gülenist Terror Group (FETÖ), the terrorist group behind the defeated coup of 2016 in Turkey, and the situation of Turkish companies in Liberia were also discussed during the meeting, he added.

“We will further deepen our relations with African countries, the African Union and regional organizations such as ECOWAS,” he said. “We will take more tangible steps on many issues in the period ahead,” the foreign minister added.

Çavuşoğlu noted that it is of great importance to sign an accord on economic cooperation to achieve these goals, and added that the draft agreement would be ready within a month.

The two countries have also begun negotiations on a memorandum of understanding (MoU) on the defense industry, he said, noting that they also have boosted their cooperation in training special forces, and the fight against terrorism and organized crime.

He said there was a wide range of areas for cooperation, including the tourism and finance sectors, and several Turkish companies were ready to invest in the energy sector of Liberia.

With their bilateral relations growing at a quick pace, Turkey has already started works to build an embassy in the Liberian capital on instructions of President Recep Tayyip Erdoğan, he noted, saying Ankara was ready to provide all kinds of assistance to Liberia, which plans to open its own embassy in the Turkish capital.

The Turkish minister welcomed Liberia’s support to fight the FETÖ terror group by taking over its schools, and said Turkey’s Maarif Foundation could open new schools in the country or take over the responsibility of schools seized from the group.

The Maarif Foundation was founded on June 17, 2016, and one of its missions was to run the schools captured from FETÖ, the culprit behind the July 15, 2016 coup attempt, which also runs an international network of schools. In time, Maarif expanded its scope beyond this simple mission, turning into an education juggernaut, representing Turkey abroad.

Kemayah, for his part, said the bilateral relations have gained momentum in recent years and that he met Çavuşoğlu five times in the past year alone.

“We have said that we wanted to further advance our bilateral ties and strengthen our bond,” he said and noted that the diplomatic relations between the two countries were relatively new but were promising.

The foreign minister of Liberia said his country was ready to cooperate in fighting terrorism and he was glad that they would be collaborating closely with Turkey in this regard.

Noting that the population in Liberia was young, making it necessary to provide the youth with opportunities, he also thanked Turkey and its aid agency, the Turkish Cooperation and Coordination Agency (TIKA), for its moves in Liberia.

Turkey aims to win alongside Africa and march together toward the future, Çavuşoğlu said in late 2021 in his commencement speech at the third Turkey-Africa Partnership Summit’s foreign ministers meeting in Istanbul.

Ankara has frequently reaffirmed that Turkey’s approach in its ever-growing relations with African countries is based on equal partnership and a win-win principle, emphasizing the strong will to further develop commercial ties. Erdoğan last year embarked on a four-day diplomatic tour to three African countries, Angola, Nigeria and Togo, as part of the country’s African policy to contribute to the economic and social development of the continent with peace and stability, as well as to develop bilateral relations on the basis of equal partnership and mutual benefit. During the tour, Erdoğan underlined that Western countries for years exploited the continent of Africa for their own interests and reiterated his message for a fairer world by calling the oppressed to act together for this aim.

Turkey’s engagement with the African continent has been gaining pace over the years. Since taking office nearly two decades ago, first serving as prime minister, Erdogan has been fostering ties with Africa, presenting Turkey as a fairer player than the continent’s former colonial powers. Ankara has been stressing the desire to advance relations with the continent on the basis of a win-win relationship and equal partnership while observing mutual respect. Both sides have been vowing to tap into their greater potential when it comes to further expanding and deepening relations. To this effect, the number of Turkish embassies in Africa has increased from just 12 in 2002 to 43 in 2021. Turkey’s trade with Africa totaled $5.4 billion (TL 87.65 billion) in 2003, which climbed to $25.3 billion by 2020 despite the coronavirus pandemic. Turkish Airlines offers flights to 60 different destinations across 39 African countries while TIKA has nearly 30 coordination centers on the continent. The Foreign Economic Relations Board (DEIK) has joint business councils with more than half of the nations in Africa.

Having adopted a one-dimensional foreign policy shaped by its relations with the West for decades, Turkey has shifted to a more diversified, multidimensional and independent foreign policy since the end of the Cold War. Turkey’s opening up to Africa, which dates back to the action plan adopted in 1998, took shape in 2005, which Ankara declared the “Year of Africa.” Turkey was accorded observer status by the Africa Union the same year. In a reciprocal move, the African Union declared Turkey its strategic partner in 2008, and relations between Africa and Turkey gained momentum when the first Turkey-Africa Cooperation Summit was held in the commercial capital Istanbul with the participation of representatives from 50 African countries that year.