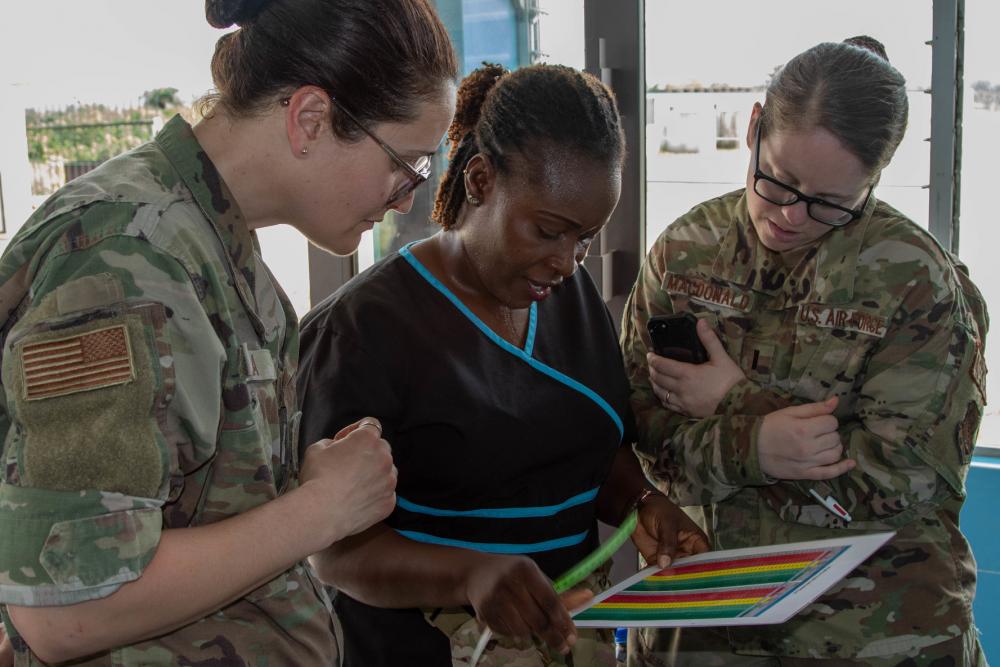 The man was dead.

“Without the emergency medical team’s intervention, the patient would have certainly passed away,” he added.

MING began working with the Armed Forces of Liberia (AFL) in November 2009, assisting the country with their medical response to infectious disease, engineering support and exchange of military best practices. The SPP is unique in that it links a state’s National Guard with the military forces of another country in a mutually beneficial military partnership.

Although many previous engagements involved sharing of military best practices, this current weeklong visit, from April 25-29, 2022, focused exclusively on advancing the capabilities of Liberia’s 14 Military Hospital.

For one man, the visit could not have come at a more opportune time.

A 72-year-old man was admitted to 14 Military Hospital on April 25, 2022, complaining of cardiac chest pains. After monitoring his heart with the hospital’s new electrocardiogram (EKG, based on the German spelling), emergency room (ER) personnel immediately knew the man was in critical condition.

“The EKG indicated he had a potentially lethal cardiac arrythmia,” Gomberg said.

This means the man had an improper electrical pattern in his heart. The medics attempted treatment with medication, but his condition continued to destabilize.

And then his heart stopped.

“We immediately administered CPR,” said Gomberg. “We managed to get his pulse back after he died, but he still had an unstable rhythm. At that point he was defibrillated and a normal heart rhythm was restored.”

The man was kept in the hospital overnight for observation and tests, but the next morning he was alert and eventually released under the care of his family. This marks the first ever cardiac resuscitation performed at the hospital.

It was also the first day of the Michigan medical team’s visit.

The rest of the week, the team provided a combination of side-by-side mentorship as well as assessment of current medical and administrative capabilities. Along with their life-saving intervention in the ER, activities also included orthopedic surgeries, hands-on suture training, assistance in the newborn intensive care unit (NICU), the hospital’s infant and child malnutrition program and logistics planning support.

MING is dedicated to their Liberian partnership as the cross-collaboration benefits both militaries, including the continued advancement of the recently opened hospital, the first military hospital in the country’s history.

Gomberg was joined by members of Michigan’s Air and Army National Guard.

U.S. Army Staff Sgt. James Dewitt and Sgt. Gustavo Pop Monroy, combat medics also assigned to 3-126th IN, spent their week providing mentorship to the staff for responding to a variety of adult and pediatric emergencies.

“It was ideal timing that our team was going over EKG and heart monitoring on day one,” said Bearup. “Because two of the first few patients we saw in the ER had major heart issues.”

Thankfully, the team was able to address, mentor the staff and assist in both patient recoveries.

“We’re sending three medical teams to work closely with Liberian partners over a six-week period this summer,” said MacDonald. “Our current visit will tell us which areas need the most focus at the hospital.”

Thus far, she mentioned healthcare administration and nursing leadership will be critical areas for further development.

This is MacDonald’s second visit to 14 Military Hospital. She is amazed how far they came since her last time in the country, back in September when the hospital opened. Avila echoed the sentiment.

“This has been an amazing experience,” said Avila. “My favorite part was working with the young moms and infants in the children’s malnutrition program.”

This program, as well as the entire hospital’s continued success could not be possible without numerous contributions from those inside and outside the organization.

Staff members, Dr. Kevin Strathy, an American retired plastic and reconstructive surgeon, and his wife, Natu, a native-born Liberian nurse, serve as medical consultants inside the hospital. Together they started a medical non-profit to attain donations of supplies and equipment.

Natu, who received medical training in England, continually mentors the hospital’s nursing staff. Her focus is primarily on making each section of the hospital more efficient and developing additional capabilities, such as introducing a burn victim unit.

Meanwhile, Dr. Strathy teamed with Gomberg to lead a series of suture courses over the week-long medical exchange. They discussed different stitching techniques, then mentored hospital staff as they conducted hands-on sutures with pig feet.

“Getting proficient with stitching or suturing will not only help with healing, but it also helps make sure conditions are more sanitary,” said Strathy.

They emphasized wearing gloves and properly closing wounds to prevent infection. This is very important in an area of the world where antibiotics are in short supply.

This is also where organizations outside the hospital come into play.

“The AFL and 14 Military Hospital are doing incredible work,” he added. “We value their partnership and we’re continually looking for more ways to assist them in serving the people of Liberia.”

Based on the current visit, Michigan determined that more focus must be given to preventive medicine, stroke awareness and burn victim treatment. However, one thing is very clear: the hospital is already saving lives.

But the word must get out. More people need to know.

“I tell those who are sick or hurt that they should pray,” said Everts. “But pray on your way to the hospital!”