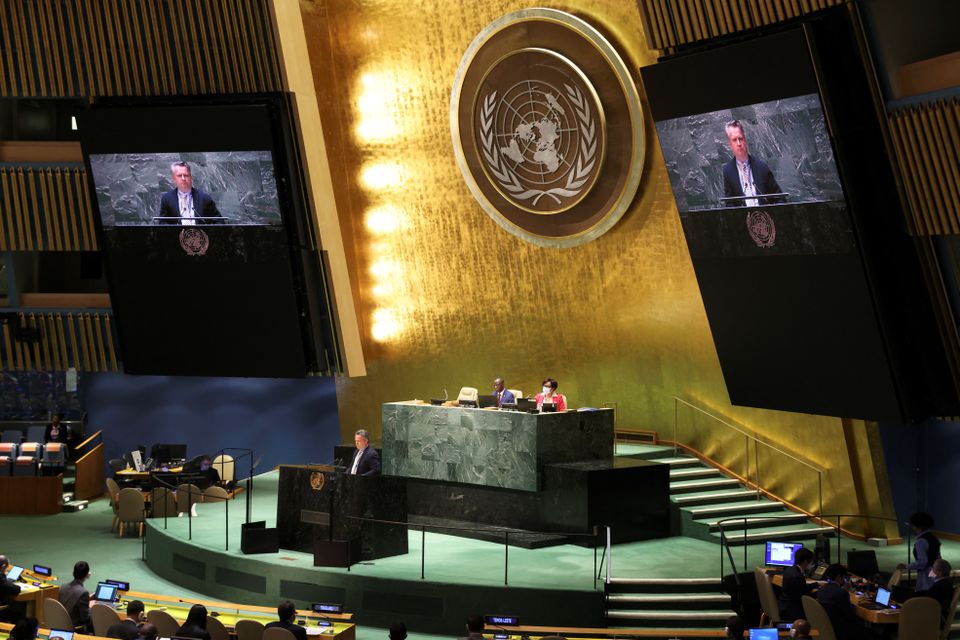 UNITED NATIONS – The United Nations General Assembly on Thursday suspended Russia from the U.N. Human Rights Council over reports of “gross and systematic violations and abuses of human rights” in Ukraine, prompting Moscow to announce it was quitting the body.

The U.S.-led push garnered 93 votes in favor, while 24 countries voted no and 58 countries abstained. A two-thirds majority of voting members in the 193-member General Assembly in New York – abstentions do not count – was needed to suspend Russia from the 47-member Geneva-based Human Rights Council.
Speaking after the vote, Russia’s deputy U.N. Ambassador Gennady Kuzmin described the move as an “illegitimate and politically motivated step” and then announced that Russia had decided to quit the Human Rights Council altogether.

“You do not submit your resignation after you are fired,” Ukraine’s U.N. Ambassador Sergiy Kyslytsya told reporters.

Russia was in its second year of a three-year term. Under Thursday’s resolution, the General Assembly could have later agreed to end the suspension. But that cannot happen now Russia has quit the council, just as the United States did in 2018 over what it called chronic bias against Israel and a lack of reform.

The United States was last year re-elected to the council. Suspensions are rare. Libya was suspended in 2011 because of violence against protesters by forces loyal to then-leader Muammar Gaddafi.

“We ensured a persistent and egregious human rights violator will not be allowed to occupy a position of leadership on human rights at the U.N.,” she said in remarks to be delivered to the General Assembly later on Thursday.

The Human Rights Council cannot make legally binding decisions. Its decisions send important political messages, however, and it can authorize investigations. Last month the council opened an investigation into allegations of rights violations, including possible war crimes, in Ukraine.

The resolution on Thursday was the third adopted by the 193-member General Assembly since Russia invaded neighboring Ukraine on Feb. 24. The two previous General Assembly resolutions denouncing Russia were adopted with 141 and 140 votes in favor.

“Such a hasty move at the General Assembly, which forces countries to choose sides, will aggravate the division among member states and intensify the confrontation between the parties concerned – it is like adding fuel to the fire,” China’s U.N. Ambassador Zhang Jun said before the vote.

The General Assembly text on Thursday expresses “grave concern at the ongoing human rights and humanitarian crisis in Ukraine,” particularly at reports of rights abuses by Russia.

Russia says it is carrying out a “special military operation” that aims to destroy Ukraine’s military infrastructure and denies attacking civilians. Ukraine and allies say Moscow invaded without provocation.

Russia had warned countries that a yes vote or abstention will be viewed as an “unfriendly gesture” with consequences for bilateral ties, according to a note seen by reporters.