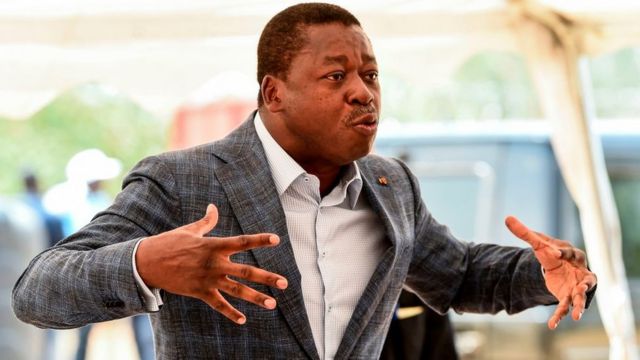 Lome, Togo – The Togolese government has dismissed nine teachers, within a week of firing 137 others, even as the teachers union continues to demand that the Faure Gnassigbe administration honor its promises to them.

The decision to dismiss more teachers was announced on Tuesday by Gilbert Bawara, the minister of civil service and labour. The move came nearly one week after the March 30 dismissal of 137 teachers for the same reason following a strike launched by the Togo Teachers’ Union (SET) from April 4 to 7.

All the teachers were banned from teaching and will be redeployed by the ministry of civil service and labor as Bawara said they were “agents who have shown themselves repeatedly in actions contrary to the requirements of teachers”.

The union is not recognized by the administration and decentralization ministry, unlike the Coordination of Education Unions of Togo (CSET) and the Togo Workers’ Synergy (STT).

In a March 30 tweet, Bawara said SET has “continued to show an attitude of defiance towards the authority of the State”.

Longstanding issues in the sector
The problems plaguing Togo’s education sector are not new, and teachers say the current working conditions in the country are not suitable, leading to a number of strikes.

On March 10 the government signed a memorandum of understanding with education sector stakeholders to iron out outstanding issues, including pay.

Per the agreement, the government will release 5 billion CFA francs (about $8.3m) to pay for bonuses over the 2021-2025 period.

The funds, already pledged in April 2018 as part of an earlier agreement with CSET and STT, will take the form of an annual allowance for teachers and volunteer teachers in public schools. Part of the package will also serve as a national fund to enhance the education sector.

The MoU also mandates that the central administration recruit more teachers across various disciplines to beef up the education personnel.

“We have demonstrated, once again, that when the general interest and a common cause require it, we can go above and beyond, and have a responsible attitude and spirit.” Bawara, whose ministry is a signatory to the MoU, said following the signing. Parties included in the MoU were the federation of unions and the national coalition of education for all.

But SET said it was not a party to the agreement and on April 1 it wrote to Bawara to announce the strike.

While calling for the April 1 strike, the union accused the government of ignoring its repeated demands for a monthly allowance of 50,000 CFA francs (about $83) for all teachers along with other bonuses, and for the recruitment of volunteer teachers.

Kossi Kossikan, the deputy secretary-general of the union and one of the dismissed teachers, told French media outlet RFI that the government’s problem with SET was that: “We are a strong, democratic union… directly from the grassroots, it is not a union that is controlled”.

He claimed that the government was using all its means “to stifle us, but we are serene and the struggle must continue because the base refuses.”

The April strike call follows that of March 24-25, also ruled illegal by the government which sanctioned anyone who observed it.

The tug of war between the central government and the teachers is coming just before the term exams, slated for May.

Education is an integral part of Togo’s ambitious 2020-2025 national development roadmap and it has pledged to invest 150 billion CFA francs (approximately $250m) into the sector nationwide.

“In Togo, although we have a budget that corresponds to about 25 percent of the national budget, the share devoted to [early education] is low,” he said.

According to the UN Sustainable Development Goals 2021 report, Togo has made significant progress in its net primary enrollment rate, scoring 98.8 percent in 2020, up from 90.7 percent in 2018.

The government has announced the planned recruitment of more than 3,000 teachers and the construction of 30,000 classrooms by 2025.