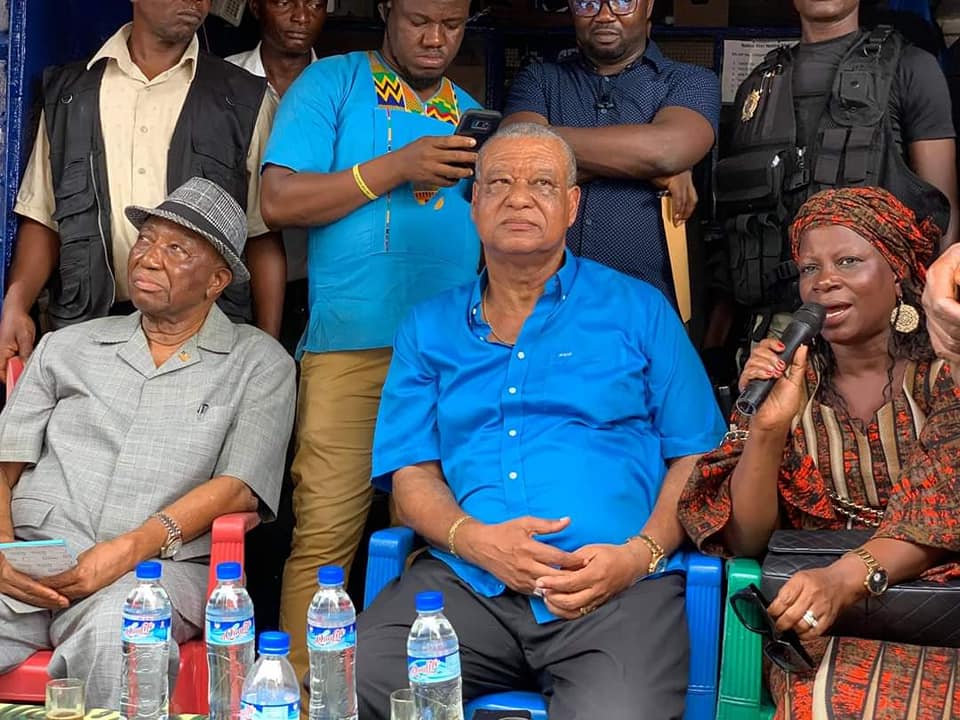 MONROVIA – The feud and animosity among executives and members of the shattered Collaborating Political Parties (CPP) continue to intensify on a regular basis as evidenced by the latest request made by the Alternative National Congress (ANC) of Mr. Alexander Benedict Cummings and the Musa Hassan Bility’s fraction of the Liberty Party (LP) to the National Elections Commission (NEC) for the rejection of the former ruling Unity Party (UP) and the All Liberian Party (ALP) from contesting in the 2023 general and presidential elections.

In December last year, the National Executive Committee (NEC) of the ALP of the businessman turned politician Benoni Urey, announced that it was pulling out of the CPP on allegation of the altering of the framework document which brought the four parties together. Nearly two months later, the UP, through its Standard Bearer, Joseph Nyuma Boakai, on Wednesday, February 16, 2022, announced its withdrawal from the collaboration after failed efforts to resolve the internal impasse within the party.

The impasse led to the filing of a lawsuit against Mr. Cummings and a few of his party’s executives by the ALP.

Recently, the Senator Nyonblee Karnga-Lawrence fraction of the Liberty Party also announced its withdrawal from the CPP, accusing the ANC of allegedly altering the framework document in a resolution issued.

“The CPP is now further beset with a seemingly intractable conflict growing out of the mishandling of the CPP Framework Document by the ANC during its eight (8) months of leadership as is being demonstrated by multiple acrimonies involving the said ANC and other constituent Political Parties of the CPP, which have resulted to litigations contrary to the spirit and determination of the collaboration. As a result of the aforementioned, it has now become glaring that the purposes that underpinned the establishment of the Collaborating Political Parties, as expressed in the Framework Document, can no longer be realized under the circumstances herein stated”.

But the Musa Bility-fraction of the LP, which continues to enjoy legal backing from the NEC, and the ANC, officially complained the UP and ALP to the commission in a letter dated March 21, 2022.

They complained that though the Bility-fraction of the LP and the ANC have learned through the media and several online interviews of officers of the UP and the ALP, both parties have failed to officially notify the body through its National Advisory Council or the National Executive Committee of the CPP.

“There have been no official communications from the ALP or UP to either the CPP National Advisory Council or National Executive Committee regarding the said withdrawal. We also learned that both parties have requested the commission to bar the use of their name and logo from the CPP logo”, the communication stated.

The ANC and Bility-fraction of the LP also called on the NEC’s attention to Section 8.5 (2) of the CPP framework document which prescribes the process by which a constituent party may withdraw its membership from the CPP.

Section 8.5 (2) of the CPP framework document states that: Constituent Party desiring to withdraw from the CPP shall first exhaust the dispute resolution mechanism stipulated in the framework document. If the Constituent Party which has satisfied the dispute resolution mechanism is not satisfied with the outcome, it shall file a resolution to withdraw from the CPP signed and duly executed by two-thirds (2/3) of the membership of the National Executive Committee, it is being understood, however, that a party withdrawing from the alliance prior to the next presidential, legislative and local elections shall not field candidates in its name”.

“As such, we hereby inform the commission that we are invoking Section 8.5 (2) CPP framework document and requesting that the commission reject and deny any application from the ALP and UP to field candidates in their names in any election until the expiry of the 2023 elections, including up to six (6) months thereafter, same being the agreed contractual life of the CPP”.

In the communication, the ANC and Bility-fraction of the LP admitted that the withdrawal of the UP and the ALP has paralyzed the workings of the CPP.

They claimed that the withdrawal disrupted the effectiveness of the body, including its national chairmanship, rotational headquarters, rotational leadership of its various organs, including the secretariat, and meetings to determine and evolve positions on national questions.

“This is because, at the time of the so-called withdrawal, the CPP rotational chair happened to have been the Unity Party”, the statement maintained.

The communication prompted a quick reaction from the Unity Party barely a few days after it was submitted to the NEC.

In a statement issued Thursday afternoon, the UP disclosed that it has “seen a document signed by Musa Hassan Bility, Martin Kollah and the Alternative National Congress (ANC) making rounds on social media, supposedly from the Collaborating Political Parties (CPP), that carries the emblem of the Party as a member of this group”.

The party reiterates its March 21, 2022 letter to the ANC, the All Liberian Party (ALP) and the Liberty Party (LP) instructing the removal of the Party’s emblem from all instruments of the CPP going forward in line with its withdrawal from said alliance.

Meanwhile, the Unity Party has strongly warned Mr. Musa Bility, Mr. Martin Kollah and the Alternative National Congress against the use of its emblem on any document purporting to be from the CPP.

“Failure to do so would leave us with no other option but to take all necessary legal actions against these individuals and the ANC. Let this serve as sufficient notice to all parties concerned”, the party maintained.

With the latest issue, all eyes will now be on the NEC, which now sits in the middle, to take a decisive decision that could either place the final nail in the coffin of the CPP or bring back the once vibrant opposition political collaboration together.

Vast majority of Liberians, especially less fortunate eligible voters that are living in extreme poverty and hardship, have consistently expressed their frustration over the split of the CPP.

These destitute and frustrated citizens who are in dire need of a change in national leadership to guarantee the elevation of their livelihood, will now have no other alternative but to adhere to the popular Liberian adage which says “it’s better to be with the devil you know, then the angel you have not seen”, or to look elsewhere for a genuine change for the betterment of their lives and the transformation of the nation.