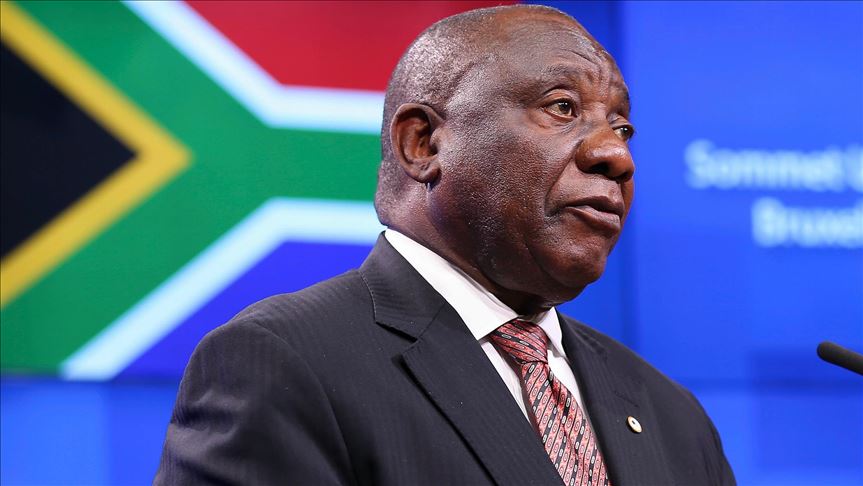 Johannesburg, South Africa – On February 28, Raymond Zondo, South Africa’s acting chief justice, handed the third and penultimate part of a report from the judicial commission of inquiry he chairs, to President Cyril Ramaphosa.

It was another chapter of arguably the most anticipated report in the Rainbow Nation, an investigation into what has been described as its largest post-apartheid corruption scandal.

It came two months after the president had received the first part of the report from Zondo’s commission. The commission, which held its first hearing in August 2018, sat for close to four years after several extensions of an initial mandate of 180 days.

‘State capture’
The report is effectively an inquiry into the affairs of Ramaphosa’s embattled predecessor Jacob Zuma, erstwhile boss to both Ramaphosa and Zondo, who was appointed in January 2018 to investigate corruption in government following recommendations in 2016 by the then-Public Protector, Thuli Madonsela.

Madonsela’s term “state capture” became popular during the Zuma years and gave regular citizens an insight into the behaviour of different state actors.

In 1993, the billionaire Gupta brothers, Ajay, Atul and Rajesh, arrived as immigrants from India and sent up a family business. Investigators and analysts say their businesses provided the perfect front to amass wealth through political connections with the ruling African National Congress (ANC), in general, and Jacob Zuma, in particular.

The Zondo commission’s hearings into the complex web reportedly spun by the Guptas and their associates went on for more than 400 days, with at least 300 witnesses testifying. The official record of the public hearings also comprises 75,099 pages of transcribed oral evidence.

Revealing testimonies were given on how the Guptas wielded immense power and influence in government, even selecting cabinet ministers. One investigator, who gave evidence of the Guptas’ involvement in money laundering, estimated that almost 50 billion rand ($3.3bn) flowed from the government to Gupta entities alone.

Both the Guptas and Zuma deny this.

But public pressure is growing for the brothers, who now live in Dubai, to be extradited for prosecution in South Africa.

The report recommended that heavyweights like Siyabonga Gama and Anoj Singh, former executives of state-owned infrastructure firm Transnet, as well as Brian Molefe, former CEO of public utility firm Eskom, be investigated for corruption and racketeering amounting to millions of dollars.

The latest part of the report also implicates Gwede Mantashe, the ANC chair, energy and mining resources minister and close ally of Ramaphosa. It recommended that Mantashe be investigated after a state prison contractor provided free security upgrades for three of his properties.

Since it was made public on March 1, the report has mostly received praise. Oscar van Heerden, political analyst and deputy vice-chancellor at the University of Fort Hare, called the commission’s work “the outcome of a very long process taking stock of the corruption within the government in collusion with the private sector and how it affected ordinary people”.

Phelisa Nkomo, Johannesburg-based development economist and chairperson of the Oxfam South Africa board, said the commission’s work was necessary “to remind us who we are as South Africans and why it is important that we hold people accountable”. She said that the country had seemed “on auto-pilot” at times.

The main opposition, the Democratic Alliance, said the report was proof that “the ANC is an organised crime syndicate”.

Woes for the ANC
For years, the ANC has been accused of sheltering corrupt individuals within its ranks, rather than prosecuting them. Given the report’s recommendations and public pressure to see some politicians and senior party members in cuffs, the government’s next steps will be closely watched.

This does not bode well for the ANC, the oldest liberation movement on the continent, says Levy Ndou, lecturer in political science and public policy at the University of Venda.

“The ANC should decide whether they want to continue to protect those implicated in corrupt activities or do something about them,” said Ndou.

The drawn-out episode has also led to more questions about Zuma’s legacy, both as deputy president and later as president. The commission recommended that he face corruption and racketeering charges for his role as a willing enabler at Transnet, and over his links to the Guptas.

The former president last year was sentenced to 15 months in prison for contempt of court for failing to appear before the state capture inquiry. His sentencing led to days of riots in which property worth millions of dollars was destroyed and at least six people were killed.

“We will remember him for corruption and nine wasted years that took us backwards,” said van Heerden. “The report demonstrates that from day one, he took the country downhill,” he added.

‘Confidence of the people’
On his part, Ramaphosa has taken the stand twice to give his version of events, in his capacity as Zuma’s then-deputy. The president also told the nation that he would take some time to study the report, give recommendations and then issue a response from his office.

But analysts say Ramaphosa may know a lot more than what he has revealed so far and ought to be swift with his next line of action.

“I think the president is aware of this and hopefully he will dispel this and will act decisively, firing those implicated; arresting and getting some of the money back into state coffers,” van Heerden said. “So let’s see what he will do with explosive evidence placed in his lap … if he does not act, he will lose the confidence of the people.”

Around the country, confidence in the ability of Public Protector Busisiwe Mkhwebane to see out justice is also low, compared with her predecessor Madonsela. Mkhwebane, who is facing criminal charges of perjury, has lost several lawsuits for “acting in bad faith”.

For Opposition Leader and Democratic Alliance leader John Steenhuisen, the moment of truth has arrived. “Will [Ramaphosa] hold his own political party and his numerous political allies implicated in corruption by the report to account? Will he put the interests of justice and of South Africans before or all else, or will he once again sacrifice South Africa’s needs at the altar of ANC unity?” he asked.

Ramaphosa has until next month – when the final part of the report is released – to consider his next moves.