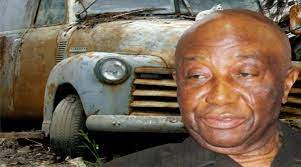 On Wednesday, Joseph Boakai announced he planned to pull his Unity Party (UP) out of the Collaborating Political Parties (CPP). This appears to be the final nail in the coffin for not only the opposition coalition, but also the presidential ambitions of the former vice-president himself.

As it stands now, the electoral math for Boakai in the 2023 elections is hardly better than in 2017, when he suffered an embarrassing blowout defeat at the hands of George Weah and the CDC, only winning a majority on his home turf, Lofa County.

Boakai’s trajectory since becoming rotating leader of the CPP in September has been a tortured one. Almost immediately after taking the reigns from Sen Nyonblee Karnga-Lawrence to head the opposition coalition, Benoni Urey – supposedly a strong ally of Boakai – launched accusations against fellow CPP member Alexander Cummings. Urey first claimed that Cummings altered the Framework Document, and after this proved to be a lie after lawyers looked into the issue, then began accusing Cummings of forging signatures on the document.

Throughout this crisis within the CPP, Boakai remained painfully, awkwardly silent. Even after Sen Nyonblee said she supported Urey’s unfounded claims and Cummings went on the offensive defending his name and reputation, Boakai declined to forcefully state his position on the issue. As Front Page Africa wrote back in October, “Many had hoped that the former Vice President, now the standard bearer of the Unity Party, would have used his experience and wisdom to quite the down the noise within the CPP. Unfortunately, at least from the public’s perception, that was not the case and things went helter-skelter.”

Unfortunately for Liberia’s political opposition, the only individual capable of keeping the CPP together once Urey launched his offensive against Cummings was Boakai himself. Joe Boakai failed this test. Perhaps Boakai was left unconvinced by Urey’s attack on Cummings last fall, but kept quiet to avoid criticizing his political supporter? Or did Boakai think he could benefit politically from the chaos and collapse of the CPP? If so, it appears the Unity Party leader has made a disastrous miscalculation.

It is difficult to see the collapse of the CPP as anything other than a major setback for Boakai and his presidential ambitions, seeming to benefit just about everyone – not least George Weah –  except the former Vice President ahead of next year’s elections. As John Ballout, UP member and former Maryland Senator remarked, “If the Unity Party breaks away and goes on its own, where will it be going to? You’ll be going to exactly where you were when you lost the election in 2017… Nothing has changed.”

Boakai went from senior member of an opposition coalition that, if it held together, was likely to defeat George Weah in the 2023 election. Now Boakai finds himself isolated, with the likes of the unsavory and unelectable Benoni Urey making up the core of his remaining political supporters. It is a bitter irony that Urey’s antics are what brought the former Vice-President into this position in the first place.

Maybe Alexander Cummings had a point in 2017 when he remarked – mocking Boakai’s race car theme of his campaign: “If you park a race car in the garage for 12 years and it doesn’t move, it becomes obsolete.”