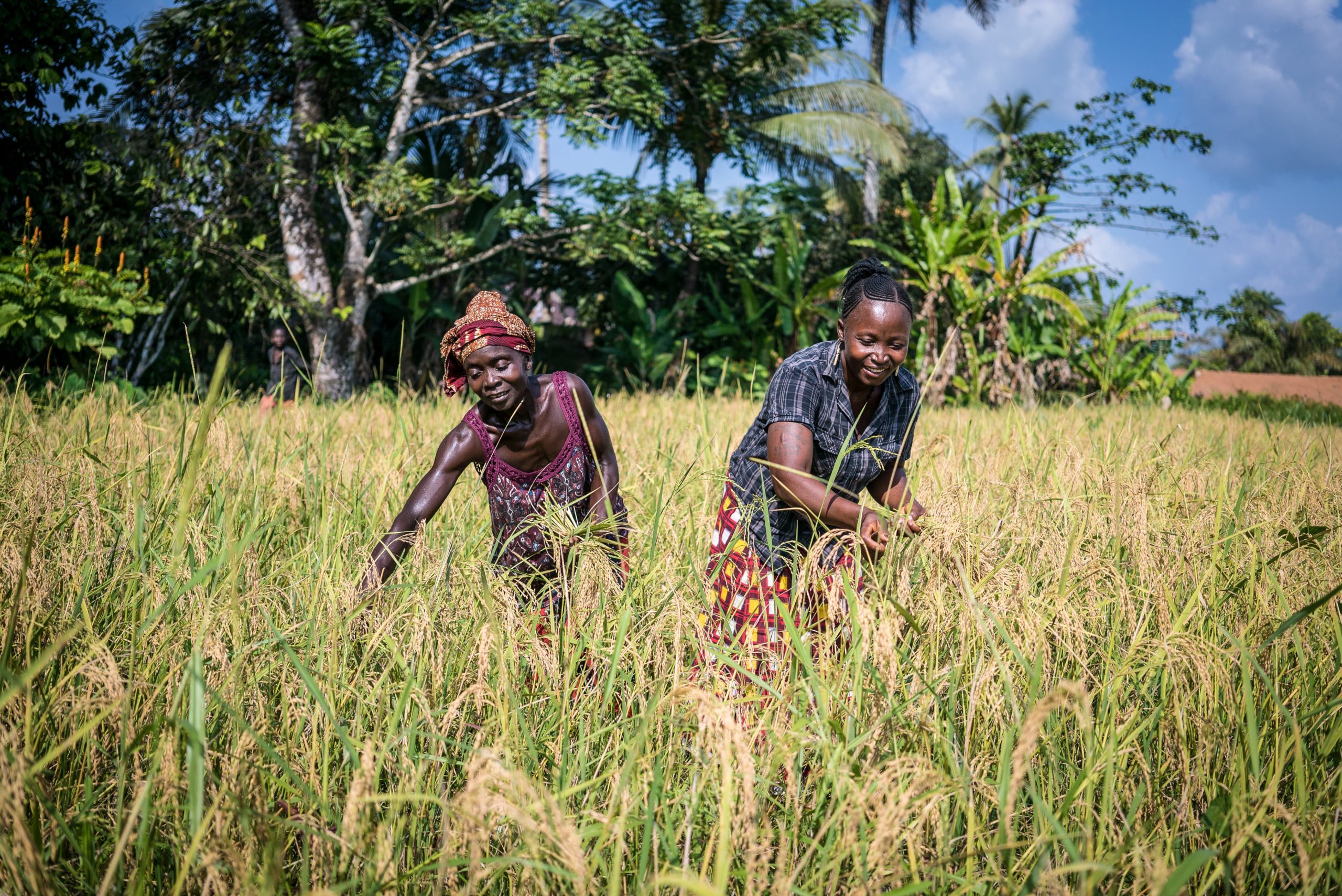 Sierra Leone – Not long after daybreak in Matagelema, a village in the south of Sierra Leone’s Moyamba District, a jubilant chorus rings out from a stretch of a once-neglected swamp surrounded by tropical forest.

“When we are ploughing, people are getting jealous,” dozens of women farmers sing gleefully, ankle-deep in mud in a sprawling paddy field.

Through their backbreaking work – carving out rice paddies from thickly-forested swamp land – peace and prosperity are gradually coming to the conflict-ridden corner of West Africa.

“We cut the trees by hand. It was tough, there was pain,” she says. “But it was an opportunity for us and we have used it to better our lives.”

For many years, these women tilled the region’s uplands, mostly cultivating the root vegetable cassava.

But conflict regularly flared up between farmers and miners, who are extracting Moyamba’s rich deposits of rutile, a mineral used to make a bright white colour in ceramics and paint.

The struggle for resources led to violent tensions, with protests against mining including roadblocks by angry locals and even a local chief’s home being burned.

“We weren’t getting benefits from mining,” adds Achion. “The miners’ dredging created water pools in our fields, damaging the crop. They relieved us of our land.”

Born and raised in Matagelema, Achion – like many of the women – has also dealt with a lot of adversity besides conflict with mining companies.

Forced to drop out of school to support her farmer parents, Achion later lost her husband to Ebola, the deadly hemorrhagic fever that swept across the region in 2014.

“I wanted us [women] to come together,” she says. “Some don’t have fathers, mothers, brothers, husbands. Many of us are widows, because of Ebola and war.”

In 2020, about 150 women in Matagelema formed a women’s association and moved to work on inland valley swamps, an overlooked yet abundant ecosystem that has the potential for very high agricultural yields.

Sierra Leone relies heavily on agriculture, which employs more than 60 percent of the population (PDF) and accounts for almost half of the gross domestic product (GDP). Women represent about 70 percent of Sierra Leone’s agricultural workforce.

But farmers typically rely on shifting, upland agriculture, which results in low yields, food loss and environmental damage. Earlier, farmers in Matagelema would cut down trees without de-stumping them, burn the land, and “broadcast” the seeds in a scattershot method.

The flaws in that agricultural system have contributed to a shortage of food in Sierra Leone – worsened by inflation, COVID-19 pandemic and climate change – grow from 49 percent in 2010 to only 57 percent in 2020, according to Food Security and Nutrition Working Group data.

But the inland swamps are already proving much more effective.

Sierra Leone is naturally endowed with an estimated 260,000 hectares (642,500 acres) of inland valley swamps, which when irrigated can be harvested three times a year for rice as well as legumes, maize, peanut and okra. Crucially, given the growing amount of drought and crop failure brought on by climate change, the swamps have a year-round water supply.

According to the Ministry of Agriculture, the yield in Matagelema’s swamps is 2 metric tonnes of rice per hectare – more than triple the 0.6 metric tonnes average for uplands.

“It’s challenging but sustainable and they produce much more food,” says Al Haji Juana Brima, a front-line extension worker for the Ministry of Agriculture.

In the Matagelema association’s first meeting, the women agreed to contribute 5,000 leones ($0.44) each to register with the National Farmers’ Federation. They further invested 10,000 leones ($0.88) each to buy seeds and fertilisers to cultivate the 10 hectares (25 acres) of swamps that the group secured. All income is divided equally and the women have already built a community storage warehouse with the proceeds.

Mamie Feika, a 39-year-old divorcee with five children, says the harvests have allowed her to buy school books and uniforms.

“There’s a big improvement,” she says. “This can let us uplift ourselves. The labour is hard work, but it’s joyful being together. That’s the beauty of it.”