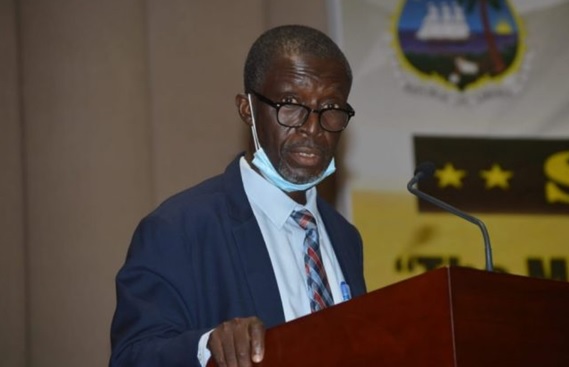 MONROVIA, LIBERIA-The Minister of State for Presidential Affairs Nathanial F. McGill in recent weeks has come under an avalanche of political pressure from Cllr. Tiawan Saye Gongole, a presidential candidate for the 2023 elections for what is described in Liberian political circle as “McGill playing fast and loose with the Liberian people resources.”

The avalanche of political pressure from Cllr. Gongole concerns recent reports that the Minister of State for Presidential Affairs has spent about L$170 million as “political gifts” to four counties. The huge sums of Liberian dollars gifted under “scholarships” specifically target vote-rich counties ( Bong, Grand Bassa, Nimba, and Margibi) but leaving out Lofa which is Unity Party (UP) standard-bearer Joseph N. Boakai political voting block.

Cllr. Tiawan Gongloe who is the immediate former president of the Liberia National Bar Association (LNBA) termed Minister McGill’s “gifting affairs” as an act of vote-buying and democratic, free expression suppression ahead of the country’s elections in 2023. In his position on the matter, Cllr. Gongloe called on the U.S. Administration to sanction Minister Nathaniel McGill and his enablers for trying to suppress democracy by spending millions of already limited Liberian financial resources on buying voters for President George Weah ahead of the 2023 general and presidential elections.

Cllr. Gongloe, detailed that Minister McGill gave LRD 50 million to Nimba, 50 million to Grand Bassa, 50 million dollars to Margibi, and 20 million to Bong. Based on these details he went on to say, “We are calling on the U.S. government to go beyond the primary sanctioning of Senator Prince Y. Johnson as stated in the sanction statement” that one of the reasons for the sanction against Senator Johnson was his involvement in diminishing Liberia’s democracy through the selling and coercing of votes. He also went on to point out that in order for the market of selling votes to be successful, there has to be the demand side”.

The Cllr. Gongloe stated that although he cannot state how much Minister McGill earns per month, he feels the “scholarship shows reckless disregard for the feelings of the Liberian people”, who are having a difficult time most especially through the pandemic, poverty, and the worsening economic hardship in the country.

The funds toward the scholarship project, according to him, have been obtained through corrupt accounting, so it is necessary that Minister McGill and others are sanctioned as a measure for curtailing “such habit that undermines the country’s democracy.”

However, he notes that these transaction goes on to violate and subvert democratic principles. Thus, votes buyers, too, should be sanctioned.

According to Cllr. Gongloe “Minister McGill is under legal obligation as a public servant to show genuine sensitivity toward transparency and accountability.

He observes that the issue of vote-buying and coercion for votes is a dangerous new aspect of corruption in Liberia, the other, he stated is legislative bribery.

Other opposition leaders within the Collaborating Political Parties (CPP) have accused Minister McGill of playing the role of disruptor of Liberia’s democracy and a violator of accountability laws and financial best practice regulations in the country.