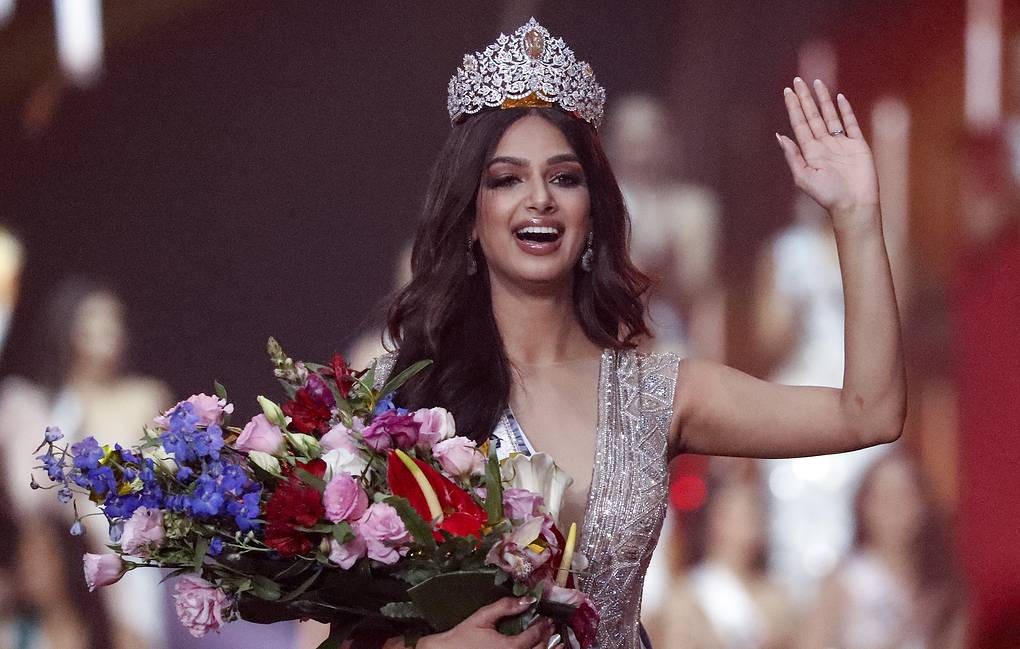 On December 13, Miss Universe crowned its 70th winner: Miss India Harnaaz Kaur Sandhu, who ended the country’s 21-year-crown-drought at the international competition. Held in Eilat, Israel, the young model edged out Paraguay’s Nadia Ferreira and South Africa’s Lalela Mswane to win the coveted title on Monday. She wore a silver gown with beaded embellishment and plunging neckline as her finale ensemble. The dress was designed by Indian designer Saisha Shinde – who came out as a transwoman earlier this year.

So, what else do we know about the 21-year-old beauty queen?

She’s no stranger to pageantry

Despite her young age, Sandhu is actually a pro at beauty pageants. As informed by her brother, Harnoor, the Miss Universe 2021 winner always had a passion for modelling, acting and dance from an early age, reports Times of India. Sandhu entered her first beauty pageant as a teenager, winning Miss Chandigarh in 2017 and Miss Max Emerging Star India in 2018, before being crowned as Femina Miss India Punjab in 2019 and Miss Diva in 2021 respectively.

After her historic triumph, the Sandhu family told Tribune India the following: “She is very confident, down to earth and belongs to a middle class family. Beauty pageants, glamour industry always excited her and she was focused on her goal.”

As quoted from her Miss Universe official profile, Sandhu looks up to her mother for inspiration. While her father is a property agent, her mum Ruby Sandhu is a successful gynaecologist “who broke generations of patriarchy”.

Born in the Kohali village in Gurdaspur district, Punjab, she grew up working with her mum at health camps that help address issues on women’s health and menstrual hygiene. She is also a strong advocate for women’s empowerment, particularly their constitutional rights to education, careers and their freedom of choice. Before her win, the yoga enthusiast earned her bachelor’s degree in information technology and was pursuing her master’s in public administration.

An aspiring actress, Sandhu has also appeared in two Punjabi films (Bai Ji Kuttange and Yaara Diyan Poo Baran) before winning the coveted title. On her official Miss Universe profile, she shared that Priyanka Chopra-Jonas – another former pageant queen, crowned Miss World in 2000 – is her favourite actor and she “draws inspiration from her body of work”.

After her win, Chopra-Jonas herself congratulated the young diva on Twitter writing, “Congratulations @HarnaazSandhu03 … bringing the crown home after 21 years!”
Sandhu’s crown predecessor Lara Dutta, who won the pageant in 2000, also took to Twitter and wrote, “Welcome to the club!!! We’ve waited 21 long years for this!!!”

She is the third Indian woman to win Miss Universe

Sandhu became the third representative from India to win the Miss Universe title, after Sushmita Sen paved the way back in 1994 and Lara Dutta was crowned in 2000. During the competition, the five-foot-nine (1.75-metre) model wowed the audience with her performance during the swimsuit and evening gown competitions, and solidified her place in the final question and answer part of the pageant in which she was asked about climate change.

After her glorious win, throngs of Bollywood celebrities shared their well-wishes on Instagram, including Kareena Kapoor, Neha Dhupia, Kangana Ranaut and Sushmita Sen.

Heavy is the cash prize! As well as the US$250,000 prize, the coveted title also comes with different sponsorships, brand deals and endorsement perks, reports Hindustan Times. Sandhu will also relocate to New York City to stay at the Miss Universe flat for an entire year with all expenses paid. While there she’ll be obliged to attend exclusive charities, balls and galas as part of her new gig.
According to an interview with the Associated Press, Sandhu revealed one of the causes she’s passionate about is menstrual hygiene awareness.