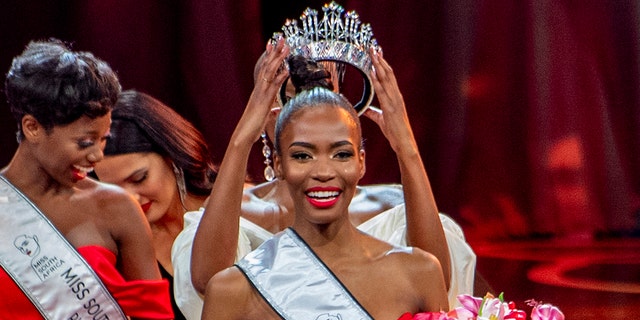 JOHANNESBURG -Controversy is swirling around the Miss South Africa beauty pageant, as the government has withdrawn its support for the event because of its plans to participate in the Miss Universe 2021 contest which is to be held in Israel in December.

The current Miss South Africa, Lalela Mswane, appears to be caught in an uncomfortable spot because of the furor.

The government announced this week that it has withdrawn its backing after it failed to persuade the Miss South Africa pageant organizers to pull out of the event to protest Israel’s policies toward the Palestinians.

Earlier this year, the New York-based Human Rights Watch and the Israeli rights group B’Tselem separately said those policies amount to apartheid, drawing comparisons with the brutal system of racial discrimination in South Africa that ended in 1994. Israel rejected those allegations, accusing both groups of bias.

The government said it refuses to associate itself with the 70th annual Miss Universe pageant to be held in Eilat, Israel as “the atrocities committed by Israel against Palestinians are well documented,” Minister of Arts, Sport and Culture Nathi Mthethwa said in a statement earlier this week.

The government’s action prompted an angry response from the South African Jewish Board of Deputies.

“South Africa has diplomatic ties and extensive commercial trade relations with Israel. It engages in events such as this one, such as hosting the Israeli Davis Cup team in 2018,” said Wendy Kahn, national director of the board, in a statement. “The way we influence situations is to engage, not to withdraw.”

The Jewish board accused Mthethwa of politicizing the beauty contest while at the same time failing to address the challenges faced by South African artists during the COVID-19 lockdown.

South Africa’s ruling party, the African National Congress, has supported calls for Mswane to boycott Miss Universe and warned that “the damage to her reputation will far exceed any glamour that may arise.”

South Africa’s leftist opposition party, the Economic Freedom Fighters, and other pro-Palestinian organizations, including the labor federation COSATU, have also raised public pressure on the Miss South Africa organizers to withdraw from the Miss Universe event in Israel.

So far Mswane, a 24-year-old law graduate who won the Miss South Africa contest last month, has remained silent on whether or not she will participate in the pageant in Israel.

This is not the first time that South Africa has been the center of political disputes that affect beauty contests. As international opposition grew to the country’s racist apartheid regime in the 1980s, South Africa was banned from competing in both the Miss World and Miss Universe events. It was readmitted after the release of Nelson Mandela and its first democratic elections.

In 2018, South African DJ Black Coffee faced a backlash for performing in Tel Aviv, ignoring calls from various sectors to withdraw from the event in solidarity with the Palestinians.

Next month’s pageant in Israel is in the spotlight because of calls to boycott the event as a show of solidarity with the Palestinians. Over the past 54 years, Israel has systematically deepened its grip on occupied lands sought for a Palestinian state by building settlements. The last meaningful Israeli-Palestinian negotiations on a partition deal were held more than a decade ago, and Israel’s current prime minister is opposed to the idea of Palestinian statehood.

The BDS movement promotes boycotts, divestment and sanctions of Israeli institutions and businesses in what it says is a nonviolent campaign for Palestinian rights modeled on a similar boycott movement decades ago against South African apartheid.

Israel says the campaign is an effort to delegitimize and even destroy the country, and claims its motives are antisemitic. BDS leaders deny allegations of antisemitism, saying their campaign is against Israeli policies.

Read the Associated Press for more