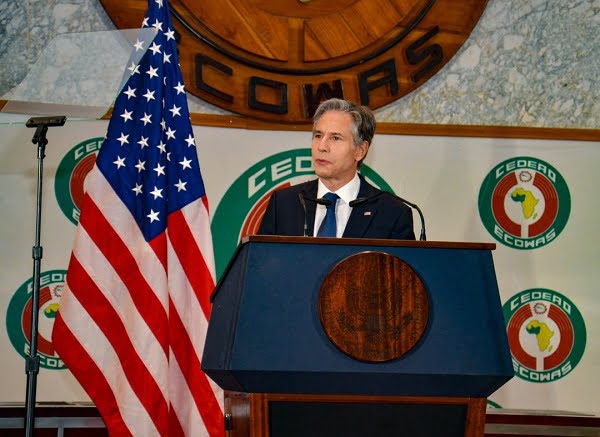 Africa, which needs billions of dollars a year for roads, railways, dams and power, has over the last decade received funding from China, which generally does not tie the money to political or rights-related conditions.

In a speech laying out the Biden administration’s policy approach to Africa, Blinken said it was time to stop treating the continent as a subject of geopolitics and see it as a major player on its own. He appealed to African leaders to guard against rising extremism, authoritarianism and corruption.

Without mentioning China by name, Blinken said Washington would be transparent and sustainable.

“Too often, international infrastructure deals are opaque, coercive. They burden countries with unmanageable debt. They’re environmentally destructive. They don’t always benefit the people who actually live there. We will do things differently,” Blinken said during a visit to Nigeria.

The Biden administration has been criticised by some as inattentive to Africa: a common complaint about U.S. foreign policy but one that rings louder now China has deepened its political and economic roots on the continent.

The Biden administration has struck a different tone from the era of former President Donald Trump, who disparaged some African nations and barred travel from six of them.

Washington has rescinded that ban and dispatched diplomats to Ethiopia and Sudan to try to resolve conflicts. But complaints persist that the United States views Africa primarily in a negative light compared to China which talks of partnership.

“The U.S. needs to drop the old posture of viewing Africa as just a problem to be solved,” said Murithi Mutiga, project director for the Horn of Africa for International Crisis Group.

Blinken’s trip comes days after a judicial panel issued a damning report into the shooting by Nigerian security forces of unarmed demonstrators during anti-police brutality protests in Lagos last year.

Some Nigerians have been quick to note that the United States has been more reticent about criticizing their government – an ally in the fight against Islamist militants – than chiding Ethiopia or Sudan.

But Blinken said on Thursday authorities should hold to account Nigerian security forces accused of abuses.

Blinken warned that authoritarianism was on the rise around the world with internet freedom not guaranteed.

“Technology is being used to silence dissent and prosecute citizens. And democracies must answer the call to fight back against disinformation,” he said.

The United States will continue to help Africa fight conflict and extremism, but not everything could be solved with more or better-equipped armed forces, as this sometimes led to violation of rights, contributing to grievances and perpetuating cycles of violence, Blinken said.