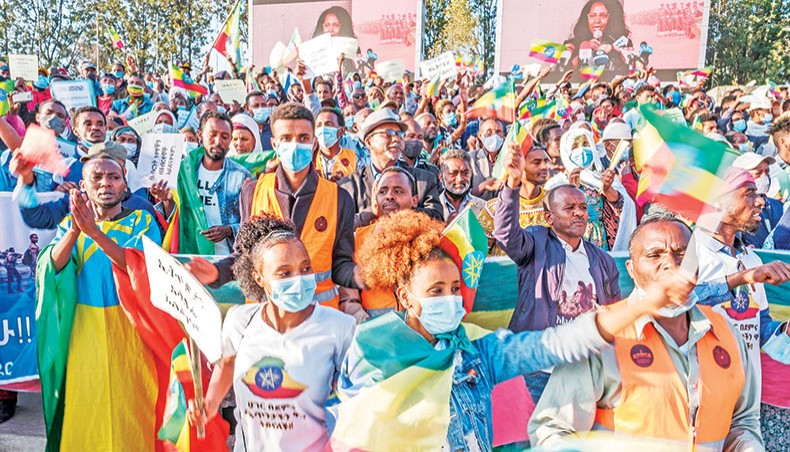 Some demonstrators denounced the United States, one of the foreign powers that has called for a ceasefire to a year-long war, which has intensified amid advances by rebellious forces in the past week.

The U.N. Security Council, the African Union, and Kenya and Uganda have also called for a ceasefire in the conflict that has killed thousands of people.

Canada, calling the situation in Ethiopia “rapidly evolving and deteriorating”, has withdrawn the families of its embassy staff and non-essential Canadian employees, the foreign ministry said on Sunday. Its embassy remains open in the capital.

Abiy’s government, which has pledged to keep fighting, said on Friday it had a responsibility to secure the country and urged foreign powers to stand with Ethiopia’s democracy.

The state-appointed Ethiopian Human Rights Commission said on Sunday the authorities appeared to be using a state of emergency declared on Tuesday to arrest people based on ethnic identity.

“In some police stations, the families are denied access to the detainees, and they can’t deliver food and clothing. On top of that, elders and mothers with children are among the detainees,” the commission said in a statement.

The government spokesperson Legesse Tulu and federal police spokesperson Jeylan Abdi did not immediately respond to Reuters requests for comment.

Police spokesperson Fasika Fante denied on Thursday that arrests were ethnically motivated, saying those detained “directly or indirectly” backed the Tigray People’s Liberation Front (TPLF), an outlawed party that was once part of Ethiopia’s government and is now battling federal forces.

Some of those gathered for the rally in Meskel Square in Addis Ababa draped themselves in the national flag.

“Shame on you USA,” read one placard, while another said the United States should stop “sucking Ethiopia’s blood”.

‘THEY WILL NEVER SUCCEED’

U.S. President Joe Biden’s administration on Tuesday accused Ethiopia of “gross violations” of human rights and said it planned to remove the country from a U.S. trade pact.

The conflict in the north of the country started a year ago when forces loyal to the TPLF seized military bases in the Tigray region. In response, Abiy sent troops, who initially drove the TPLF out of the regional capital, Mekelle, but have faced a sharp reversal since June this year.

Some demonstrators voiced anger over a U.S. call for the government and TPLF to negotiate.

“They want to destroy our country like they did to Afghanistan. They will never succeed, we are Ethiopians,” said 37-year-old Tigist Lemma.

The conflict has killed thousands of people, forced more than 2 million from their homes and left 400,000 people in Tigray facing famine.