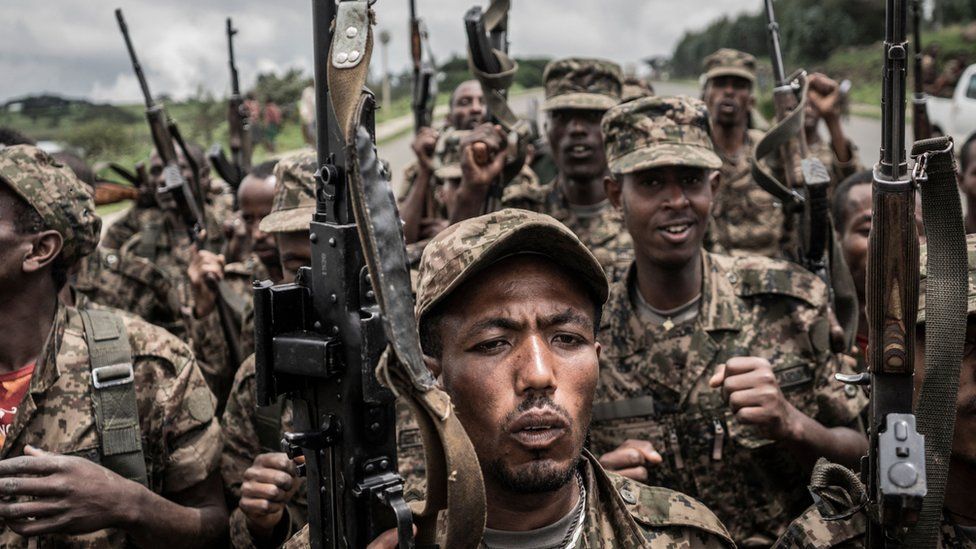 A UN joint investigation into alleged atrocities in Ethiopia found all sides committed grave abuses that may amount to crimes against humanity and war crimes in the yearlong war in the Tigray region.

The report, a collaboration by the UN human rights office with the government-created Ethiopian Human Rights Commission (EHRC), was released on Wednesday as the country enters a new state of emergency with rival Tigray forces threatening to advance on the capital, Addis Ababa.

More than 1,300 rapes were reported to authorities, with many more likely to have been unreported.

Michelle Bachelet, the UN high commissioner for human rights, said the Tigray conflict has been marked by “extreme brutality”.

“Civilians in Tigray have been subjected to brutal violence and suffering,” Bachelet said in a press conference on Wednesday.

“The joint investigation team has covered numerous violations and abuses including unlawful killings and extrajudicial executions, torture, sexual and gender-based violence, violations against refugees and forced displacement of civilians.”

“It is vital that all parties heed the repeated calls to end hostilities,” Bachelet said.

The probe found several Ethiopian military camps were used to torture captured Tigray forces or civilians suspected of supporting them. Others were detained in “secret locations” and military camps across the country, with arbitrary detentions in many cases.

Tigray forces detained some ethnic Amhara civilians in western Tigray in the early days of the war on suspicion of supporting the military and in some cases tortured them, the report found.

Ethiopian Prime Minister Abiy Ahmed said the report dispelled false accusations against his government, including the deliberate denial of humanitarian assistance to the civilian population in Tigray.

The UN findings “clearly established the claim of genocide as false and utterly lacking of any factual basis,” Abiy said in a statement posted on his Twitter account.

Ethiopian authorities have launched their own investigation into the crimes, with some perpetrators already reportedly convicted.

Bachelet has expressed concern over a “troubling lack of transparency” surrounding the investigation conducted by Ethiopian national institutions.

“A key concern of our report is accountability,” the UN official said, adding that an independent investigative mechanism should be considered if national authorities fail to deliver justice to the victims.

The UN human rights office in Geneva on Tuesday said the Ethiopian government had tried to limit the joint investigation.

UN officials told The Associated Press news agency the collaboration with the government-created EHRC was a precondition for the team to gain access to the war-torn region. Yet, UN officials were unable to visit some of the deadliest sites of the war, including the city of Axum, because of security and other obstacles.

The joint investigation mentioned a number of obstacles, including the Ethiopian government’s failure to release satellite phones procured for the investigation.

Independent journalist Samuel Getachew told Al Jazeera the investigation confirmed the accounts that reporters on the ground had been hearing from the very start of the conflict in November 2020.

“This is an independent investigation, this is the moment we had been waiting for,” Getachew said. “Ethiopia needs to address what really happened without making any compromise.”

Ethiopia’s cabinet declared on Tuesday a six-month state of emergency that could further aggravate the humanitarian condition in several parts of the country.

Patrick Youssef, regional director of the International Committee of the Red Cross (ICRC) in Africa, told Al Jazeera that the situation in Ethiopia is “extremely dire.”

“We continue operating within the limits of a rapidly evolving situation and we are currently assessing the impact of the nationwide state of emergency,” Youssef said.

“As Tigray and other regions remain sealed off, the dire humanitarian conditions are further aggravated.”

Youssef said telephone networks are down in the embattled areas, making it hard for the organisation to assess the needs on the ground.