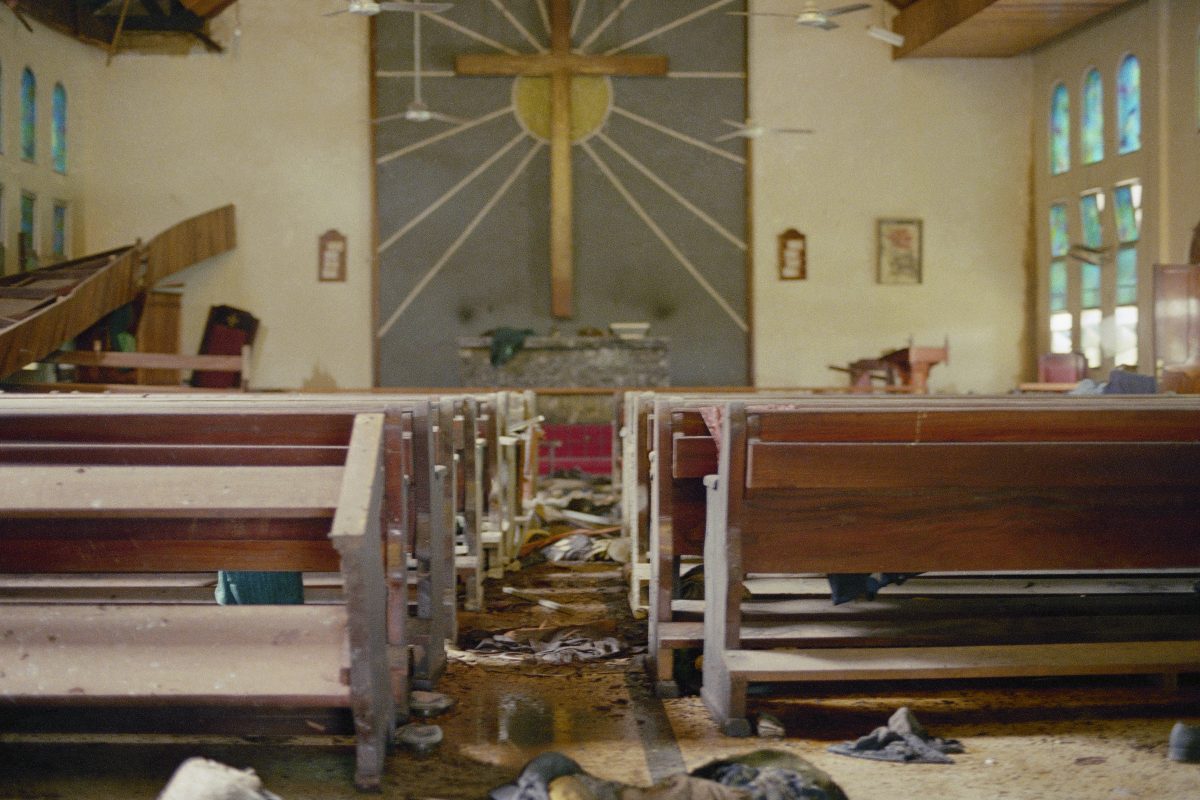 Monrovia, Liberia-It was one of the most brutal massacres of the Liberian civil war. In April 1990, soldiers loyal to embattled President Samuel Doe shot and hacked to death 600 men, women, children, and babies seeking refuge in a church. It would become known as the Lutheran Church massacre and brought international attention to the Liberian conflict that was unfolding. The massacre is blamed for a cascade of revenge killings that fueled 14-years of civil carnage that destroyed the country and left 250,000 people dead.

Like many of the other war crimes committed during the conflict that ravaged the West African nation for more than 14 years, no one was held accountable. That changed in a Philadelphia court on Friday when Judge Petrese B. Tucker made a surprise ruling that held Moses Thomas, a former top commander with the elite Special Anti-Terrorist Unit of Doe’s military forces living in the U.S. city, civilly liable for the massacre.

Ruling in the civil case, brought by four Liberian survivors, U.S. District Judge Petrese B. Tucker concluded that the plaintiffs should be allowed to secure damages from Moses Thomas, 67, who had been living in Philadelphia since fleeing Liberia in 2000.

U.S. District Judge Petrese B. Tucker, wrote in his ruling, “He is directly liable for the wrongful acts during the massacre.” “He intentionally directed an attack on a building dedicated to religion, personally directed an attack on civilians and committed the crime against humanity of persecution. He oversaw the events and only declared an end to the shooting when he understood the occupants of the church to have been all killed.”

Judge Tucker said the plaintiffs lost close relatives and suffered “serious, prolonged physical and mental harms as a result of the massacre.”

Justice activists Global Justice and Research Project and the Center for Justice and Accountability (CJA) working with US law firms Debevoise & Plimpton and Blank Rome, who brought the suit against Thomas at the district court on behalf of the victims of the massacre hailed the judgment. “For more than two decades, Liberians have known that their government perpetrated the Lutheran Church Massacre,” said Hassan Bility of Global Justice Research Project. “The decision finds conclusive evidence of government responsibility for the massacre, as well as Thomas’ individual role in it.” “This judgment is a key step towards achieving not only for our clients but also for other survivors and victims of Liberia’s civil wars,” said Nushin Sarkarati, senior staff attorney at CJA. “The court’s decision establishes the historical record for the Lutheran Church Massacre, recognizes the attack was a war crime and a crime against humanity and is the first to hold a member of the government’s armed forces responsible for war-time atrocities.

For more than two decades, Liberians have known that their government perpetrated the Lutheran Church Massacre

Moses Thomas Reaction after the verdict
Moses, who moved back to Liberia voluntarily in 2020, angrily rejected the verdict when reached by phone. “It’s a stupid judgment. It’s an abuse of justice. What is the evidence? It’s nonsense,” Thomas said. “I know I was not part of the Lutheran Church massacre. I did not go. Even the Bishop, the Lutheran board, everybody knows who committed that act. So, for them to come to say they rendered judgment against me, finding scapegoat, it’s nonsense. I don’t even want to want to dignify that. It’s stupidity. It’s an abuse of justice.”

when asked who may have ordered the attack, Moses said it was a stupid question posed to him, wondering why we didn’t ask the NSA, police, and military at the time to look into their files for the massacre.

Thomas was sued by four unnamed victims of his atrocities under the U.S. 1992 federal Torture Victim Preventforn act.
He was found liable for the killings after his lawyer failed to respond to the claims against him by the victims’ lawyers. Prosecutors were unable to find a criminal statute with which to prosecute Thomas. Federal human rights violation laws did not come into place until after 1990. And there was no evidence Thomas committed immigration fraud, the violation for which Mohammed Jabbateh and Thomas Jucontee Woewiyu were convicted in Pennsylvania in 2017 and 2019.

Next Step for the Case

The next step will be a damages hearing by a different judge to determine how much Thomas must pay. If he has assets in the U.S. they can be used to enforce the judgment. The plaintiffs can also try to enforce the judgment in Liberia. Thomas said he would not be paying. “I don’t have a f……cent to pay. It’s nonsense. It’s stupidity,” he said.
But activists say responsibility now lies with the Liberian government to pursue the case.

“Now that Thomas is back in Liberia, the Liberian government must investigate and prosecute him for this crime, and any others,” said Mr. Bility. “Until there is domestic accountability in Liberia, survivors and victims cannot live in peace.”

“Let them go to the Liberian government and let them prosecute me for Lutheran Church. I say it’s stupidity. I don’t even want to talk about it. If they have evidence, let them produce the evidence,” Thomas says.

To prosecute Thomas, Liberian prosecutors would have to build their own case though they would have access to the evidence presented in the Philadelphia case. Justice Minister, Musa Dean did not respond to requests for comment on whether the government would pursue a case against Thomas or whether they would support the victim’s efforts to receive damages. Given the Weah administration’s resistance to establishing a war crimes court in Liberia, a case against Thomas does not seem likely.