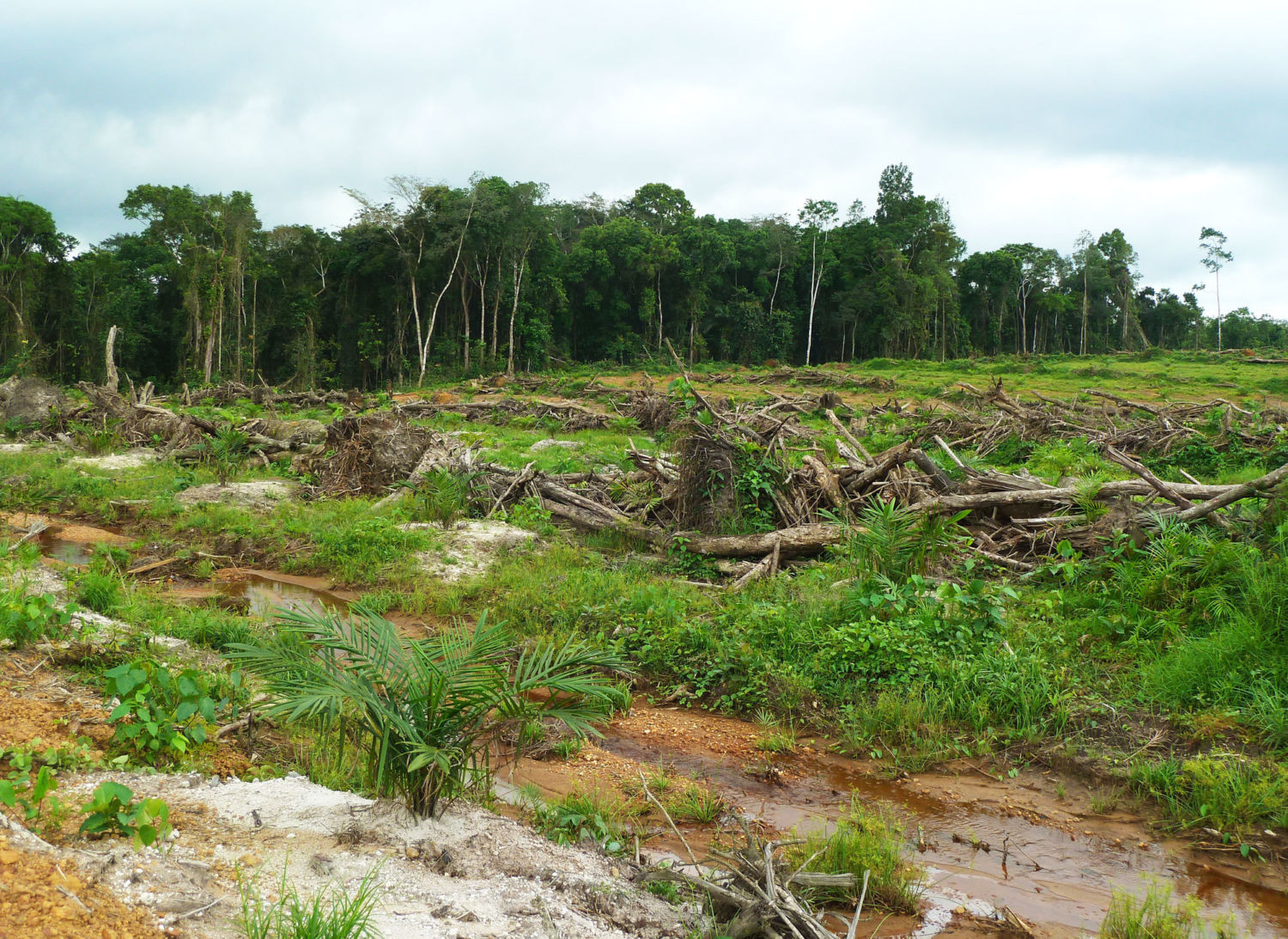 In the evergreen West African country of Liberia, a subsidiary of the world’s second-largest palm oil company has admitted to destroying forests and violating the rights of local people who are struggling with the effects of poverty, while its parent company is among the industry’s leaders in investor ratings for environmental and social policies. Golden Agri Resources Ltd. acknowledged in February that its Golden Veroleum Liberia (GVL) unit hadn’t done enough to compensate local residents for business practices that included razing part of one of the planet’s richest biodiversity regions.

Among the company’s shareholders is BlackRock Inc., the world’s largest asset manager, whose chairman Larry Fink has made combatting climate change a focus for the $9.5 trillion of assets his firm manages. Part of Golden Agri’s attraction for investors is that it tops a global list of more than two dozen agricultural producers and wholesalers for its environmental efforts, and ranks fourth on social-related issues, according to data compiled by Bloomberg. And while the industry’s performance as a whole isn’t good — Golden Agri rose to the top of the environment chart with a score of only 4 out of 10 — it makes the company the best of the pack for investors that need to keep a diverse portfolio.

“This is an example of a common problem with ESG ratings,” says Andrew King, professor of management at Boston University’s Questrom School of Business, who focuses on ESG measurement and corporate sustainability.“Their inaccuracy can protect bad actors by impeding pressure for real improvement”. It also shows the difficulty investors and activists face in tracking and bringing to book wayward agricultural enterprises that often operate through units or joint ventures in remote, poor areas of the world.

The controversy surrounding Golden Veroleum surfaced three years ago when Friends of the Earth and the Sustainable Development Institute Liberia filed a complaint with the High Carbon Stock Approach, a body set up a decade ago by Golden Agri and environmental groups to develop a scientific way of evaluating tropical forests to curb deforestation and protect the rights of local people. HCSA’s members now include some of the world’s biggest food producers such as Unilever Plc and Cargill Inc.

Activists for the environmental groups had visited the area around Wiah’s Town, a ramshackle group of some 100 tin-roofed buildings strung along a red-dirt road an hour’s drive from the coast. Inhabitants say GVL promised to provide jobs and amenities such as piped water, but instead, the company cut down the forest, deprived farmers of their land and polluted the water supply.

“GVL cleared the land of the Lower Kulu people called Blogbo land without our consent,” says Russels Kumon, 67, a retired teacher who returned to Wiah’s Town a few years after his country’s second civil war ended in 2003. “The whole place has been enclaved. We are just in the enclaved area, making farming and any other things difficult for us. The land has been destroyed.”

Looking up at the palm oil mill, belching out smoke, he says the factory was built on a sacred hill, Tarhuowon, that members of the community used to climb to rectify ailments. GVL said there was no indication from local representatives that the hill was sacred when it erected the plant.
Few of the expected jobs materialized, Kumon says. Several of those who are employed in the mill and plantation complained to Bloomberg of low wages and arduous working conditions, with some saying they work seven days a week for $150 a month.

Further down the road, in the village of Butawu, 48-year-old electrician Othello Jartoe says the palm oil grower constructed just one hand pump, to be shared by more than 100 people, while he and others were laid off by the company after a year. “The minority is employed and the majority is unemployed,” he says.

The High Carbon Stock Approach has a system to investigate such complaints and in February it concluded that GVL failed to conduct a proper consent process with local communities before clearing land and setting up its operation, and hadn’t done enough to remediate the misconduct and compensate residents. HCSA said the palm oil company must halt land development until conflicts with communities are resolved, provide new biodiverse forest and adopt policies to prevent further rights violations.

But restoring rainforest biodiversity is difficult if not impossible. GVL operates in the Upper Guinean forests, which span six West African nations, from Guinea in the west to Togo in the east. Only about 20% of the original forest remains — about half of it in Liberia — and it is considered a vital carbon sink and a world biodiversity “hotspot,” with an estimated 390 terrestrial mammal species, or more than a quarter of all those in Africa.

“The region is a mosaic of forests interspersed with villages, and as such is more vulnerable to deforestation than other regions such as the Congo,” says Wannes Hubau, associate professor of tropical forest ecology at Ghent University in Belgium. “Its accessibility is hastening the switch from being a carbon sink to releasing carbon dioxide.”

GVL said in a Sept. 7 response to queries from Bloomberg that it had made “mistakes” and had stopped clearing land in February, though it denied many of the allegations leveled by local communities. Singapore-listed Golden Agri, part of the Sinar Mas Group of the billionaire Indonesian Widjaja family, said in a statement that GVL has suspended further land development and implemented some other recommended measures, including drawing up a sustainability plan. Liberian Information Minister Ledgerhood Rennie referred queries to the company and didn’t comment further.

Since the HCSA ruling, Friends of the Earth said that local communities hadn’t been consulted about the sustainability plan. GVL said it has consulted communities, investigated complaints when they were made, followed the law with regard to land acquisition and met the water quality standards of the nation’s regulator. For investors, the resolution of cases like the one in Liberia and better oversight of operations, especially in developing countries, is critical if ESG investing is to be meaningful.

A group of more than 60 indigenous leaders and activists from six continents wrote to BlackRock executives in March, saying the asset manager can’t turn a blind eye to the destruction of the Upper Guinean forests and similar ecosystems in South America and Southeast Asia. “Climate change isn’t simply a risk to be calculated in terms of profit margins,” they wrote. “It is a constant stream of risks to our peoples and our planet, which we face every day.”

BlackRock holds only about 0.7% of Golden Agri and is one of several dozen banks, investment firms and pension funds that have small stakes in the grower. Officials at Vanguard Group, which held about a 1.3% stake in Golden Agri as recently as late August, declined to comment about its investment. Blackrock said in March it will press companies on their environmental and human rights policies, and those that fail to properly oversee the use of natural resources “may face negative consequences arising from regulatory, reputational or operational risks.”

BlackRock, without disclosing the company’s name, said in a quarterly stewardship report in May that it had engaged with a Singapore-listed palm oil producer and its unit in Africa to discuss environmental and social controversies related to that business. It referenced HCSA’s February report and said it was told about remediation steps the unnamed company had taken and that it had commissioned a third party to investigate the extent of deforestation.
The palm oil company told BlackRock that HSCA is still determining the amount of compensation for the cleared forests and acknowledged the lack of progress in providing remediation to the communities. The pandemic had delayed the process and the review had resumed in March, the company told BlackRock.

“We expect the company to continue paying attention to the environmental and social controversies signaled in HSCA’s report and work towards resolving them,” BlackRock said in its report. A BlackRock spokesman declined to name the company.
At the heart of the problem for investors are the ESG scores, which are largely based on self-reported and unaudited information, lack consistency between ratings providers, and emphasize corporate policies and processes rather than impacts.

Even within those limits, many of the world’s top agricultural producers and wholesalers score poorly. Golden Agri has spent years trying to build an image as a producer of sustainable palm oil and topped the environmental list in 2019 after its rating rose to 4 from 0.9 in 2015, data compiled by Bloomberg show. The poor showing of the plantation owners and food companies shows how much more needs to be done to protect the rights of individuals and preserve some of the earth’s most important carbon stores.

About 20% of Liberia’s tree cover has vanished during the past two decades, releasing about 1 gigatonne of carbon dioxide into the atmosphere during that period, according to Global Forest Watch. That’s the equivalent of greenhouse gas emissions from 217 million passenger cars driven in one year. The World Bank forecast in July that the global economy risks losing as much $2.7 trillion a year by 2030 if countries continue to destroy biodiversity.
“If you promised to do something and you did it only halfway, to me you have done nothing,” says Jartoe in Butawu village.

The original story was published by Bloombery Africa