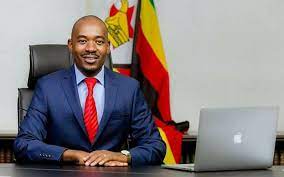 Following the democratic election of opposition leader Hakainde Hichilema in Zambia, opposition leaders in neighbouring Zimbabwe are looking on in admiration, promising to chart a similar path to restore a civil transfer of power.

The ripple effects of this message have sparked frenzied exchanges between the main opposition politician, Nelson Chamisa, and officials of the ruling Zanu-PF party, which has been in power since independence in 1980.

“Zimbabwe you are next,” the opposition leader tweeted, in a post congratulating Mr Hichilema.

President Emmerson Mnagangwa retorted: “What happened in Zambia will not happen here.”

His spokesperson even hinted that the army would not allow a transfer of power to the opposition.

But a spokesperson for Mr Chamisa’s MDC-Alliance, Fadzayi Mahere, told the BBC that Mr Hichilema’s victory showed “that the fight for democracy can be won, that people can get together to remove a dictatorship”.

Ms Mahere added that there was “no shortcut to winning”.

She said Zimbabwe’s opposition would have to emulate Mr Hichilema’s United Party for National Development (UPND) party by:

It is a message Mmusi Maimane, the former South African opposition leader and a friend of Mr Hichilema, has also been pushing.

He egged on the MDC-Alliance, saying: “Zimbabwe, the example has been set.”