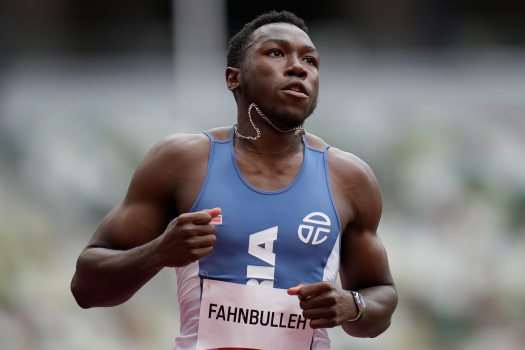 Monrovia, Liberia– Africa’s oldest independent nation Men’s 200-meter athlete Joseph Fahnbulleh is knocking on the door of history to being home Liberia’s first-ever Olympic Gold Medal in its 174 years history. In the Men’s 200m semi-finals 2 that took place August 3, 2021, the up-and-coming Liberian Star finished with a blistering sprint that clocked in a time of 19.99 seconds, finishing as the top second to automatically qualify for the final.

Joseph Fahnbullah is a native of Liberia, whose parents emigrated to the United States of America during the civil war in Liberia. He is a 2019 Hopkins graduate and he holds the Minnesota high school state records in both the 100- and 200-meter dashes, which enabled him to sprint his way into the Olympic men’s 200m final with an impressive semifinal performance.

Fahnbulleh also won the NCAA Division I men’s outdoor track championship in the 200 meters for Florida in June 2021 with a time of 19.91 seconds. In the final on Wednesday, Fahnbulleh will need to go faster to secure the gold for Liberia. Winning the Gold for Liberia is something the 19-year-old is capable of doing due to his potential and determination shown on the track. Fahnbulleh told the Pioneer Press before the games that “It is top three or I didn’t do anything at the Olympics, period, and I will try again next time in Paris. But my whole goal since nationals: top 3 or bust.”

On August 4, 2021, Fahnbulleh will be making his historic start in the men’s 200m sprint final. It will be a first for any Liberian Olympic Athlete.