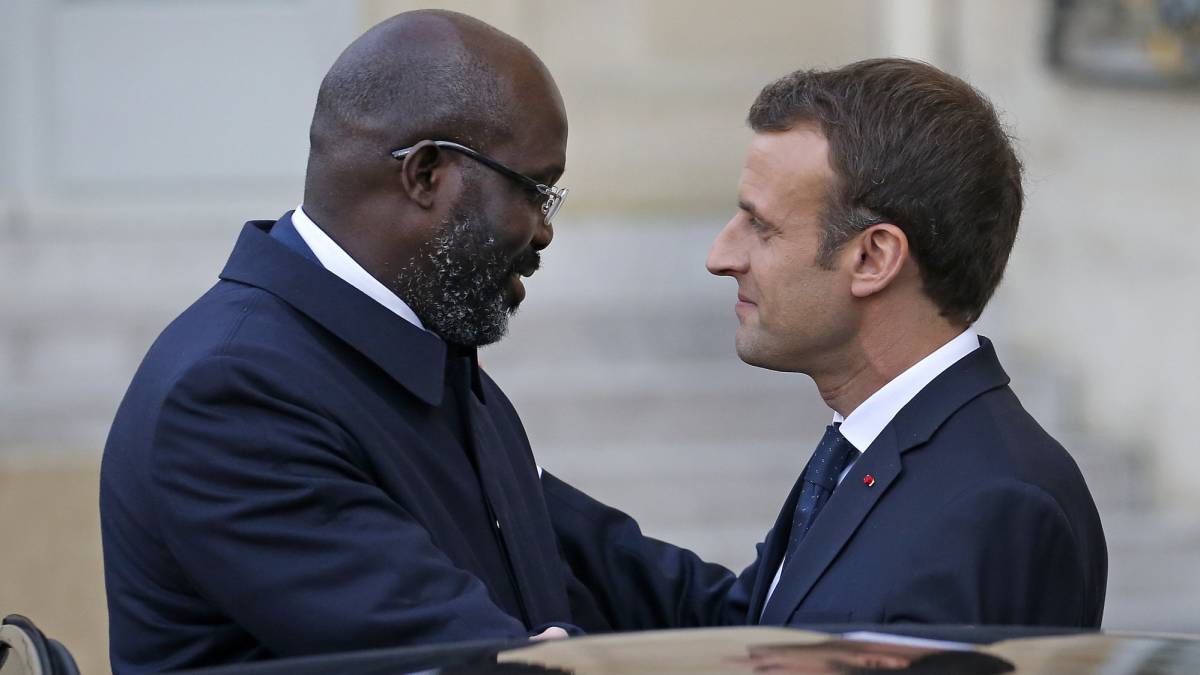 Paris, France – The President of Liberia, George Manneh Weah has met on the margins of the United Nations Generation Equality Forum (30 June – 2 July 2021) with the French President Emmanuel Macron for bilateral talks at the Élysée Palace. During their in-person meeting on Thursday, July 1, 2021, President Weah expressed profound gratitude on behalf of the Liberian people to the Government and people of the French Republic for their country’s continued support to Liberia’s development, especially in the areas of investment, security, capacity building, infrastructure development, youth development, and sports.

During the cordial talks, President Weah took the time to express appreciation for President Macron’s “gracious support” towards Liberia’s position with the International Monetary Fund (IMF) and the World Bank. He stated that President Macron’s actions have greatly contributed to the improved relationship between Liberia and the two international institutions. He informed his French counterpart that his Administration will continue to work in honest collaboration with these institutions which will “require the formulation of difficult policies” while putting in place the “necessary corrective measures and structural adjustments” for the good of the Liberian economy and people.

On the part of President Emmanuel Macron, he stated that “France will give tangible support to Liberia to improve the lives of Liberians”. The assurance of partnership brings to the forefront cordiality in friendship between the two nations since President Weah took office on 22nd January 2018.

On the issue of security, President Weah called for the strengthening of collaboration between the French Military and the Armed Forces of Liberia (AFL) in Mali. President Weah said, “it is important to note that the Liberian contingent in the Republic of Mali has now been tasked with providing Base Security for the Timbuktu outpost and, as such, more modern equipment and logistics are urgently needed.” President Macron on his part said France will support and enhance the ability of AFL to achieve its objectives in Mali. The French President also promised more logistical support and training for the AFL and further cooperation in the area of information security.

The two leaders’ discussions also covered the growing insecurity posed by piracy in the Gulf of Guinea and the need for both nations to cooperate on Anti-piracy measures. The French President on his part stated that he understands the needs of the Liberian Coast Guard and as such his government will do more in equipping and training the men and women of the Coast Guard so that they can be ready for Anti-piracy missions. President Macron also stated that the French Navy will study the option of having its Frigates participate in the fight against piracy in the Gulf of Guinea to ensure that vital maritime routes are unhindered.

During the talks, President Weah highlighted the additional support the French government has rendered to Liberia in recent months, including the funding for capacity development, sports, the resumption of international flight by Air France, the construction of a new building for Alliance Francaise Institute, and the increase in activities by French businesses and Non-Government Organizations (NGOs) in the country. On the part of President Macron, he said in addition to his country’s efforts at capacity building and youth development, additional urban projects will be undertaken by the French Development Agency totaling an initial amount of 23 million euros.

About ongoing efforts by the Weah Administration on the prevention of the spread of COVID-19 or possible variants in Liberia, President Weah thanked President Macron and the People of France for “generously providing” several ventilators and thousands of testing kits that are critical in saving Liberian lives. He informed that Liberia would need millions of additional doses of COVID-19 vaccines to assist in boosting population immunity and the fight against the spread of the deadly virus.

President Macron assured President Weah of his unwavering support towards saving Liberian lives by assisting the Weah Administration’s efforts to improve the Covid-19 situation in the country. He also informed President Weah that his country will make additional donations of “40,000 test kits and several respirators”. He said France will increase its quota to the COVAX structure while ensuring that “Liberia directly benefits and have its population vaccinated”.