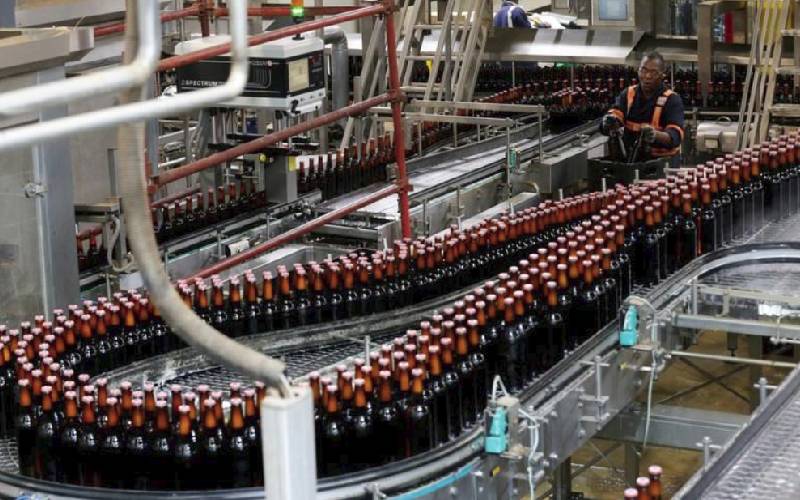 Regional beer giant East African Breweries Ltd is expected to spend at least $18.7 million to increase its stake in Serengeti Breweries, signaling the company’s growing faith in future prospects of the Tanzanian market.

EABL has been seeking to plug revenue holes punched by tight regulations and increased taxes in Kenya and Ugandan markets, where the respective governments have been seeking to regulate consumption of alcohol.

The Nairobi Securities Exchange (NSE) listed brewer, whose shares are also traded on the Dar es Salaam Stock Exchange (DSE) and the Uganda Securities Exchange (USE), last week issued a cautionary statement, advising investors that it was in the process of acquiring an additional 30 per cent shareholding in Serengeti Breweries Ltd (SBL) subject to regulatory approvals in the respective countries.

“Shareholders of EABL and the public are advised to exercise caution when dealing in shares of EABL,” said the company.

In June 2018, EABL increased its effective interest in SBL by conversion of loans receivable amounting to Ksh15.3 billion ($153 million) into equity, representing an additional 21.5 per cent shareholding.

As a result, EABL’s effective interest increased from 51 per cent to 72.5 per cent while the legal shareholding remained at 51 per cent.

The beer maker last year completed the purchase of an additional 4 per cent of the share capital of SBL for $3 million, increasing its shareholding to 55 per cent.

If the latest acquisition proposal is successful, then EABL’s legal shareholding in SBL will rise to 85 per cent, from the current 55 per cent.

Analysts at Standard Investment Bank (SIB) expect the proposed transaction to include the effective economic interest already acquired by the brewer, so that the only additional amount payable is for the acquisition of the 8.5 per cent stake needed to reach the 30 per cent target.

“We expect the proposed transaction to include the effective economic interest so that only an additional amount would be payable for the 8.5 per cent stake needed to reach the target,” SIB said in a note sent to investors.

Failure by the SBL minority shareholders to pay off the EABL loan saw EABL acquire 21.5 percent of SBL shares through debt-to-equity conversion.

SBL has turned out to be EABL’s fastest growing business in the region, having accounted for 12 per cent of the total sales in the half-year ended December 2019.

During the six months’ to December 31 2019, EABL’s net profit increased 9 per cent to Ksh7.2 billion ($72 million) from Ksh6.6 billion ($66 million) in the same period in 2018, with net sales in Tanzania growing by 19 per cent compared with 10 per cent and eight per cent in Uganda and Kenya respectively.

Net sales from this Tanzanian unit rose 26 per cent during this period, the fastest among the three units, driven by increased sales of its Serengeti Lite brand.

SBL has three processing plants spread out across Tanzania in Dar es Salaam, Mwanza and Moshi.

Although Tanzania’s overall contribution to the group’s performance is the lowest, at 13 per cent compared with its main market Kenya at 71 per cent and Uganda at 16 per cent, the market is on a positive growth path prompting EABL to increase its shareholding in SBL.

EABL acquired 51 per cent shareholding in SBL in October 2010 amid challenges with the Tanzanian Fair Competition Commission (FCC) over an alleged failure to meet the conditions of the merger, agreement including improving the performance of SBL.

In July 2015, Tanzania’s FCC threatened to cancel EABL’s 51 per cent stake in SBL. However, EABL said the matter was resolved in July 2017.

In Kenya, EABL is worried that the repeated increase in excise tax by the government is having a negative impact on its business, particularly bottled beer brands, which posted a one per cent decline in sales.

The Kenyan government has increased excise taxes on beer and spirit to 5.2 per cent and 15 per cent respectively, making these drinks out of reach for many consumers.

“While we acknowledge the need for government to grow its revenue, we are sensitive that this will impact consumers’ ability to afford our products, thus potentially drawing more of them to consumption of illicit alcohol,” said Charles Muchene, EABL chairman, in the Group’s 2019 annual report.