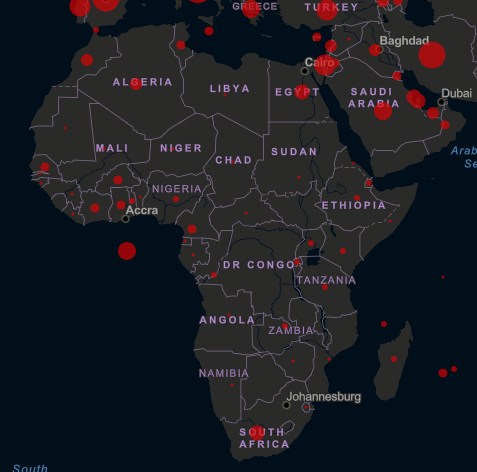 There are now more than 2,400 confirmed cases of Covid-19 across Africa and growing warnings that the pandemic will cause major challenges for the continent’s under-resourced health services.

World Health Organization officials have said the statistics are likely to significantly underestimate the true number of cases. There have been 60 reported deaths so far.

About a third of the cases are in South Africa, which recorded a steep rise overnight. The country’s health minister, Zweli Mkhize, said on Wednesday that the number of coronavirus cases had reached 709, up from 554 a day before.

South Africa will go into a strict 21-day lockdown at midnight on Thursday in an attempt to avoid a “catastrophe of huge proportions”, said the president, Cyril Ramaphosa. He called on the 56 million people in sub-Saharan Africa’s most developed economy to show patience, courage and unity.

The lockdown will confine all but essential workers to their homes, though journeys to buy groceries or seek medical attention will be allowed. All restaurants, fast-food outlets, pubs, bars and taverns will be shut and transportation of alcohol is banned.

Bheki Cele, the police minister, said anyone thinking of ignoring the restrictions, faced six months in prison, a fine or both, and warned that two people have already been charged with attempted murder for refusing to obey orders to self-isolate.

Ministers also announced measures to increase policing of gender-based violence during the lockdown, to provide secure accommodation to the homeless and to protect prisoners.

Though South Africa has a young population, and Covid-19 is deadlier among older people, there are millions who are vulnerable because of HIV or malnutrition. The healthcare system has long had an acute lack of resources and critical facilities are extremely limited. There has been widespread panic buying since the lockdown was announced.

Other countries with high numbers of cases include Algeria, with 264, and Egypt, on 402. The first case has been reported in Libya.

Most African nations have imposed restrictions and taken a range of extraordinary measures to try to combat the crisis. Many flights have been suspended, with entries for travellers from much of Europe and the US effectively impossible.

Rwanda, Kenya and the Democratic Republic of the Congo (DRC) have all imposed curfews and lockdowns in recent days.

President Uhuru Kenyatta said that he and other top Kenyan officials would forego much of their salaries, and announced a package of support for one of Africa’s most dynamic economies.

Authorities in the DRC, which has recorded 48 cases, are seeking to isolate the capital, Kinshasa, from the rest of the country, while Ethiopia is to release more than 4,000 prisoners in an effort to decongest crowded jails, according to state media.

Mali recorded its first cases on Wednesday. Officials in the poor, unstable state recently denied reports it had only one ventilator for its 17 million inhabitants, saying it had 56.

There are fears that lockdowns will bring significant hardship for the continent’s poor, many of whom live hand to mouth without formal employment.

Health officials across Africa know hospitals can deal with only a fraction of those needing care if the virus spreads through crowded cities, remote villages and among vulnerable populations such as refugees, malnourished people or those with HIV and other chronic conditions.

South African authorities have said they will work to protect overcrowded neighbourhoods where social distancing and self-isolation are virtually impossible. The human settlements minister, Lindiwe Sisulu, said the government would reveal its strategy after consulting with communities.

Nombulelo Tyokolo, 41, a domestic worker in Cape Town who shares a one-bedroom shack with her son, said she was concerned about how the lockdown will work. “I am scared, worried and panicking about 21 days indoors,” she said. “We have to fetch water outside and go outside to the toilets. God have mercy.”

False beliefs about who is vulnerable to the virus, and how to fight it, are a serious problem on the continent, as elsewhere. Officials have warned of the danger of spreading erroneous information, and many religious leaders have called on their congregations to avoid spreading fake news.
Fartun Mohamed Nur, a 36-year-old mother of three in Mogadishu, Somalia, said she had once believed the disease would only hit non-Muslims or white people but had changed her mind after attending an information session run by a local NGO.

“I have learned that this is a virus and affects all humans. I am now going home with my children. We were told to wash hands very well,” Nur said. “I am now prepared to protect myself and my children from coronavirus.”
Christian Mulamba, a 35-year-old shoe seller in the commune of Kasa-Vubu, near Kinshasa, said coronavirus did not exist but was an excuse for politicians to make money from aid programmes. “This information is false … I don’t give a damn about the rules of hygiene,” Malamba said.