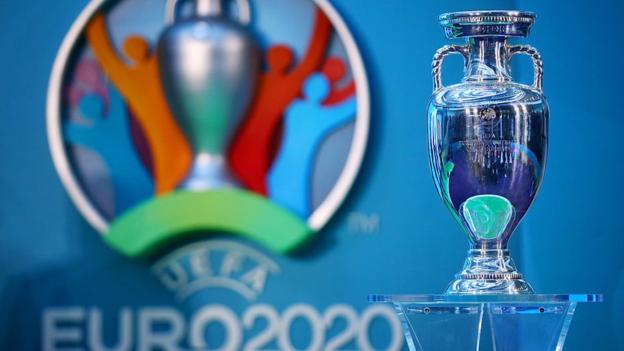 Soccer’s European Championship being played in 2021 will officially be called Euro 2020.

“The tournament will still be known as UEFA Euro 2020,” the governing body said, three days after deciding to postpone the month-long event by one year due to the coronavirus pandemic.

The tournament is scheduled to be played in 12 cities in different countries across Europe, with the final in London on July 11. Some cities, including St. Petersburg in Russia, already have Euro 2020 promotional material on display.

“We trust that all of our venues will remain the same, ensuring the tournament remains true to its original vision,” UEFA said.

Romanian soccer and public authorities announced on Thursday they renewed all obligations for Bucharest to host three group-stage games and a Round of 16 knockout game.

UEFA picked 13 host cities in 2014 but Brussels later dropped out when a stadium construction project failed to get support from public authorities. Brussels’ four games were allocated to Wembley Stadium in London.

The cost of postponing the 24-team, 51-game tournament is likely to cost UEFA “hundreds of millions” of euros (dollars), its president Aleksander Ceferin said this week.

UEFA has promised refunds on any request and “will proactively contact all ticket holders in due course.”