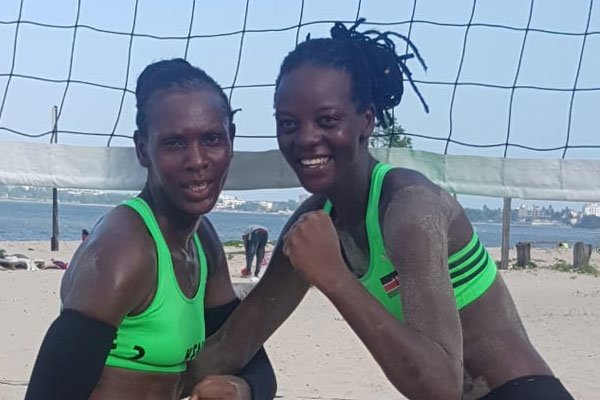 Kenya’s women’s beach volleyball team were in Mombasa Friday to begin training for the second phase of Olympic qualifiers to be held in Nigeria next month.

The event will be held March 4-8 at the Jabi Lake Beach, in Abuja.

The provisional squad of six players are the pair of Gaudencia Makokha (Kenya Pipeline) and Brackcides Agala (Prisons), Phoscah Kasisi (Kenya Commercial Bank) and Yvonne Wavinya (Prisons) and newcomers Maureen Wekesa and Veronica Adhiambo both from Directorate of Criminal Investigation (DCI) are in residential training under the stewardship of head coach Sammy Mulinge.

Kenya will line up against Cape Verde, Democratic Republic of Congo, Zambia and hosts Nigeria in the three-day event that will see the top two nations proceed to the final phase of the qualifiers.

Mulinge is optimistic the team will be ready for the event despite having only 12 days left to the qualifiers.

“Luckily all these players recently featured in the Kenya Volleyball Federation National League opener in Nyeri and therefore their fitness level is on point. What we are working on is the mental strength,” said Mulinge.

“We are aware only eight pairs will proceed to the final round at the end of the competition and we are doing everything possible to form part of those pairs. We will look at every player’s input during the training sessions and settle for best two pairs at the end.”

The women’s pair of Makokha and Agala qualified for the second round having finished second behind eventual winners Rwanda during the first round of qualifiers held in Dar es Salaam, Tanzania last month.

Meanwhile, the men’s team is scheduled to start training on Wednesday ahead of the April 12-16 Olympics qualifiers in Banjul, Gambia.

Kenya, who also finished second behind winners Tanzania last year in the first phase of the Olympics qualifier that was held in Kampala, Uganda, are drawn alongside hosts Gambia, Mauritius, Botswana and South Sudan.