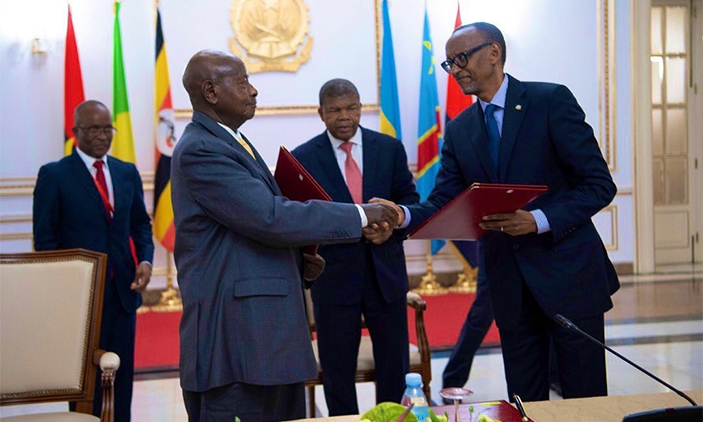 In March 2018, Africa became the largest free trade area in the world with the announcement of the Africa Free Continental Trade Area (AfCFTA), delivered by African Union Chairperson and Rwandan President Paul Kagame.

This great turning point for the African continent guaranteed a merger of over 55 countries into a single market of more than 1.2 billion people that would culminate into trillions of dollars for the African people.

Truly, Paul Kagame’s actions had finally catapulted the African continent in the spotlight and for the right reasons, this time. While speaking to the world media, a stern but soft-spoken Kagame said, “it was all possible because of the willingness of other African leaders.”

Away from the cameras, a storm was quietly brewing and it was soon to spill over for the entire world to see. Neighbouring Uganda and Rwanda were at loggerheads again.

Despite sharing borders and belonging to the same economic bloc Uganda and Rwanda have often harboured hard feelings towards each often ensuing from economic and political differences.

Presidents; Yoweri Museveni and Paul Kagame, whose histories are intrinsically linked are slated to have another set of talks this week after more than one year of soured relations.

So what went wrong?

8th March 2019 – Rwanda decides to close its busiest border crossing with Uganda disrupting trade and increasing tension between both countries.

The Kigali Government issues a statement saying it needs to carry out road repairs at the Katuna (Gatuna) border post.

All Rwandan travellers to Uganda from that point onwards were strongly advised by Rwandan Immigration not to cross over to Uganda, warning that they might be arrested.

Rwandan Foreign Affairs Minister Richard Sezibera said that, while “no one is stopped from travelling to Uganda,” Rwandans were advised against it.

Uganda Government Spokesperson Ofwono Opondo in a tweet, responds “government has yet to establish whether there is another reason beyond the road construction work”

According to the latest World Bank Data from 2017, Rwanda was Uganda’s fifth biggest export market, selling about $180m worth of goods. Rwanda meanwhile exported $10m worth to Uganda.

The deceased who was identified as Elizabeth Mukarugwiza was a resident of Kinigi village, Nyamirima parish in Musanza district, Rwanda.

It is believed she crossed over into Kisoro district in search of food.

28th November 2019- 23 Ugandans working in Rwanda are expelled over the weekend under unclear circumstances and are dropped off at Kyanika Border Post.

The Ugandans were working with road construction companies and many of them were from Nebbi and Tororo districts.

The meeting that had been earlier scheduled for 18th November was pushed forward at the request of the Rwandan Government.

August 21st 2019– President Yoweri Museveni and his Rwandan counterpart Paul Kagame hold the second round of talks in Luanda, Angola to find the last solution to mild existing differences between the Uganda and Rwanda.

Erike Bizimana and Emmanuel Mbabazi both Rwandans crossed into Uganda to visit their relatives in Kabingo village through the un-gazetted border entry of Kabingo Trading Centre and on return, their cousin Ndagijimana opted to escort them.

After crossing into Rwanda for about 3km at Kumugu Trading Centre in Musanze district, Rwanda, they were shot dead by Rwandan security officials that suspected them to have been smugglers.

January 20th 2020- Four Policemen who were arrested over kidnap of former bodyguard to Rwandan President Paul Kagame are released on bail pending trial.

14th February 2020– The Ad Hoc Commission on the implementation of the Luanda Memorandum of Understanding between Rwanda and Uganda meet in Kigali, Rwanda for the third time.

The 13 were paraded before the media in Kampala on Tuesday, February 18, 2020, by the Ministry of Foreign Affairs officials.